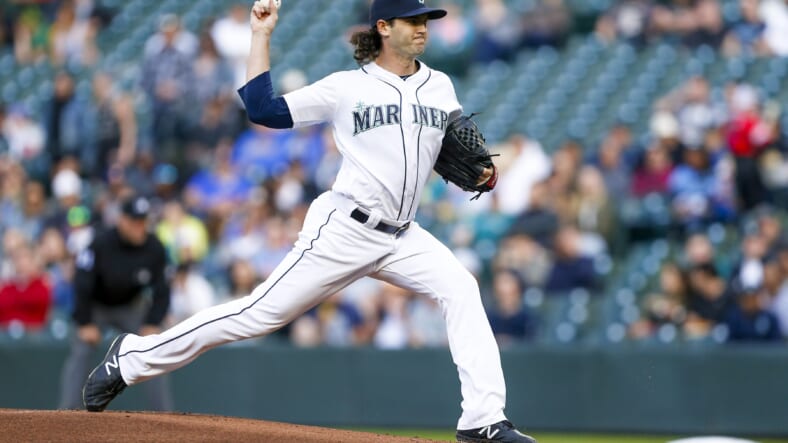 Cory Gearrin? Domingo Acevedo? What are the New York Yankees up to? Who are these players and what exactly escalated behind the scenes on Friday?

Gearrin, the 33-year-old RHP from Chattanooga, Tennessee, was recently acquired off waivers from the Seattle Mariners. To make room on the 40-man roster, the New York Yankees made an abrupt decision to release Domingo Acevedo and added Gearrin to the active roster. In doing so, RHP Jonathan Loaisiga was optioned down to improve on his craft in Scranton.

Just as I did with Trevor Rosenthal in a previous article, I want to examine Gearrin’s career numbers and better educate those who are not familiar with him. Gearrin has pitched for a number of organizations, including the Atlanta Braves, Oakland Athletics, San Francisco Giants, Seattle Mariners, and the Texas Rangers. While this may seem especially alarming, let’s dive into his stats before conveying a final conclusion.

There is good news in the story. Gearrin is expected to acquire a 3.59 BB/9 this season, which is a step in the right direction. Although this is just speculation and nothing to take with a grain of salt, Gearrin has the potential of producing quality outings with the Yanks. If he can find his groove with the sinker. which he has utilized about 53% of the time throughout his career, he will prove to be very sufficient and useful.

As far as Domingo Acevedo is concerned, he is a 25-year-old RHP from Villa Los Almacigos, Dominican Republic. Acevedo has been a part of the Yankees farm system since 2013, posting a 3.02 ERA and a 1.16 WHIP in 7 seasons. Even though Acevedo has better numbers, he also has no experience in the majors. Will the deal work out in the end? Only the future will paint that picture. The signing itself can’t hurt the Yanks, especially since they’re in desperate need for pitchers who perform exceedingly well on a consistent basis.