The New York Yankees should be the Evil Empire they've resurrected this offseason and add fireballer Ken Giles to their bullpen, and here's why. 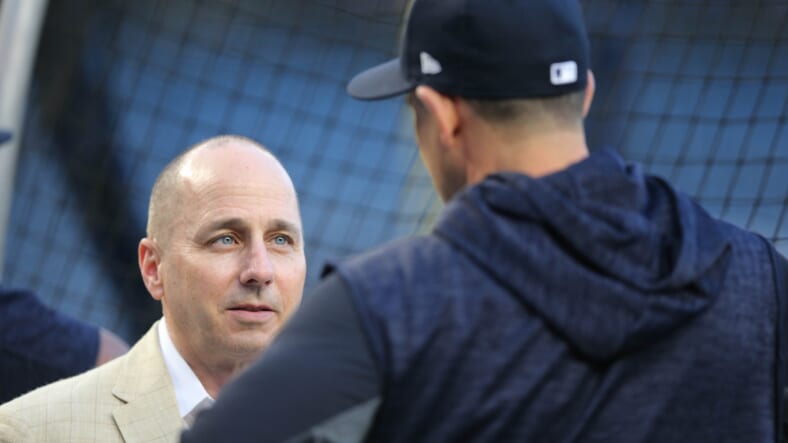 The New York Yankees have the main components of a championship team. They have the lineup to clobber opposing teams and give the pitchers ERAs that are as high as their temperatures, a rotation that can set hitters down with their eyes closed, and a bullpen that gives hitters nightmares to deal with. There’s no way this team can get much better right? With the signing of Gerrit Cole, the Yankees have restored their Evil Empire status, so they’ve already reclaimed their villainous throne. However what would make this team even more evil and great? Adding the power pitching Ken Giles to the bullpen.

Filling In For Betances

The New York Yankees lost prominent reliever Dellin Betances to the crosstown rival New York Mets. It’s a small victory for the Mets, but wouldn’t it be a classic Evil Empire move to the acquire a younger version of him who’s not going to be injured for most of the year. When looking at Ken Giles VS Dellin Betances, it’s clear that Betances is more dominant than Giles, however when looking at Giles’ 2019 you see a very Betances-like season.

With numbers like that, the Yankees would love to add Giles as a one-year rental and be their righty fireballer.

A Slider That Cannot Be Touched

Ken Giles slider takes filthy to a whole new level, being flat outÂ dominant. When stacked against other sliders in baseball, it’s in the top tier of sliders. When stacked up against sliders, here’s how Giles holds up:

Fielding insane peripherals, Ken Giles’ slider is incredible and something that makes his slider incredible. When you are coming out of the bullpen, getting those big outs and having that money pitch is was defines a great reliever. If the Yankees want a great slider out of the ‘pen, Giles is their guy.

The New York Yankees have a lot of power pitchers, and having another would not hurt. Ken Giles is the definition of a power pitcher, as he is 35th out of 517 pitchers in average fastball velocity. With that number clocking in at 96.9 MPH, it’s no surprise that he blows batters away when he can effectively use it. This coming from the right-hand side can pair nicely with a closer like Chapman who does the same from the left side. The Yankees could add a workhorse with a cannon to the bullpen but at what price?

What Would It Take To Land Giles?

The New York Yankees would need to part with some prospects, but not too may for a reliever:

The Yankees would send-off a power bat in Clint Frazier and a hard-throwing righty in Jonathon Loasiga, both are players with lots of potentials that simply don’t serve a role for the Yankees. The Yanks would get their guy for the bullpen and have the best bullpen in baseball without a doubt.

Would you make this deal if you’re the Yankees or Blue Jays? Let me know in the comments below.