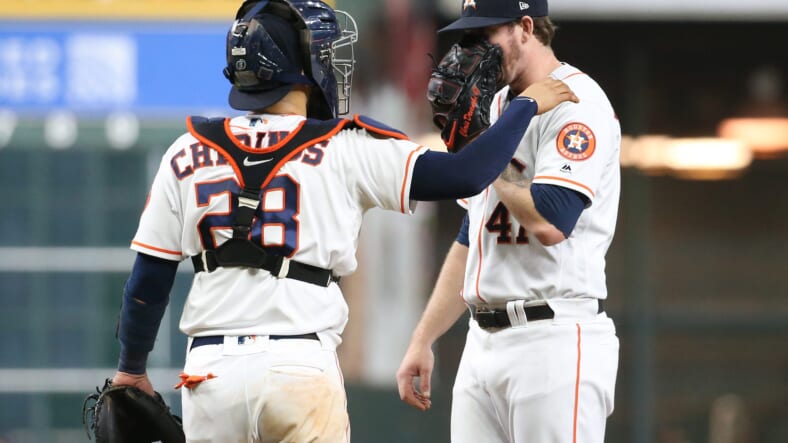 The New York Yankees have a new catcher in town, Robinson Chirinos. With the hiring, the Yankees have addressed having only two catchers to start the 2021 season. The retirement caused the void at the end of the last season by catcher Erik Kratz. Kratz was the backup catcher that caught Deivi Garciaâ€™s Major League debut. If either Gary Sanchez or Kyle Higashioka were to be injured, the Yankees would have no backup catcher. To resolve that, they signed veteran catcher Robinson Chirinos.

The 20-year veteran catcher adds a new and interesting wrinkle to the Yankee catching situation: he was a personal catcher for Yankee ace Gerrit Cole when the two were with the Houston Astros. In a surprising move by Yankee manager Aaron Boone, he has announced that Kyle Higashioka will not be Gerrit Coleâ€™s personal catcher in 2021. He said in spring training Cole would pitch to Sanchez and Higashioka.

The very nice day, Cole, in an interview, started with a mention of his former Astros teammateÂ  Robinson Chirinos. â€œLetâ€™s not forget the third catcher that we have in Robinson,â€ Cole said. The bottom line for the Yankees is that they have picked up an adequate catcher to fill in. How big a role he ends up playing, only the season will tell. However, Gerrit Cole pitched yesterday in the first live batting practice; he pitched to Gary Sanchez.

I fully understand playing around with other catchers in spring training,Â  but I find it perplexing why Boone would remove Kyle Higashioka as Cole’s personal catcher in the regular season. The simple fact was that Cole was excellent when the game was called by “Higgy,” and not so much when throwing the ball to Sanchez. So much so that Higashioka became Cole’s personal catcher as the season progressed and in the postseason.

When being caught by Gary Sanchez, Cole had an ERA of 3.91 over eight starts last season, and Cole seemed to struggle in those starts. After switching over to Kyle Higashioka, he struggled less. Higashioka caught Cole in seven starts, including the postseason â€” Cole finished with a 1.79 ERA. Although Cole had a good season with a record of 7-3 in the short season, his combined ERA was 2.84. 3.91 or 1.79, which would you choose? It’s always been my belief that if it isn’t broke, don’t fix it. But obviously, manager Boone has other ideas.

So now, with Cole having no particular catcher, newly acquired Robinson Chirinos enters the picture. Chirinos was Cole’s personal catcher for 16 games. In those 16 starts two years ago, Cole had a 2.46 ERA. In a recent interview, Chirinos had this to say:â€œ In 2019, we were able to be on the same page,â€™â€™ Chirinos said. â€œGerrit is a tough guy to catch. He likes to talk. It was a challenge.â€ So it’s ERA 3.91 with Sanchez, 2.46 with Chirinos, and 1.79 with Higashioka; why would you fool with success?

Robinson David Chirinos Gonzalez is 36 years old and was born in Punto Fijo, Venezuela. He signed with the Chicago Cubs as a non drafted free agent in 2000. He is a 20 year veteran of the game. He made his Major League debut with the Tampa Bay Rays in 2011. He has also caught for the Houston Astros, Texas Rangers, and the New York Mets before coming to the New York Yankees.

Although a catching journeyman, Chirinos is not an upgrade from Sanchez as he is not a good hitter, he has a career batting average of .231, and last year between two teams, just .162, just a few batted balls better than Gary Sanchez. Chirinos also lets runners steal bases at will. He is a good defender and calls a good game. Chirinos will start the season at Scranton Wilkes/Barre and will likely only be used if Sanchez or Higashioka gets injured. Could Boone’s plan be to use Sanchez to rebuild his confidence, and if he fails, use a tandem of Higashioka and Chirinos. Only time will tell, but it will be an interesting storyline to follow.

Robinson Chirinos was only given a one-year minor league contract, so it didn’t cost the Yankees anything if it is an experiment. But Chirinos doesn’t see himself playing in the minors. Talking to the media, Chirinos commented on his place with the New York Yankees.

â€œThatâ€™s not where I have my mind right now,â€™â€™ Chirinos said. â€œI know those guys are really good and have been here a long time. I came in this spring to show Iâ€™m healthy, let [the Yankees] choose and make a decision.â€ He also mentioned Gary Sanchez. â€œHeâ€™s working hard,â€™â€™ Chirinos said. â€œThatâ€™s the only thing you ask as a teammate. Hopefully he turns around and leaves the bad years in the past. Heâ€™s a huge key for this team.â€