New York Yankees Recap: Yankees squeak past the Rangers for the 4-3 win 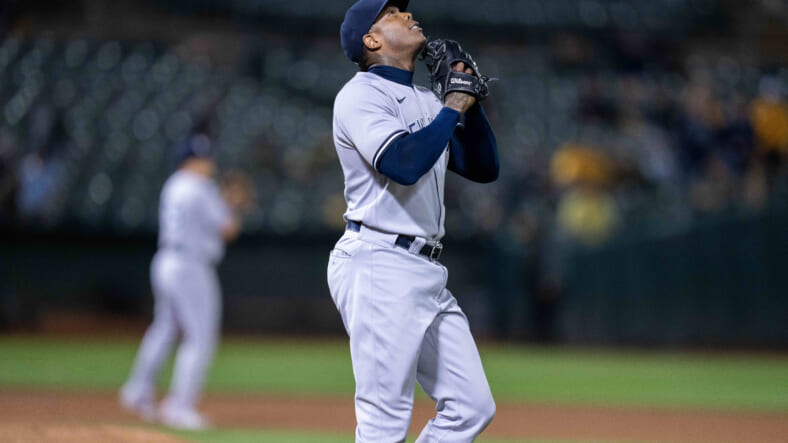 Tonight with new urgency, the New York Yankees entered a three-game series with the Texas Rangers after losing two of three against the Cleveland Indians and slipping out of a wild card berth. The Yankees need to sweep a series off this Texas team playing just .369 baseball this season. The Yankees started Nestor Cortes Jr. facing the Rangers. The Yankees made their first step to get back into the wild card with a 4-3 win.

Isiah Kiner-Falefa led off for the Rangers and singled against Cortes. Andy Ibanez followed up with another single up the middle. The runners advanced on a wild pitch. Adolis Garcia stuck out on a Cortes slider. DJ Peters struck out looking. Nat Lowe struck out, and “Nasty Nestor” got out of the inning, leaving two on base. At the bottom, DJ LeMahieu popped out to first. Anthony Rizzo ground out. Aaron Judge walked. Giancarlo Stanton flew out to the deep center to end the inning. No score.

Nick Solak led off the second inning for the Rangers and ground out to second. Jonah Heim went down looking. Charlie Culberson flew out to a diving Gallo in left. At the bottom, the same Joey Gallo led off by trying for a bunt but was out. Gleyber Torres popped out to right. Gary Sanchez homered into the left-field stands getting the Yankees on the board first. Brett Gardner ground out to end the inning. New York Yankees 1, the Rangers 0.

The third inning was led off by Leody Taveras, who hit back to Cortes, who fielded an excellent out. Kiner-Falefa popped out to second. Ibanez struck out with Cortes putting down nine Rangers in a row. At the bottom leading off was Gio Urshela, who flew out to short right. LeMahieu walked. Rizzo hit one far out into the stands, but just right of the foul pole in right. Then duplicated it. He ended up singling to left-center. With two on and one out, Judge doubled to right, scoring LeMahieu for a tack-on run for the Yankees. Stanton, still with two on and one out, flew out to center with Rizzo scoring. Joey Gallo with two outs and Judge on second walked. Torres, with two on and two outs, singled, driving Judge from second. Gary Sanchez, who already homered in the second, walked to load the bases for Gardner, who struck out swinging to end the inning. New York Yankees 4 the Rangers 0.

The fourth inning was led off by Adolis Garcia, who popped back to catcher Sanchez. Peters struck out on a foul tip. Lowe walked. Solak also walked. Heim stuck out. At the bottom, Urshela ground out to the pitcher. LeMahieu walked. Rizzo also walked. Aaron Judge faced the new Ranger pitcher Jharal Cotton and flew out to deep center. Stanton struck out. New York Yankees 4 Rangers 0.

The fifth was led off by Culberson, who homered to left. Taveras hit a ground-rule double. Falafa doubled, scoring Culberson. Ibanez ground out to Gardner in center, and that was the night for Cortes Jr. Chad Green replaced him. A wild ball let Taveras advance to third. Facing Garcia, he flew out to Gardner, scoring Culberson. Peters flew out. At the bottom, Gallo had a towering pop out to right. Torres walked. Sanchez went down looking. Gardner chopped out to first to end the inning. Yankees 4 Rangers 3.

Leading off the sixth was Lowe, who ground out. Solak chopped in front of Sanchez, who made the play to first for the out. Heim struck out looking. Urshela led off the bottom by singling, going the other way. LeMahieu ground into an around-the-horn double play. Rizzo ground out to third to end the inning. Yankees 4 Rangers 3.

Culberson led off the seventh inning with Clay Holmes pitching by striking out. Taveras tapped back to Holmes. Kiner-Falefa to first. At the bottom, Judge singled to second. Stanton went down on strikes. Gallo struck out swinging. Gleyber Torres faced the new Ranger pitcher Spencer Patton and singled to center. Sanchez, with two on and two outs, lined out directly to short. Yankees 4 Rangers 3.

In the eighth, Ibanez, against Holmes in his second inning of work, singled over Urshela’s head. Yonny Hernandez was brought in to pinch run. Garcia struck out swinging. Peters ground out to third for a force-out. Lowe faced new Yankee pitcher Joely Rodriguez and reached on an infield single. Solak struck out. Gardner led off the bottom by popping out to the catcher. Urshela tapped back to the pitcher. LeMahieu tipped into the catcher’s glove for the final out. Yankees 4 Rangers 3.

At the top of the ninth inning, the Yankees send in closer Aroldis Chapman facing Heim, who stuck out put out. Culberson grounded out to third. Taveras, as the last hope for the Rangers, struck out for the Yankee win. The final score was the New York Yankees 4 and the Texas Ranger 3. The winning pitcher was Chad Green and the loser was A.J. Alexy. Aroldis Chapman got his 28th save of the season.