New York Yankees Recap: Yankees lose to the Rays in their worst game yet 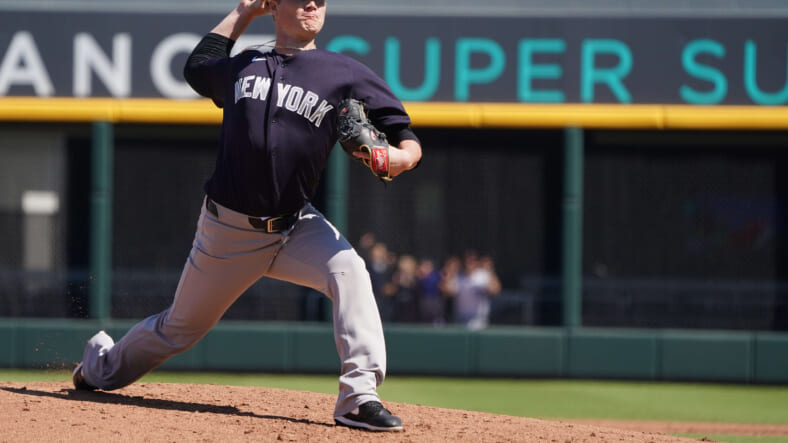 Tonight the New York Yankees met up with the Tampa Bay Rays at Yankee Stadium for the second series of the young season. In their first meeting, the Rays took 2 of 3 games from the Yankees. Nick Nelson took the mound with tensions high between these two teams as the Yankee’s opener against The Ray’s reliever Michael Wacha. Never pitcher has fared very well in the season so far. It was a chilly and raw evening at Yankee Stadium at game time. At least the field wasn’t covered in snow as it was for the Red Sox at Coor’s Field in Colorado. The Yankees lost the game 8-2.

Austin Meadows led off for the Rays against Nick Nelson at the top of the first inning. Randy Aronarena singled down the left-field line, and Meadows went to third base. Brendon Lowe doubled, scoring Meadows and Aronarena for the two-run Rays lead. Diaz ground out, but Lowe advanced to third base. Joey Wendle with a man on and one out struck out. Margot walked. Michael Brosseau struck out, but the Rays picked up two runs for the Rays lead. At the bottom, DJ LeMahieu lined out sharply to shot, and Aaron Judge struck out. Gleyber Torres ground out to end the -2-3 inning for Wacha. Rays 2 Yankees 0.

Michael King led off for the Yankees and replaced Nick Nelson that only lasted one inning, giving up two runs. Adames singled. Mike Zunino struck out. Meadows struck out, and Arozarena lined out to short to end the half for a perfect second for King. Giancarlo Stanton led off the bottom for the Yankees, and he popped out to first. Gio Urshela got a one-out single to right.Â  Aaron Hicks struck out. Gary Sanchez lined out to third to end the inning. Rays 2 Yankees 0.

Against Michael King, Lowe was hit by a pitch in the third. Diaz singles, and Lowe went to third. Joey Wendle, who struck out in the first inning, stuck out. Margot lined out, but the ball hit Diaz on an error by Odor. Brosseau struck out, getting King out of trouble and leaving two Rays on base. At the bottom, Clint Frazier led off striking out as his early-season struggles continued. Rougned Odor struck out. Lemahieu lined out to Arozarena to end the inning.

Willie Adames lined out for the first out of the fourth inning Mike Zunino grounded out to third, and Austin Meadows walked. Arozareno walked. Brendon Lowe walked for three straight walks for King. Diaz hit up the middle to Odor for the final out, leaving the bases loaded with Rays. Aaron Judge led off the bottom, striking out. Torres walked. Stanton and Gio Urshela went down on strikes. The Yankees have only been able to get one hit in the first four innings. Rays 2 New York Yankees 0.

With Luis Cessa replacing Michael King, who had three shut-out innings, Joey Wendle started the fifth inning by beating out a throw by Urshela for a single. Margot struck out. Brosseau hit one down the left-field line for a double, scoring Wendle for the 3 run lead over the Yankees. Adames doubled, and Brosseau beat out a throw to home for another Rays run. Zunino walked on four pitches. Meadows walked, loading the bases for the Yankees’ seventh walk of the game. Arozareno doubled at the Yankees failed to make a double play scoring two Ray’s runs for the six-run Yankees shutout. Lowe struck out the Rays lead the game 6-0.

At the bottom of the fifth Aaron Hicks against Aaron Hicks, Wacha through four had allowed only one Yankee hit. Hicks popped out to the infield. Sanchez struck out. Clint Frazier, who looks lost at the plate lately, struck out for a 1-2-3 inning for Wacha. Rays 6 Yankees 0.

At the top of the sixth, Diaz led off against the New York Yankee’s Lucas Luetge, and Diaz singled. Wendle singled. Margot singled to load the bases with no outs. Brosseau drove to short, and the throw was in time to get Diaz. Adames popple out to Urshela. Zunino flew to left, and Frazier couldn’t get to it, and another two Ray’s runs scoring for the 8 run Rays lead. Meadows flew out to Hick to finally end the half, but it’s the Rays 8 and the Yankees 0. At the bottom, Odor walked. LeMahieu popped out to the infield. Aaron Judge hit into a double play to end the ending as the Yankees again failed to score. Rays 8 Yankees 0.

Arozarena led off the seventh inning off Luetge, grounding out to Urshela. Lowe flew out. Diaz flew out for the first inning. The Yankees put down the Rays 1-2-3. At the bottom, Torres picked up a single. Stanton hit a no-doubter to center to get the Yankees 2 runs on the board. Urshela lined out. Hicks lined directly to first for two outs. Sanchez struck out to end the inning, but the Yankees finally got on the board with two runs. Rays 8 Yankees 2.

Luetge out for his third inning allowed Wendle a single. Margot hit into a 1-4-3 double play for two outs. The Rays challenged, but the out was maintained. Brosseau lined out to the pitcher for the final out of the half. Frazier led off the bottom, but frustrated fans started to throw balls out onto the field, halting the game. Frazier, after play resumed, struck out for the third time in the game. Odor flew out to the far center. LeMahieu struck out, going 0 for 4 on the night. That ended the inning. Ray 8 Yankees 2.

At the top of the eighth, Kyle Higashiokia took over for Sanchez behind the plate. Willie Adames led off for the Rays by striking out. Zunino struck out. Meadows allowed Luetge to strike out Ray’s side. At the bottom of the inning, with the last licks on the line for the Yankees, Aaron Judge led off the half by grounding out. Torres struck out, and Stanton followed with another strikeout to end the game. The final score was the Tampa Bay Rays 8 and the New York Yankees 2. The winning pitcher was Michael Wacha, and the loser was Nick Nelson.