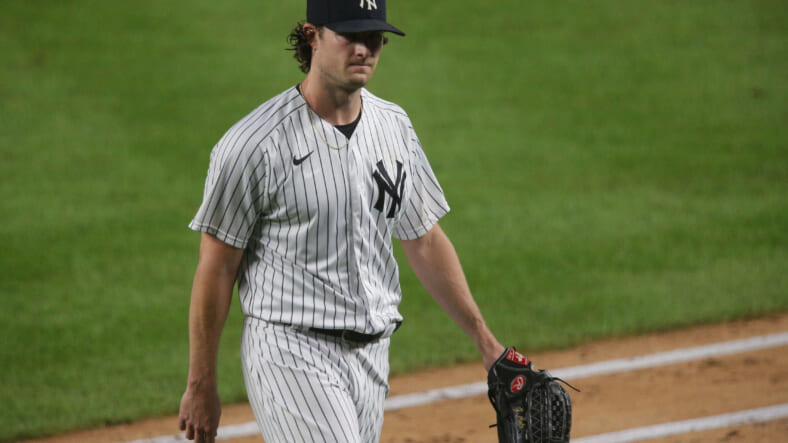 Today was the finale of a three-game series between the New York Yankees and the Tampa Bay Rays. The Rays won the first two games at Yankee Stadium. Today’s game started with the Yankee ace Gerrit Cole on the mound for the Yankees and Andrew Kittredge for the Rays. Both had 2-0 records and ERA’s in the 1’s. It was the first start for Kittredge, who had four relief appearances strike out 4 batters. It was Gerrit Cole’s 4th game as a starter; he had 29 strikeouts on the season.

Yandy Diaz led off for the Rays against Gerrit Cole, and Cole struck him out. Austin Meadows hit a sky-high popout to Aaron Hicks. Manuel Margot ground out for an easy 7 pitch inning for Cole. The Yankees came in the bottom, and DJ LeMahieu led off against Kittredge, who struck out DJ. Aaron Judge struck out. Aaron Hicks flew out to left, making it a quick inning for both pitchers. No score.

At the second, Brandon Lowe led off against Cole and ground out Lowe. Mike Brosseau struck out. Joey Wendle got hit on the foot and advanced to first. Yashi Tsutsugo flew out to a diving Judge. At the bottom, Giancarlo Stanton led off, and he hit his 3rd home run of the season. Gleyber Torres ground out to second base. Gio Urshela struck out. A pitching change brought Ryan Yarbrough to the mound to face Rougie Odor. He hit Odor, and he advanced to first base. Clint Frazier went down on strike, but Stanton’s home run put the Yankees ahead. Yankees 1 Rays 0.

Zunino led off the third against Cole and singled to left. Kevin Kiermaier, just off the IL, hit his first pitch for a single due to a bobbled ball by Hicks in center. Diaz, with two on and no outs, singled, driving in Zunino. Hicks again bobbled the ball. Meadows struck out. Margot flew on another poor throw from Frazier, the overshot second base, scoring Kiermaier. Lowe struck out to end the half, but the Rays took the lead. At the bottom, Higashioka flew out to far left. LeMahieu flew out, and Judge flew out to end the inning. Rays 2 New York Yankees 1.

Brosseau led off the top of the fourth and struck out against Cole. Joey Wendle flew out to Clint Frazier. Tsutsugo also flew out to Frazier for a 1-2-3 inning for Cole. Cole, through four innings, threw 64 pitches with 5 strikeouts and not walking a batter. At the bottom, Aaron Hicks popped out on his first pitch. Stanton struck out swinging. Torres flew out as Yarbrough had put down seven Yankees in a row. Rays 2 Yankees 1.

At the top of the first, Zunino led off by striking off against Cole. Kiermaier struck out for his seventh strikeout of the game. Diaz chopped out to Torres as Cole put down nine straight Rays. Gio Urshela led off the bottom by hitting a stand-up double to right. Odor hit back to the pitcher. Frazier ground out to short, holding Urshela at second. Higashioka walked. LeMahieu, with two on and two outs, hit an RBI single, driving in Urshela without a throw.Â  Judge with two on went down swinging, leaving two Yankees on base, but the LeMahieu single tied up the game at 2 apiece.

Austin Meadows led off the sixth inning, facing Cole, who had thrown 82 pitches. Meadows struck out for Cole’s eighth strikeout. Margot flew out to Hicks. Lowe struck out for a 1-2-3 inning, 9 strikeouts, and putting down 12 Rays in a row for Cole. Aaron Hicks led off the bottom by popping out to center. Stanton worked a walk. Torres popped out to second. Urshela tapped back to Yarbrough to end the inning. Yankees 2 Rays 2.

Brosseau at the seventh ground out. Wendle singled to center. Tsutsugo got an RBI double driving in Wendle for the Ray’s lead. With 109 pitches, that was the end of Cole’s day; Chad Green replaced him. Zunino popped out behind the plate. Kiermaier flew out to Hicks to end the half. Rougie Odor led off the bottom and struck out. Frazier flew out right to Kiermiaer. Higashioka faced Diego Castillo. He walked. LeMahieu gave it a ride but was called out on the warning track. Rays 3 New York Yankees 2.

Diaz led off the eighth walking. Meadows struck out as Phillips, running for Diaz, was caught stealing on an excellent throw by Higashioka. Margot flew out to Judge to end the half. Aaron Judge led off and struck out at the bottom, going 0-4 in the game. Hicks flew out to center. Stanton struck out to end the inning. Rays 3 Yankees 2.

At the top of the ninth, Lowe popped out to Torres. Chad Green was replaced by Darren O’Day, facing Brosseau, who lined out to Frazier. Wendle, who was becoming the “Yankee Killer,” hit a home run to right field. After the hit, he was 16-33 against Yankee pitching. Tsutsugo stuck out to end the Rays half, but the Rays picked up an insurance run. With last licks on the line for the Yankees, Gleyber Torres came to the plate and struck out. Gio Urshela rolled out to Brosseau. Odor lined out to end the game as the Rays swept the Yankees.

The final score was 4-2 as the Rays swept the New York Yankees. The winning pitcher was Jeffery Springs, and the loser was Gerrit Cole. The Yankees could only muster up three hits in the game. The loss is the Yankees’ sixth series loss against the Tampa Bay Rays.