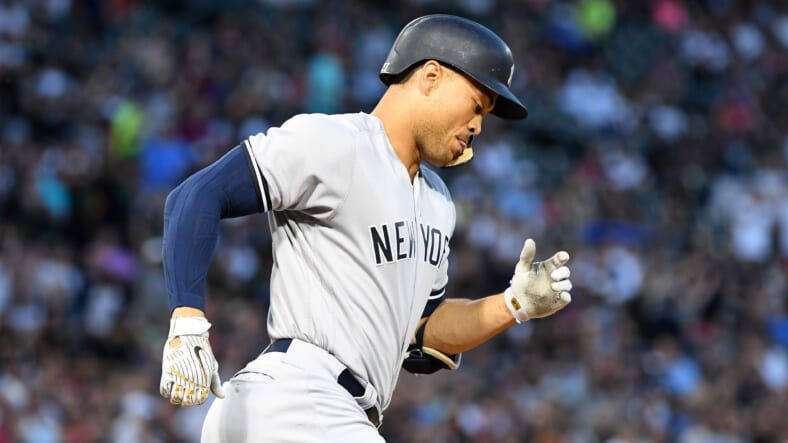 With the win over the Red Sox last night and the loss by the Toronto Blue Jays, the New York Yankees have a bit of breathing room in holding on to the number two wild-card berth. But, make no mistake about it, the urgency to win today is still their big time as the Yankees want that home-field advantage for the winner takes all wild-card game. So, to obtain that goal and win the series from the Red Sox, the Yankees sent Nestor Cortes Jr. to the mound to face Eduardo Rodriguez. The Yankees won game two 5-3.

At the top of the first inning, Brett Gardner led it off for the Yankees by lining out to short. Aaron Judge popped out to second base. Anthony Rizzo popped out to Devers at short for an easy inning for Pivetta. At the bottom, Nestor Cortes Jr. took the mound facing Kiki Hernandez, who flew out to Judge in right field. Hunter Renfroe flew out to Gardner in left-center. Rafael Devers flew out to Judge as Cortes put down the Sox in order. No score.

Giancarlo Stanton led off the second inning by being the first base runner of the day with a sharp line drive to the right-field wall for a single. Joey Gallo went down looking. Gleyber Torres went down swinging. Gary Sanchez also struck out swinging, stranding Stanton at first base. At the bottom, Xander Bogaerts went down on strikes. JD Martinez went down swinging. Kyle Schwarber flew out to Gallo in left for another 1-2-3 inning for Cortes. No score.

The third inning was led off by Rougie Odor, who played at third due to DJ LeMahieu’s groin issue. He was robbed of a home run by Renfroe, who caught his flew ball just over the right-field wall. Gio Urshela ground out to Devers at short. Gardner ground out to second. Bobby Dalbec led off the bottom by going down looking. Kevin Plawecki hit a homer up into the green monster of the light tower. Jose Iglesias popped back to Sanchez. Hernandez flew out to Judge in right, but the Red Sox got on the board. Red Sox 1 Yankees 0.

Joey Gallo led off the fifth inning by going down swinging. Torres struck out. Sanchez contributed to another strikeout of the side for Pivetta. At the bottom, Schwarber singled to right field. Dalbec hit one over the right-field wall that Judge amazingly caught. Plawecki singled to center, and that was the day for Cortes Jr. Iglesias faced the new pitcher Michael King and reached on a slow roller down the left infield. A wild pitch by King allowed Plawecki to score. Hernandez went down on a King curveball.Â  Renfroe struck out swinging, leaving two Sox on base, but the Red Sox tacked on another run. Boston 2 New York 0.

Rougie Odor led off the sixth by flying out to left field. Urshela got a one-out single to left. Gardner doubled moving Urahela or third base, concluding Pivetta’s day on the mound. Aaron Judge faced new Sox pitcher Hansel Robles. A Robles wild pitch let Urshela score. Judge reached on a fielder’s choice with Gardner out at home. Rizzo popped out to second, but the Yankees cut the Red Sox lead in half. At the bottom, with King still on the mound, Devers singled to center. Bogaerts lined out to Gardner in center. Martinez lined out to Judge, bringing in new pitcher Lucas Luetge to face Schwarber, who lined out to first to end the inning. Boston Red Sox 2 New York Yankees 1.

The seventh inning was led off by Giancarlo Stanton, who walked. Gallo walked, Torres, hit into a double play. Sanchez went down swinging. At the bottom, Dalbec facing Luis Severino, struck out on a slider. Plawecki walked. Iglesias hit into a force out. Hernandez went down on a Severino changeup. Red Sox 2 Yankees 1.

Rougie Odor led off the eighth inning by going down on strikes. Urshela struck out swinging. Gardner walked with Judge coming up. Gardner stole second. Aaron Judge, with one on and two outs, walked. Rizzo faced new pitcher Darwinzon Hernandez and got hit by a pitch loading the bases. Giancarlo Stanton grand slammed, putting the Yankees ahead by three runs. The ball over the monster went 452′ into the Boston night. Gallo struck out. At the bottom, Renfroe against Severino struck out. Devers flew out to Gallo in left. Martinez struck out swinging for a dominant two innings for Luis Severino. New York Yankees 5 Boston 2.

The final score was the New York Yankees 5 and the Boston Red Sox 3. The winning pitcher was Luis Severino, and the loser was Tanner Houck, with the save going to Aroldis Chapman (29). The Yankees won the series and now share the number one berth with the Red Sox in the wild-card after winning five games in a row.