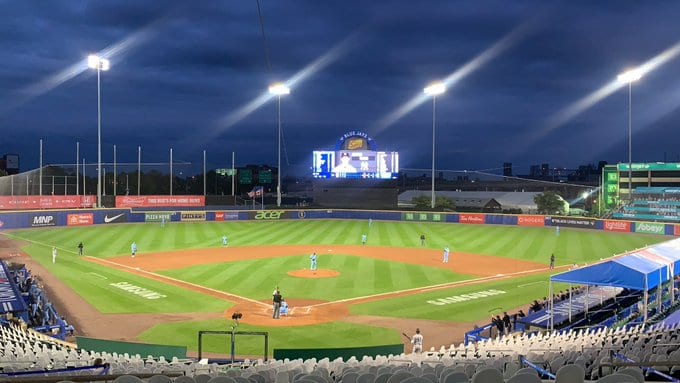 The New York Yankees took to the field at Sahlen Field in Buffalo hoping to turn things around and get their 22nd win on the season. What happened is what’ been happening a lot of late, they turned a prospective win into a disastrous loss. In the sixth inning last night, the Yankees gave up ten runs, something the Yankees haven’t done in a single inning since 2015 against the Rangers.Â  The team seems to be lacking energy, and even manager Aaron Boone is showing frustration with the team going 5-14 in their last 19 games.

The game started favorably for the Yankees. Luke Voit hit a solo shot to left, then Aaron Hicks clobbered a homer to left to give the Yankees a 2-0 lead in the 1st inning. Over the next two Blue Jays halves, Yankee Starter Jordan Montgomery gave the two runs back. The Yankees picked up another run in the fourth when Miguel Andujar solo homered.Â  In the fifth Clint Frazier hit a line drive double driving in two more runs for the 5-2 Yankee lead.

Montgomery only went 3.1 innings for the Yankees. Jonathan Holder came in a pitched 1.2 clean innings, maintaining the 5-2 Yankee lead. That would be the last lead of the game for the Yankees. At the bottom of the sixth inning, Aaron Boone brought in Chad Green. Green waked to and allowed four runs, three earned.Â  Seeing that Green didn’t have it, with men on base Boone sent Adam Ottavino in to clean up Green’s mess.Â  Ottavino who does not pitch well with men on base made things worse, much worse.

Ottavino seemed to be paying attention to everything except making his pitches. He relied on his fastball, which is unusual because he mostly relies on his sweeping slider. Ottavino ended up giving up six earned runs without recording a single out, as the Blue Jays picked up 10 runs in the 47 minute bottom of the sixth inning. Yankee pitchers ended up throwing 67 pitches in the inning before Luis Cessa came in to finally shut down the Blue Jays offense.Â  Cessa pitched 1.2 scoreless innings and Clarke Schmidt pitched a scoreless eighth.

All the damage was done in the sixth inning as the bullpen totally failed to hold the Yankee lead. All this, on a night that the Yankee offense finally came to life, scoring seven runs for the first time in five games. The Yankees have gotten themselves into a situation that dictates when the hitters hit, the pitchers fail. When the pitchers do their job, the hitters remain silent. It’s a scenario that the Yankees have to find their way out of.Â  Reid-Foley got the win and Adam Ottavino took the loss for the Yankees.

Those interviewed after the game was asked about the Yankee’s confidence, and all answered that this still has confidence, but the teams demeanor says something else.Â  They don’t seem to have the intensity needed, the energy of the will to change things.Â  Even Boone is showing frustration. At one point the television cameras zoomed in on Boone with the elbows up and his head down between his elbows.Â  That does not exude confidence.

Boone keeps making the same mistake, over and over again this season. He leaves pitchers that don’t appear to have it, in too long, almost to the point that there is no return. In an after the game interview, Adam Ottavino explained that he doesn’t have the answers for his poor pitching lately. For the Yankee fan, it appeared he was speaking for the entire team’s performance.

The New York Yankees would like to be the number one team in baseball.Â  However, the fact is, they aren’t even the number one team in New York. That team is the Blue Jays. The Yankees have got to find some answers, and find them fast.Â  There are only 19 games left in the season, and the Yankees are 6.5 games behind in the East.Â  Of those 19 games yet to be played, 9 of them will be against the Blue Jays.

Tomorrow is another day, hopefully with different results.