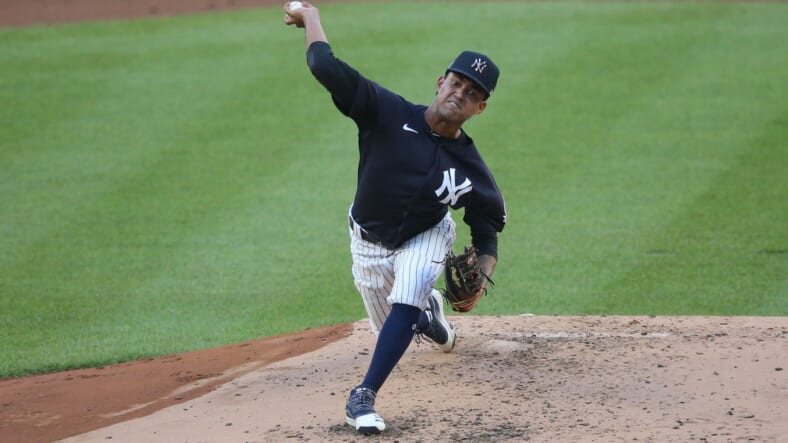 The New York Yankees were back at home at George M. Steinbrenner Field today to play the Toronto Blue Jays. The starting Yankee pitcher was Deivi Garcia, and the start for the Jays was Trent Thornton. Like most spring training games in Florida, it was a nice day for a ball game. The game-time temperature was 78 degrees, and the game was played under partly sunny skies. The Jays shut out the Yankees 5-0.

At the top of the first, Deivi Garcia, who had an ERA of 1.64 in his last four starts, took the Yankees’ mound. Semien struck out on five pitches. Grichuk flew out to center, and Bichette homered over Aaron Judge’s head at the wall. Hernandez walked, Guerrero Jr. struck out, but the Jay’s picked up a run. At the bottom, Thornton stuck out DJ LeMahieu. Aaron Judge cracked a long single to center. Aaron Hicks lined out to center, and Giancarlo Stanton singled with Judge going to third, but Gleyber Torres flew out to end the inning. Jays 1 Yankees 0.

At the top of the second, Tellez singled off Garcia. Davis ripped on to the left for a single, moving Tellez to second. McGuire popped out to Judge. Valera popped out to Hicks. Semien singled driving in Tellez in for another Jay’s run. Crichuk ground out to end the half. Garcia was definitely having command problems, seldom hitting what Sanchez was calling for; he was continually high. At the bottom, Jay Bruce was out swinging. Gio Urshela flew out to the far-right. Gary Sanchez got a long single to right. Brett Gardner, with one on, lined out to second and a quick inning for Thornton. Jays 2 Yankees 0.

Deivi out for a third inning; his first pitch was a passed ball by Sanchez. Bichette singled just past LeMahieu. Hernandez homered driving in Bichette. Guerrero Jr. singled. Tellez ground out, and Davis hit into a double play to allow Garcia, while still struggling mightily, to get out of the inning, giving up just two runs. At the bottom, LeMahieu ground out to short. Aaron Judge struck out, and Hicks, who has a great eye, walked. Stanton was out at first when Thornton covered.Â  Jays 4 Yankees 0.

Garcia continued to get his work in allowing a leadoff walk to McGuire, and the Yankees had seen enough, pulling Garcia out of the game in favor ofÂ  Luis Cessa. Cessa got Valera to line out, Semien to strike out swinging, and Crichuk to line out to third, a quick 1-2-3 inning for Cessa. Gleyber Torres flew out to second, giving the new Jay’s pitcher Ricardson a quick out. Bruce struck out. Urshela ground out to the hot corner. Jays 4 Yankees 0.

Bo Bichette got his second home run of the game leading off the fifth inning. Warmoth struck out. Guerrero Jr. lined out to Gio. Tellez struck out, ending four and a half. Gary Sachez singled down the left-field line. Gardner had a hard-hit single to left. Judge struck out swinging to end the inning.

Lucas Luetge on the mound for the sixth allowed Davis to walk. McGuire lined out. Davis tried to steal but got in a rundown that DJ won. Valera flew out to Hicks. Aaron Hicks walked again to lead off the bottom of the sixth. Stanton struck out, and Gleyber Torres lined to Lopez, who made an excellent rolling-over catch. Thairo Estrada struck out to end the inning. Jays 5 Yankees 0.

Lopez lined out at the top of the seventh against Luetge. Crichuk struck out, and Addison Russ replaced Luetge; Russ lined out Groshans to end the half. A.J. Cole faced Urshela and struck him out. Sanchez had back-to-back strikeouts. Gardner doubled to far-right on the 10th pitch at-bat.Â  Chris Gittens struck out to end the quick seventh inning. Jays 5 Yankees 0.

Kyle Barraclough on the mound for the New York Yankees in the eighth. Warmoth struck out, Martinez struck out looking. Tellez lined out for a quick 1-2-3 inning for Barraclough. At the bottom, Brito lined out, Florial popped out, and Gary Stanton struck out for a very fast eight for both pitchers.

At the top of the ninth, New York Yankee’s prospect Alberto Abreu was on the mound for the Yankees, he flew out Cullen, lined out Adams, and Urena struck out. During the last three innings, Yankee pitching mowed through Jay’s hitters. With last licks for the Yankees, Amburgey walked and took second on a wild pitch. Estrada ground out to short. Hoy JunÂ  Park struck out swinging, and Max McDowell was hit by a pitch, taking first. Oswald Peraza struck out to end the game and give the 5-0 shutout to the Toronto Blue Jays.

The winning pitcher was Trent Thornton and the loser Deivi Garcia for his second loss of the spring. Game time 2 hours 52 minutes.