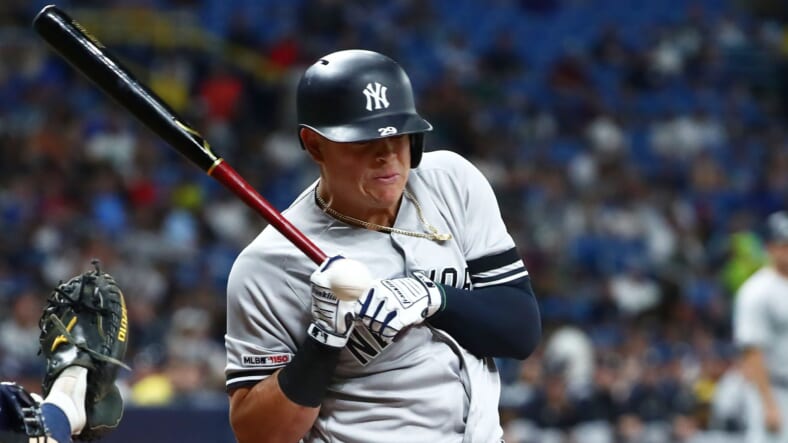 Tonight the New York Yankees hoped to turn around their season while meeting the Atlanta Braves in a short two-game series. The Yankees have gotten off to a languid start going 5-10 with some pretty sloppy play in the last few games. They were coming off a sweep by the Tampa Bay Rays. Tonight, Jameson Taillon was hoping for a rebound facing the Braves. Charlie Morton, a pitcher, the Yankees, were all too familiar with. He pitched for both the Houston Astros and the Tampa Bay Rays most recently, but now he is an Atlanta Brave.Â  The Yankees won the game 3-1.

Taillon took the mound at the top of the first and faced Ehire Adrianza, who struck out. Freddie Freeman singled off Taillon. Marcell Ozuna gound out to Torres. d’Arnaud flew out for a quick inning for Taillon. DJ LeMahieu led off the bottom, grounding out to first. Aaron Judge had a long fly out to far left for the second out. Brett Gardner struck out for a dominant half for Morton. No score.

Ozzie Albies led of the second against Taillon and flew out to Tauchman. Pedro Sandoval struck out. Dansby Swanson ground out for Taillon’s 1-2-3 innings. At the bottom, Giancarlo Stanton struck out. Gleyber Torres ground out. Mike Ford was up for his first time in the major league season and flew out on the first pitch thrown. No score.

Austin Riley led off the third inning by flying out. Guillermo Heredia doubled to the left-field wall. Andrianza doubled, and Heredia scored for the Braves early one-run lead. Freeman went down looking for out number two. Ozuna struck out, but the Braves picked up a run. At the bottom, Gary Sanchez ground out to third. Gio Urshela doubled for the first hit by the Yankees. Mike Tauchman had a sac fly with Urshela going to third base. LeMahieu struck out swinging, leaving one on base. Braves 1 Yankees 0.

d’Arnaud led off the fourth by flying out. Albies walked. Sandoval singled, making two on and no outs for Taillon. Swanson drove into a double play getting Taillon out of trouble. Judge led off the bottom by walking off Morton. Brett Gardner flew out to Ozuna in left. Stanton walked for two on and one out with Torres up; he reached on a fielder’s choice. Stanton went to third base. Mike Ford went down looking as the Yankees failed to tie up the game.

At the top of the fifth, Austin Riley tapped back to Taillon for out number one. Heredia flew out to Judge for the second out. Adrianza struck out for a quick inning for Taillon. Sanchez led off the bottom by flying out to the right-field foul territory. Urshela then homered to tie up the game at one apiece. Tauchman ground out. LeMahieu got a slow roller single. Judge ground out to short, but the Yankees tied up the fame in the fifth. Yankees 1 Braves 1.

Freddie Freeman led off against Lucas Luetge, who replaced Trillion, who had a good start allowing just one run in five innings. Freeman popped out behind the plate to Sanchez. Ozuna flew out to Judge in right. d’Arnaud walked. Albies ground out to short to end the half. Brett Gardner at the bottom of the frame stuck out on 10 pitches running Morton’s pitch count up. Stanton struck out as the Yankee fans booed from the stands. Torres ground out to short, and the score remained tied at 1 apiece.

Sandoval led off the seventh inning by walking. Swanson faced Chad Green replacing Luetge. Green coming into the game, had an unfortunate 0-2 record but an unbelievable 0.93 ERA. Swanton struck out. Riley singled, moving Sandoval to second. Sandoval, one of the slowest runners, was replaced by Kazmar, who hasn’t played in the majors for 12 years.Â  Heredia singled on a show chopper to third, loading the bases for Green. Adrianza struck out for the second out. That was it for Green, replaced by Justin Wilson. With the bases loaded and two outs, Freeman hit sharply out to LeMahieu, leaving the bases loaded with Braves. At the bottom, Ford led off, lining out to the first baseman. Sanchez chopped to third for the second out. Urshela, with two hits in the game, flew out to Freeman for an over-the-shoulder catch and final out of the inning. The game tied at 1.

At the top of the eighth, with a new pitcher, Jonathan Loaisiga on the mound hit Ozuna, advancing him to first base. d’Arnaud hit into a double play to Torres for two outs. Albies struck out. At the bottom of the eighth, Aaron Hicks pinch hit for Mike Tauchman and walked. LeMahieu single left of short and advanced Hicks to second base. Judge singled, loading the bases with no outs. Clint Frazier pinch-hitting for Brett Gardner with the bases loaded with Yankees. A strange move for manager Aaron Boone as Frazier was 0-66 without an RBI. Frazier did the job benignly as a wild pitch allowed Hicks to score. However, Frazier popped out into the infield. Stanton was intentionally walked, bringing up Gleyber Torre. Torres flew out to center. Mike Ford, with the bases, still loaded, and two outs, walked in a run with DJ scoring. Sanchez popped out to left, but the Yankee rallied to take the lead. Yankees 3 Braves 1.

With last licks on the line for the Atlanta Braves, New York Yankee closer Aroldis Chapman took to the mound to close it out for the Yankees. In for Kazmer, Johan Camargo struck out on a breaking ball. Swanson struck out swinging on a 100 mph Chapman pitch. Riley walked. Heredia flew out to Mike Ford in foul territory to end the game and break the Yankees’ five-game losing streak.

Final score New York Yankees 3 Atlanta Braves 1. The winning pitcher was Jonathan Loaisiga, the loser was Tyler Matzek, and the save went to Aroldis Chapman. Gio Urshela homered and doubled in the game.