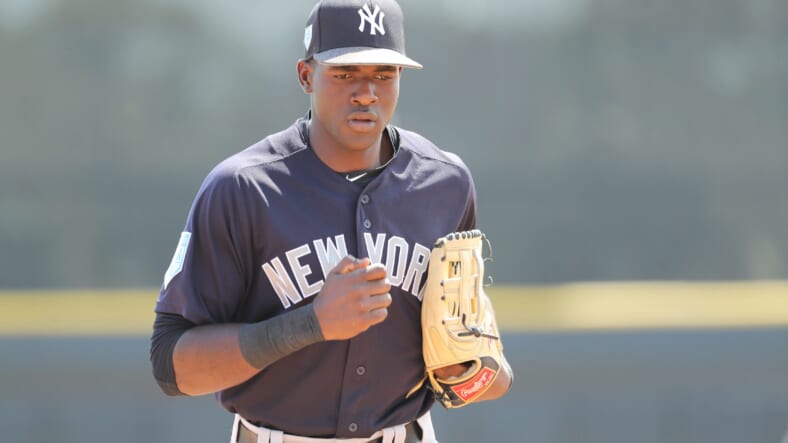 A few years ago, the New York Yankees envisioned Estevan Florial as their star center fielder of the future. Florial had incredible speed, above-average power, and a very good arm from center. He had/has all the makeups of an all-star centerfielder. Many thought he would be on the fast track to the majors during his time in the minors. When the Yankees needed starting pitching over the last few years, Florial was often a prospect that many teams would ask for. However, New York never showed any interest in dealing with him. Brian Cashman has believed that Estevan Florial would live up to the hype. However, that has yet to happen.

Florial does in fact have all the tools, but he has had a lot of bad luck when it comes to injuries over the last few years. He’s broken bones in his wrist the last couple of years which has hindered his ability to play. Florial became one of the top prospects in the New York Yankees system after an incredible 2017 where he hit .298 and stole 23 bases. Florial also showed off his great defensive ability in 2017. The one big drawback to Florial in 2017 was pitch recognition. In 110 games, Florial struck out 148 times. I will say that those struggles are nothing out of the ordinary by a guy who is still cutting his teeth in the professional ranks. Many thought that Florial would be able to iron out those issues over the next couple of years. The problem is that Florial has had wrist issues that have caused him to miss significant chunks of the last couple of seasons. Florial played 84 games in 2018 then played 74 games in 2019. Last year was a very difficult year for Florial that still saw his strikeout numbers remain high, but his batting average dipped below .240. Florial really never seemed like he could get his timing right after the injury to his wrist. The last few years have been very frustrating for Estevan Florial, but maybe 2020 could be the time to turn the corner.

The 2020 season is going to be delayed to the COVID-19 breakout, but once the season starts, Florial should be a guy that all fans are looking at. He’s looking to bounce back and stay healthy after the last two rough seasons. Florial still has excellent speed and good pop for a centerfielder. What I’m looking for this year is his pitch recognition. I want to see if Florial is able to get those strikeout numbers down. The problem for Florial being a high strikeout guy, is he doesn’t counter those strikeouts with huge power like Aaron Judge or Giancarlo Stanton. Florial has good power, but it’s nothing that is elite. If he can get the batting average back up, cut down on his strikeouts, and stay healthy, Florial has the talent to move through the system very quickly. Florial was considered the center fielder of the future for the Yankees just last year. That is no longer the case with the kid from Mars taking over that distinction. Florial can play with a chip on his shoulder this year, and I believe he can bounce back to prove that he is still one of the brightest prospects in the New York Yankees farm system.