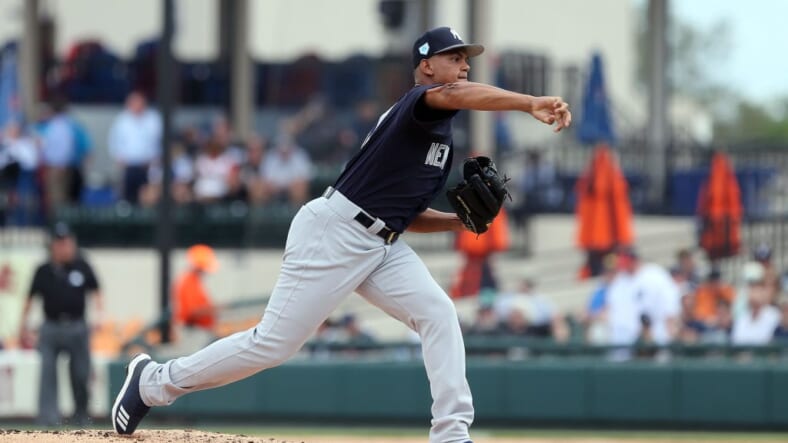 LAKELAND, FL - FEBRUARY 27: Albert Abreu (87) of the Tigers delivers a pitch to the plate during the spring training game between the New York Yankees and the Detroit Tigers on February 27, 2017 at Joker Marchant Stadium in Lakeland, Florida. (Photo by Cliff Welch/Icon Sportswire via Getty Images)

One of the top New York Yankees pitching prospects has seen his stock drop since last year. Before last season began, many thought that Albert Abreu would be one of the Yankees prospects that would be pushing his way towards the majors. When Abreu is on and healthy, he possesses three above-average pitches that would all play well at the Major League level. He has a fastball that can top out in the triple digits, he has a knee-buckling curveball, and he possesses a change-up that really keeps batters off balance. There’s a reason that the Yankees were really excited when they acquired Abreu from Houston in the Brian McCann trade. However, consistency and health have been big issues for Abreu.

For Abreu, the biggest problem has been his ability to stay on the mound. Since the 2016 season, Abreu has never pitched more than 100 innings in a season. Last year, he came close with 96.2 innings, but a nagging bicep injury kept him from reaching the 100 innings mark. Before the bicep it was his shoulder and his elbow that have given Abreu issues. 222.2 innings in three seasons is not what the New York Yankees have wanted to see from one of their top prospects. Another problem Abreu has had is with his consistency. With missing so much time, Abreu at times appears to be pressing on the mound. Combine that with his arm delivery that causes control issues, and Abreu has really struggled at times. In 2019 which saw Abreu spend his entire season with AA Trenton, Abreu went 5-8 with a 4.28 ERA but with an alarming WHIP of 1.614. The walks and hits were both high and the strikeout numbers didn’t counter them to the point that you’d want to see.

Whenever we kick off the 2020 season, I want to see Albert Abreu really pitch with conviction. In watching him a few of times over the last couple of seasons, he appears to be throwing more than he seems to be pitching. The extra time that players are given could be a blessing in disguise for a guy like Albert Abreu. He can spend more time focusing on his mechanics and sharpening a few things up. Abreu could be in for a really good second half of the season. Many think Abreu could crack the MLB roster before the seasons over pitching out of the bullpen. If Abreu does transition to a reliever to fill a need for the Yankees, he has plenty in his pitching repertoire to be a dominant reliever out of the pen. As stated above, his upper 90’s fastball mixes extremely well with his off-speed pitches. I’m not ready to give up on Albert Abreu, and he is definitely a prospect to keep your eyes on in 2020.