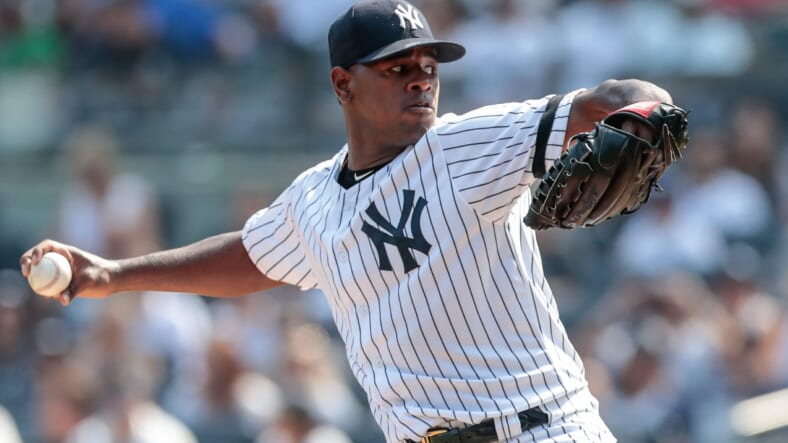 The New York Yankeesâ€™ kryptonite was their starting pitching rotation during the 2020 season. With injuries once again hurting their chances of continuity and success, general manager Brian Cashman will have to address the unit once again this upcoming off-season. While the bullpen was also tumultuous, after the injury to Tommy Kahnle, both units will have to be bolstered.

The Yankees had plenty of talent in their starting rotation, but James Paxton, JA Happ, and Masahiro Tanaka are all set to hit free agency. Reports have indicated that Tanaka could return to Japan, and Paxtonâ€™s inability to stay healthy remains an issue. Happ, who fell short of a $17 million vesting option for 2021, will undoubtedly hit the market and take his talents elsewhere.

That leaves the Yankees down three significant starters, leaving Gerrit Cole, Jordan Montgomery, and Deivi Garcia as the only three healthy options from 2020.

However, they will re-gaining Luis Severino and Domingo German. Both pitchers have the quality to be high profile players for any given team, but Tommy John surgery for Severino and a year without baseball for German will undoubtedly set them back. The Yankees will have to go into 2021, expecting the worst.

How Cashman operates this off-season regarding the starting pitching rotation should be interesting. The Yankees desperately need a number two to pair with Cole, and their back-end starters have been problematic the past few years. Severino hasnâ€™t been reliable due to injury, but the rise of Garcia should prove to be beneficial.

This would be an ideal starting rotation for the New York Yankees, as they would add one of the best arms from 2020 in Trevor Bauer, and also gain Severino back as their third option. Bauer finished the campaign with a 1.73 ERA, recording two shutouts and nine home runs.

After a tough 2019, spending time with both the Cleveland Indians and Cincinnati Reds, he backed up his journeyman performance with a Cy Young caliber season. With Tanaka and Happ coming off the books, the Yankees will be saving $40 million, equalling more than enough to sign a player like Bauer. The only issue, Gerrit and Trevor have a troubled past.

â€I have no problem with Gerrit. We had a rocky relationship in college, because he told me that I had no future in baseball and he insulted my work ethic as a freshman. I donâ€™t take kindly to those couple things, so we had our issues,” Bauer said in an interview back in 2018.

Bauer suggests that the feud is long over, but competitors can often hold onto old grudges. In this scenario, winning a World Series might cure their disgruntled relationship.

As for the return of Paxton, his injury will likely lower his salary cap hit for next season. Retaining him for another two years could make sense, and on the team-friendly deal, keeping him around is beneficial. When on his game, Paxton is a fantastic lefty pitcher and having some diversity in the rotation is always a positive.

What do you think of this starting rotation? Comment below!