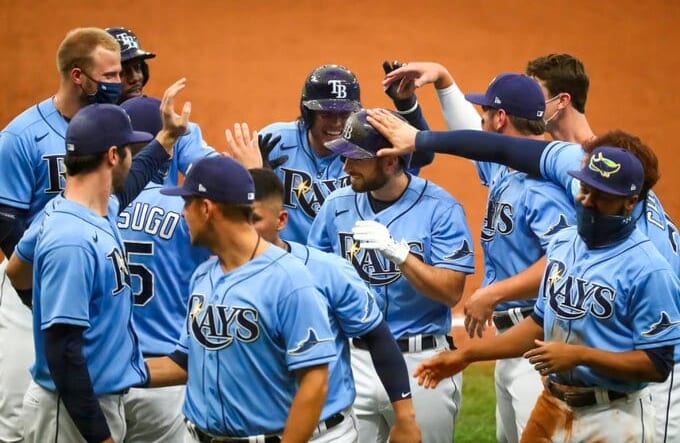 For the New York Yankees and the Tampa Bay Rays, the last several years have been born quite a rivalry that the whole baseball world has observed.Â  And that rivalry has blossomed into two teams that, plain and simply, just don’t like each other. And now the teams find themselves about to face each other in the American League Divisional Series at the neutral Petco Park in San Diego, California.Â  They will not only face each other in the five-game matchup, but they are also sleeping together at a Carlsbad, California ocean resort. Talk about drama!

The Tampa Bay Rays, born the Devil Rays, burst on the baseball scene as an expansion team in 1998. For there first ten years, the New York Yankees pretty much ignored their southern counterpart. They did, however, hate playing at the dank astroturfed Tropicana field. In 2008, the Yankees hosted the last All-Star Game at the old Yankee Stadium, and Yankees had a new manager, Joe Girardi. The Yankees hoped to win their 28th World Championship. The Yankees won 89 games that season but came in third in the division. Then it happened, the energetic mini payroll team of the Rays won the division. From that day on, the Yankees looked at the Rays as rivals.

As the years progressed, the rivalry increased, as did the tension when the teams played together. Both teams resented each other for aggressive play. Often accusing each other of purposely hitting each other’s hitters, and sliding into a bases to hard. All of this caused increased chirping from both dugouts.Â  The tensions between the teams reached its highest point on September 27, 2018. After a back-and-forth of hitting batters, when CC Sabathia was ejected for throwing at Jesus Sucre. Sabathia was furious, and let the Rays’ dugout know it by yelling directly at them.

The back and forth chirping continued in 2019.Â  In 2020 the Rays bested the Yankees for the Division win.Â  Also, the Rays won 8 of the ten times the team faced each other in the shortened season.Â  The teams faced more drama on September 1, when New York Yankee closer Aroldis Chapman nearly hit Mike Brosseau in the head. Both teams burst out of the dugouts, although there were no punches thrown, both teams shouted at each other on the field.Â  Both managers and Chapman were thrown out of the game. It should be mentioned that both teams have hit batters earlier in the series and the Yankees were tired of the Rays pitchers throwing up and in to their batters.

The entired incident boiled over when, after the game the Rays manager overreacted by claiming the Chapman ball was on purpose, and could have killed his player.

“Somebody’s got to be accountable. And the last thing I’ll say on it is, I got a whole damn stable full of guys that throw 98 miles an hour. Period.â€

The threat was made real when the team had t-shirts made, emblazened with the phrase. And now these to teams will play a five game series to determine who will go on to the American League Championship series, and they will do it while living together ast the same resort.Â  The last time these teams faced off was on Sept. 2 at Yankee Stadium, while the ALDS will be played at a neutral-site at Petco Park in San Diego, preventing any home field advantage for either team. Ahead of workouts, the Rays Kevin Keirmaier didn’t mince his words.

“They don’t like us, we don’t like them, and it’s going to continue to stay that way,’

The New York Yankee, Brett Gardner was asked how he felt staying in the same hotel with the Rays.

â€œListen, the feeling is probably mutual. The last several years a lot of back and forth and they got the best of us this year. Arguably the best team in baseball and had a really good season. Obviously, ran away with the division and I feel it is up to us to come out and play better against these guys.â€™â€™

â€œObviously some drama between the two teams during the course of the season, but for me, for our group, the focus is simply on winning each and each and every day and trying to find a way to beat these guys in a five-game series and move onto the ALCS,â€™â€™ Gardner said. â€œJust put all of our energy and focus into that and go out and play the way we did against Cleveland and not worry about the things that happened in the past.â€™â€™

When asked about what’s it’s like meeting in the hallways, or crossing paths in the lobby, he added:

â€œI saw a few [on Friday night and Saturday morning]. Said, â€˜Hey,â€™ and kept walking. Obviously, itâ€™s not ideal, but it is the cards we have been dealt and I feel we got a group of guys who are very professional,â€™â€™ Gardner said before the Yankees worked out at Petco Park on Saturday. â€œIt may not be ideal, but it is a big resort and we got a lot of space and so far it has been good.â€™â€™

With the tensions between these teams, and the stakes so high, one has to wonder what will happen in the series if a batter gets unintentionally hit by an opposing pitcher.Â  You have to remember that Rays manager Kevin Cash all but promised to get back at the Yankees.Â  For fans of both teams the series will be must watch tv.