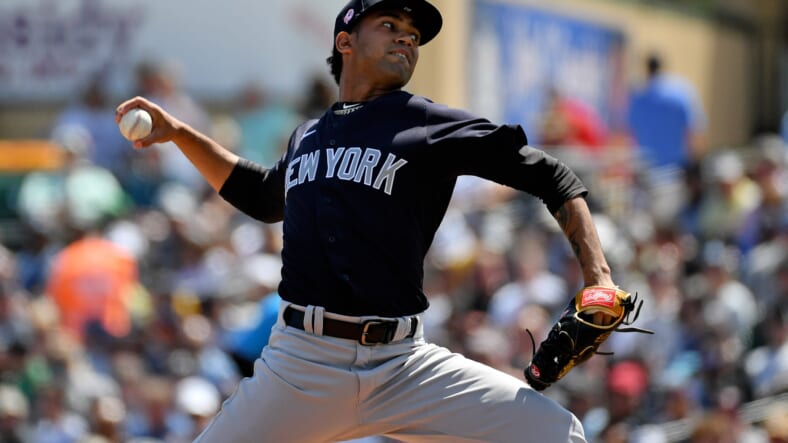 Tonight when the New York Yankees start a 4 game set with the Baltimore Orioles at Orioles Stadium at Camden Yards, Deivi Garcia will make his first start of the season. Garcia made his major league debut last season. The Yankees won the first start of his career. That game produced one of the most memorable quotes of the year. â€œIâ€™m going to play catch with my son,â€ that was the phrase shouted back at the dugout when veteran New York Yankees catcher Erik Kratz left the dugout for home plate to get ready to catch Deivi Garcia in his major league debut.Â  The phrase was an obvious remark referencing the two playersâ€™ age difference.Â  Kratz was 40 years old, and the young pitching sensation was just 21.

Today, still at 21 (he will turn 22 next month), he will make his seventh start of his young career. Garcia did not make the Opening Day starting roster. He has been at the alternate site working on command issues with his slider. Garcia made his major league debut last season and pitched in six games. He ended the season with the Yankees winning 4 of his six starts and an ERA of 4.98. Today he will hope to join the rotation permanently. Being part of the traveling squad that travels with the team on road trips, he is also set up to start game two of the following Detroit series. Let’s take a look at how he got to this point.

Deivi GarcÃ­a was born on May 9, 1999.Â  He grew up in Bonao, the Dominican Republic. He has two older brothers. His father, a youth baseball coach, also coached GarcÃ­a as a youngster. His mother, a doctor, set aside her career to raise their family.Â  The Dominican Republic has a bevy of young boys interested in baseball. Deivi (pronounced Davey) developed that same interest as a young boy and played baseball with friends in the sandlots around his home in Bonao. Influenced by his father, he developed a strong arm for pitching, although he played in the infield and outfield.

At the age of just sixteen, he made his way to the beach town of Boca Chica in the DR.Â  Boca Chica is the home of several baseball training facilities, including the New York Yankees baseball Academy. One day the Yankee’s top international scout Donny Rowland stood in the batting cage in the hot DR heat.Â  On the mound was Deivi Garcia.Â  Rowland watched and watched five pitches from a right-hander who would become one of the best pitching prospects in baseball, despite how hard it might have been to envision at the time.Â  The reason it was hard to envision is the young prospect was just 5â€² 9â€³ which is really small for a pitcher.Â  He also had a slight build, more like a welterweight boxer at only 150 pounds. But Rowland was amazed by the young manâ€™s knee-buckling curveballs. Rowland immediately said get that guy off the mound, weâ€™re going to sign him. On a side note, Rowland also discovered Jasson Dominguez that is currently being developed at Boca Chica.

GarcÃ­a signed with the New York Yankees in July of 2015 for a $200k signing bonus. Though he previously played baseball as an infielder and outfielder, the Yankees were determined to have him become a Yankee pitcher due to his curveball and arm strength.Â Â  For the next two years, trainers worked with Garcia at the Boca Chica facility. In 2018, GarcÃ­a pitched for the Charleston River Dogs and the Tampa Tarpons.Â  He made his final start of 2018 with the Trenton Thunder AA Yankee minor league affiliate as he continued to rocket through the minors.

GarcÃ­a returned to Tampa in 2019 and was promoted to Trenton after making four starts. In July, he was selected to play in the All-Star Futures Game. After the game, he was promoted to AAA Scranton Wilkes/Baree RailRiders. 2019 was not Garciaâ€™s best season as he struggled at times and seemed to tire; nonetheless, he continued to show his abilities.Â  Following the 2019 season, the Yankees added GarcÃ­a to their 40 man roster to protect him from becoming eligible in the Rule 5 draft. GarcÃ­a was named minor league pitcher of the year in the Yankees organization in 2019.

The Yankees sent GarcÃ­a to their alternate training site to begin the 2020 season where he continued to improve.Â  On August 30, 2020, the Yankees were short starting pitchers, due to playing five games in just three days. In the second game of a doubleheader against the New York Mets, Deivi Garcia made his major league debut.Â  An unintimidating figure on the mound, Garcia showed the complete confidence of a much older veteran. He backed that up with a one, two, three first inning.Â  He struck out the side in the third. He ended up his major league debut pitching six innings on 75 pitches, allowing four singles, no earned runs, no walks, and had six strikeouts in a no-decision debut. He and Kratz worked seamlessly together, the two hugged in the dugout.Â  Only after the game did Garcia crack a smile.

Although Garcia is the Yankees number 3 prospect according to MLB Pipeline, he still has to complete with Michael King and Clarke Schmidt to hold down a spot in the New York Yankees pitching rotation. Even with a win today, there is no surety that he will remain with the team, but it certainly will put him in contention if one of the starters fails or is injured.