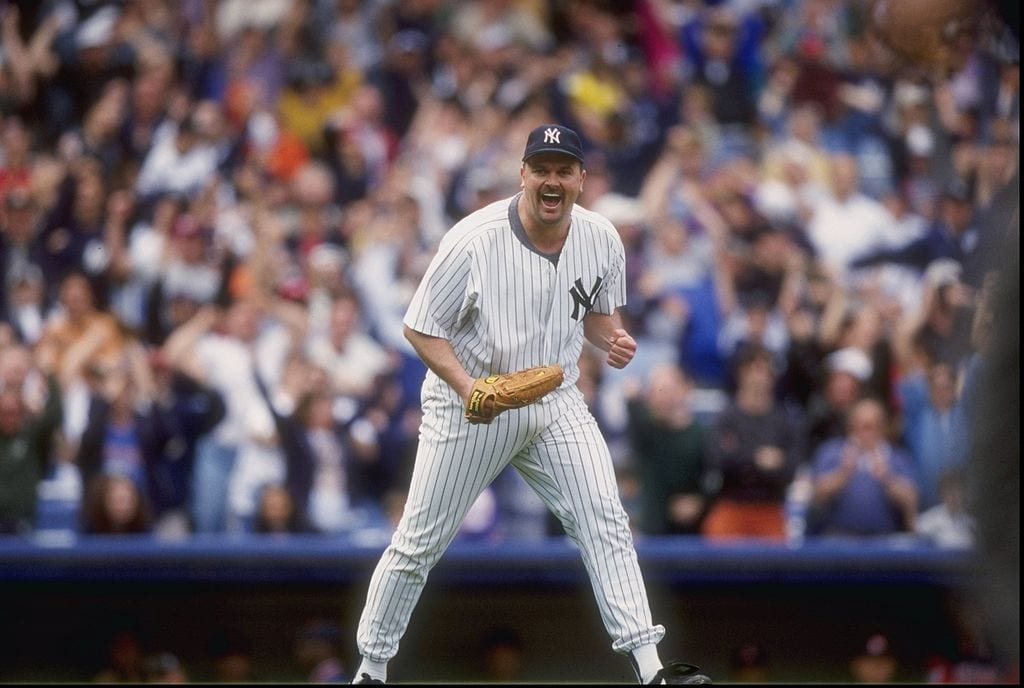 Of New York Yankees players, none may have been as irreverent, wild, and loved than David Wells.Â  Wells was cut from a different cloth than most Yankee players.Â  He didn’t care who he threatened, who he offended, or what the Yankee brass thought of him.Â  He only wanted to be the best pitcher he could be, and he did that, even pitching one of only three perfect games in the Yankee’s 117-year history in 1998.

David Lee Wells was born on May 20, 1963, in Torrance, California. To say that he had a somewhat unusual childhood would be a dramatic understatement.Â  Not many kids brought Hell’s Angels to their little league games.Â  David’s mother, Eugenia, was a biker chick who went by the handle “Attitude Annie.”Â  There was nothing average about Eugenia; she had five children from four different men.Â  As a child, David didn’t know who his father was until he met him when he was 22 years old.

Getting back to the Hell’s Angels thing.Â  His mom’s friends, most of them Hell’s Angels would attend young David’s little league games to root him on.Â  The bikers would give Wells a dollar for every strikeout and five dollars if he won the game.Â  At the end of the game, they would often owe him a $100 or more.Â  He never worried about them reneging on him because if they didn’t pay up, he would turn his mom’s boyfriend on them.

His mom’s boyfriend was a guy named Charlie; Charlie treated the young boy like a king.Â  He was never mistreated by Charlie, but at the same time, he could expect to be given a good smack if a life’s lesson was involved.Â  One time the young Wells entered the room with his fists up and immediately got a left hook from Charlie, saying if you put up your fists, you better be prepared to use them.

Wells attended schools in his Point Loma, California neighborhood, and attended Point Loma High School, while there he pitched for the school team and the 1981 and 1982 city championship.Â  During this time, he began to show his irreverence for the rules and authority in general.Â  Once his coach learned that he was planning on walking the bases loaded and then striking out the side, which is precisely what he did.Â  He played basketball and baseball and was good at both.Â  He was a gym rat spending his day that Ocean Beach Rec center and Robb Field.Â  While at Point Loma, the young Wells pitched the first perfect game of his career while being a senior. He got the nickname “Boomer” from this booming personality.

On another occasion, Wells was well on his way to a second perfect game; the first baseman conveyed to Wells that he only needed one more for the feat.Â  You never talk to a pitcher that is pitching a perfect game.Â  The coach heard him and told him if the hitter got a hit he would be thrown off the team.Â  The player did get a hit, and the coach did throw the first baseman off the team.Â  On the following day, Wells convinced all his teammates to boycott practice unless the coach re-instated the player, the coach relented, and the first baseman was back on the team

You can imagine with the excellence Wells demonstrated that he would be noticed and courted by major league scouts. And that he would. his demonstrated ability to pitch in critical ballgames and being chosen for the American Baseball Coaches Association second All-American team may have encouraged the Toronto Blue Jays to pick Wells in the second round of the 1982 amateur draft. Wells vowed that he would never pitch for a team named after a feathered friend.

Fresh out of Point Loma High, Wells signed with the Toronto Blue Jays.Â  Wells was then 18 years old; surprisingly, he would never be a major league starter until he was 30 years old.Â  At first, the Jays sent Wells to Medicine Hat Alberta, Canada, a move Wells was not all happy with. While there, he had moderate success but pitched to an ERA above 5.Â  Over the next years, he would slowly work his way through the minors while continually improving.Â  In 1985 he would hit a bump in the road being the only third American pitcher to require Tommy John surgery.

After the surgery and rehab, Wells would make his major league debut as a reliever for the Jays in 1987.Â  It wasn’t until 1992 that Wells would start the season as a starter.Â  He pitched well and was a factor in the 1992 World Championship when he would earn his first World Series ring. However, he was released by the Jays during spring training in 1993.Â  Blue Jays general manager Gord Ash explained that the team had grown tired of his inconsistency, his temper, his weight, and his fondness for drinking beer â€” lots and lots of beer. â€œWe did everything we could to control him,â€ all to no avail.

Apparently his irreverence and wildness didn’t bother the Detroit Tigers as they signed him to a two-year contract.Â  For the Tigers, he pitched both as a reliever and starter.Â  He started 16 games in 1993 and went 11-9, as a starter, his ERA was 3.96.Â  But after two years, the Tigers had had enough of Wells as well.Â  There was talk of Wells being traded to the New York Yankees, but that deal was nixed by Gene Micheal. During the next two years, he would play with the Cincinnati Red and the Baltimore Orioles.Â  After the 1996 season, Wells became a free agent.

In the spring of 1997, the New York Yankees would sign the 34-year-old Wells.Â  Wells had always admired the Yankees and particularly Babe Ruth.Â  Wells asked for the number 3, which of course, was denied.Â  He eventually took the number 33.Â  He admired Ruth so much that he had purchased for $35k one of Babe Ruth’s caps.Â  One day he showed up on the mound wearing it.Â  After one inning Yankee manager Joe Torre had him remove it as it wasn’t game issued gear.

While with the Yankees Wells antics and heavy beer drinking did not cease, although not always easy, they put up with it as he became one of the best Yankee pitchers.Â  He ended the 1997 season 16-10.Â  During 1998 he went 18-4 and pitched to a 3.49 ERA and came in 3rd in the Cy Young voting.Â  Wells loved pitching in the spotlight of Yankee Stadium, and the New York Yankee fans embraced his wild demeanor and take no prisoners pitching.

May 17, 1998, would change David Well’s life forever and how the history books would remember him.Â  He pitched the second only perfect game in Yankees history when he beat the Minnesota Twins 4-0.Â  Wells would later say that he pitched his perfect game while suffering from a severe hang-over.Â  The first Yankee perfect game was also the only perfect game to be pitched in a World Series by Don Larsen.Â  The last and only third perfect game was pitched by David Cone in 1999.

On September 1, 1998, Wells almost repeated his perfect game.Â  It was the seventh inning, and he had not allowed a hit or walked a batter.Â  With two outs in the seventh inning, Oakland Athletics Jason Giambi singled off him. After the season Yankees owner, George M. Steinbrenner wanted Roger Clemens from the Jays and got him by trading Wells, Homer Bush, and Graeme Loyd to the Jays.Â  During the next two years with the Jays, Wells would go 37-15 showing that he hadn’t lost a beat.

The Jays would again tire of Well’s beer drinking, and he would be released to the Chicago White Sox.Â  The Sox got the worst of that deal as Wells would have the worse season of his major league career as he struggled with back problems during the whole season.

Again Wells would find himself with the New York Yankees for a second stint with the team and players he loved.Â  2002 showed Wells had lost some velocity with his fastball but still exhibited an excellent curveball and control.Â  He posted a 19-7 record for the Yankees.Â  Between the 2002 and 2003 season, Wells published his autobiography “Perfect I’m Not: Boomer on Beer, Brawls, Backaches, and Baseball.Â  The book exposed the real David Wells to Yankee fans, and the Yankees front office did not appreciate his efforts and fined him $100k for disparaging comments he made in the book.

During the 2003 New York Yankees season, Wells earned his 200th career win while pitching to a 15-7 record.Â  But during the 2003 World Series, Wells was criticized by Yankee fans for leaving game 5 with a sore back in the first inning.Â  Manager Joe Torre had to use the bullpen to finish the game, and the series was won by the Florida Marlins.

David Wells, not being resigned by the New York Yankees, would become a free agent once again. He would go on to pitch a year with the San Diego Padres, a year and a half with the Boston Red Sox, in a second stint, another year and a half back with the Padres.Â  He would end his playing days in 2007 with the Los Angeles Dodgers.

During 2006 at age 42 Wells was starting to feel as though his age was catching up to him after all most pitchers would be long since retired.Â  As he aged, he became less wild, less irreverent,Â  and easier to get along with. In his career, he was 239-157, with an ERA of 4.13.Â  That high of an ERA is probably the sole reason Wells my never be in the Baseball Hall of Fame. Highlights of his career include a 20 game winning season in 2000, 231 innings pitched in 1999, he came in 3rd twice in the Cy Young voting and was an All-Star only three times.

Wells earned over $58 million in his career.Â  He lives comfortably with his wife Nina and their two sons, Brendan and Lars.Â  He is the coach of his son’s baseball team in the stadium that bears his name.Â  Since retiring he has been a broadcaster for MLB, TBS, and Fox Sports.Â  As of this year (2019), he has become a color commentator for the YES Network.Â  David regularly attends the Old Timer’s Day celebration at Yankee Stadium, where he received applause when introduced as if he was still pitching today.

David is an avid golfer; he won $50,000 last year for Rady Childrenâ€™s Hospital in the Ace Hardware Celebrity Golf Shootout. Over the years, the Wells family has raised funds for research into diabetes, a disease that affected Davidâ€™s mother and brother, and now, David himself. â€œIf you can give back,â€ says the man who blanked the Minnesota Twins in his 1998 perfect game, â€œitâ€™s a home run.â€

Although all sources say that he is still married to his wife Nina, Wells posted a strange Tweet on Twitter in 2017 saying:Â  “My wife left me for my best friend, I am going to miss him lol. ”

EmpireSportsMedia.com’s Columnist William Parlee is a member of the Society for American Baseball Research