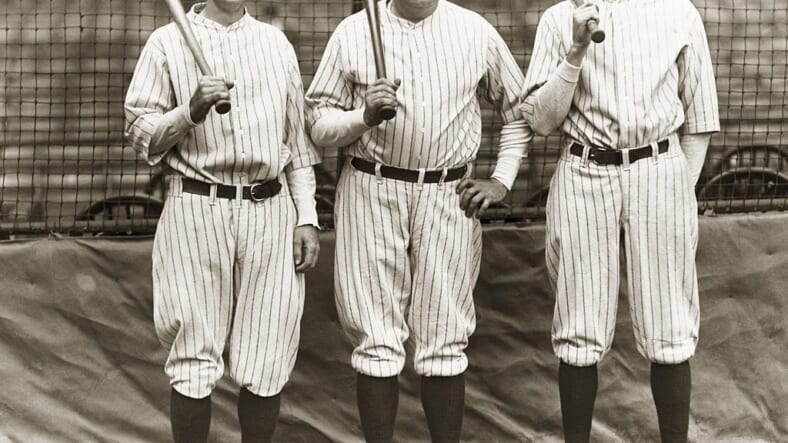 (Original Caption) After making a runaway race of it all season, the Yankees won the American League pennant. They took the opening series of the year from the Athletics, of Philadelphia, and held the lead until the end; their victory was due mainly to the heavy hitting of "Babe" Ruth, Lou Gehrig; Tony Lazzeri and other members of the team; Miller Huggins is the manager. Photo shows Combs, centerfielder; Ruth, left fielder and Meusel, right fielder. (Photo by George Rinhart/Corbis via Getty Images)

The New York Yankees have an illustrious 119-year history, starting as the Baltimore Orioles.Â  The Yankees have one of the most successful franchises in all sports. They have 40 American League championships and 27 World Series to their name. Not a day goes by that something important happens; here is a look at this week in Yankee history. I picked this week as it normally was Opening Week, with lots of news:

1913 – In an exhibition game at Ebbets Field, The Yankees lost to the Brooklyn Dodgers 3-2. Player Casey Stengel hit an inside-the-park home run, the first home run ever at Ebbets Field.

1925 – Babe Ruth suffers a collapse at an Ashville, North Carolina train station. The supposed cause was a hot dog and soda binge. He required surgery and missed seven weeks of play.

1973 – Ron Blomberg becomes the first designated hitter. The Yankees become the last team in baseball to do away with fannel uniforms in favor of polyester.

1974 – The Yankees start the renovation of Yankee Stadium and play for the next two years at Shea Stadium until the renovations are complete.

1976 – The Milwaukee team lost to the Yankees 9-7 in a heartbreaking loss for the mid-west team. Don Money blasted a homer into the stands, but Yankee manager raced to the field to claim that a time out had been called. The umpires finally admitted that time had indeed been called, causing the Brewers to lose the game.

1994 – The New York Yankees have their largest ever attendance at Yankee Stadium. 56,706 attended Opening Day.

2003 – On Opening Day at Yankee Stadium, it was 35 degrees at game time. Newly acquired, Hideki Matsui got his first hit at the Stadium, a massive Grand Slam into the right-field bleachers. There were as many Japanese reporters at the Stadium as American ones.

2009 – The New Yankee Stadium opens one block north of the old Stadium that “Ruth built” in the Bronx borough of New York City. The new stadium, the second-largest in MLB was funded with $1.6 billion of taxpayer money and $1 billion of private investment. The old Stadium was razed and is now a public park called Heritage Field.

2010 – Forbes Magazine reported that the Yankee franchise was worth approximately $1.6 billion, more than twice any other team. This was one year after the New Yankee Stadium opened on April 2, 2009.

2015 – The New York Yankees play the longest game in franchise history. The date was April 10, 2015, in a game the Yankees lost to the rival Boston Red Sox after 17 innings that took six hours and 49 minutes. It was called by many, the game that never ended.

Many of the facts for this article come from Nationalpastime.com. EmpireSportsMedia.com’s Columnist William Parlee is a member of the Society for American Baseball Research. Follow me on Twitter @parleewilliam.