New York Yankees: Opening Day is just one day of a 162 game season 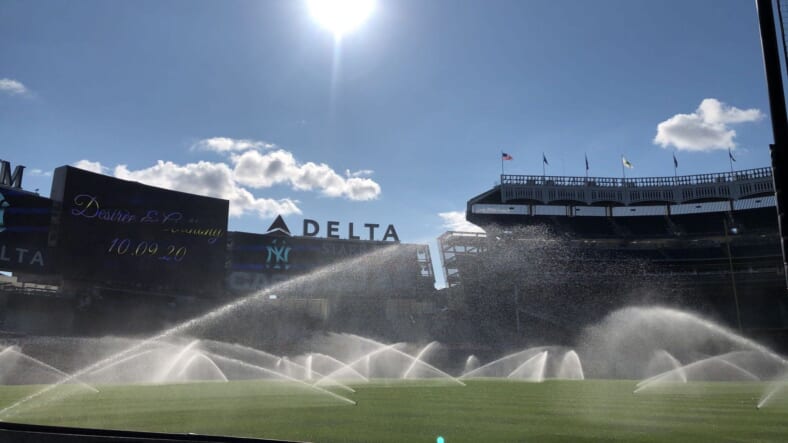 Opening Day is very special to the New York Yankees, especially when it’s at Yankee Stadium in the Bronx. Other than the celebrations, it is a game like any other game during the season. Of course, pitchers and players want to get off to a good start on the season, but it has little to do with how the players or the Yankees will do throughout the season.

The Yankees yesterday faced the Toronto Blue Jays in their opener and lost 3-2 in the tenth inning. It could be that the only reason the Yankees lost was the hold-over rule from the 2020 season that called for a man to be on second base. When the Jays opened the 10th inning, Rowdy Tellez was on second base. Crichuk hit a single, and Tellez scored the winning run. The Yankees still could have lost the game, but at the same time, it could have been a factor.

There have been all kinds of Opening Days at the Stadium, and the weather is always a factor. The weather yesterday rated a B + on the scale. It rained in the morning and cloudy at game time, but the sun showed strong for much of the game. Andy Pettitte pitched in 1996 pitching six-plus innings in the snow in a game the Yankees won. In 2018 Yankee Stadium was found to be blanketed in snow; the Monday start was postponed until Tuesday as Yankee personnel worked feverously to clear the field and stands.

In 1982, Opening Day had to be postponed to Easter Sunday because a blizzard loaded the Stadium will 11 inches of snow. But some Opening Days were spectacular; one that comes to mind was opening Day in 1976; the festivities were enjoyed with bright sunny weather with temperatures near 80 degrees. In that opener, Joe DiMaggio, Mickey Mantle, Whitey Ford, Don Larsen were part of the celebration. Yesterday although it was celebratory, it was greatly toned down from previous years. By the way, in 1976, the Yankees had a comeback victory 11-4 over the twins, but they lost the World Series in four games. In 1982 they lost to the White Sox 6-7, they ended a losing season 79-83. In 1996 Pettitte won the opener 7-3 over the Royals, the Yankees won the World Series over the Braves, and in 2018 when the game was postponed, they won over the Rays 11-4 but lost the division series against the Red Sox.

The New York Yankees have never won 162 games; Mickey Mantle never batted 1.000. The point is that no team or player is going to be perfect. Baseball is a game that you hope your team wins more than it loses, and you always hope to win the World Series, but even the New York Yankees, which is the winningest sports franchise in the world, has lost more than they have won. The Yankees record presently stands at 27-89. For players, they all hope to be errorless and bat .300, but it’s unusual when it happens. If you were correct 30% of the time in academia, you would be considered a miserable failure.

Baseball is a game of failures; the less you fail, the better you are. When you consider one game of a 162, although every game is important, the one game means relatively nothing. Yesterday Gerrit Cole lost his game even though he pitched well. Gary Sanchez, who had a dismal season last year, was the star of the game, walking once, singling, and hitting a 407′ home run, driving in the only runs of the game. Does it mean that Cole will have a 20 game winning season or that Sanchez will hit 50 home runs on the season? No, it doesn’t; it’s just one of 162 games.

If anything can be taken away from yesterday’s game, one is concerning, and one is hopeful. The Yankee bullpen yesterday was great; they didn’t give up an earned run in the game. The concerning thing is that the Yankees’ offense was almost not present. And it is not just yesterday, in the last twelve games of spring training, the Yankees only scored 3.1 runs per game. The Yankees seem to have long stretches where the hitting is cold. You can not win a World Series with 3.1 runs per game or a postseason, for that matter, as demonstrated in the past few years.Â  The Yankees are going to have to solve this; it’s way above my pay grade.

Take wins and losses in stride, it’s going to be a long and exciting 162 game season. One where more than in past years, the Yankees have a better chance of obtaining that elusive 28th World Championship.