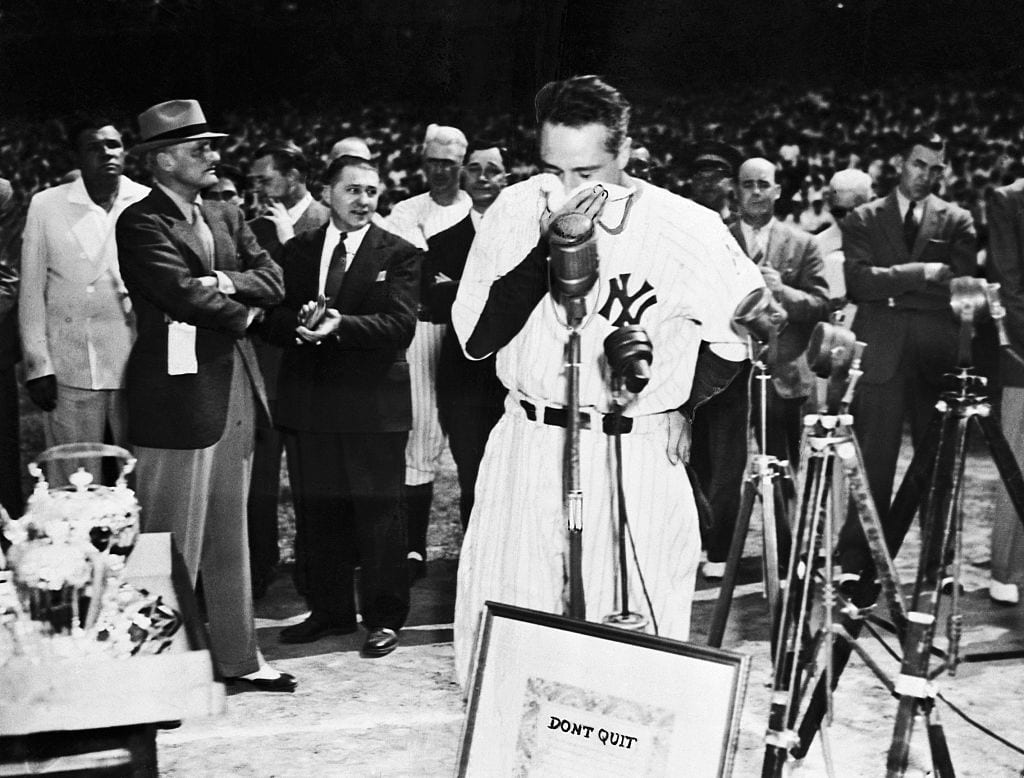 The New York Yankees and all of baseball will celebrate Lou Gehrig Day on June 2nd., as reported by Jeff Passan, an MLB insider and ESPN reporter. He said that a large group of people affected by ALS banded together to convince teams and the leagues to honor Gehrig as they do with Jackie Robinson and Roberto Clemente.

Those fans who do not know who Lou Gehrig is, he was one of the greatest New York Yankee players ever to play the game. His life was cut short by ALS, later to be named Lou Gehrig Disease. ALS (Amyotrophic lateral sclerosis) is a fatal disease; there is no cure. ALS often begins with muscle twitching and weakness in a limb or slurred speech. Eventually, ALS affects control of the muscles needed to move, speak, eat and breathe.

On July 4, 1939, between games of a doubleheader at Yankee Stadium, nearly 42,000 baseball fans sat quietly in the stands waiting for their teamâ€™s first baseman to address the crowd. It was Lou Gehrig Appreciation Day. It should have been a joyous celebration, but it wasn’t. A few weeks earlier, Yankees fans learned that Gehrig was suffering from an incurable disease that would prevent them from seeing him continuing to play.

On that day, Gehrig made one of the saddest and memorable speeches ever made in New York Yankee history. After not seeing Gehrig for several weeks, fans were shocked to see the once very handsome man, gaunt and thin, obviously zapped of his strength. All the dignitaries were there, including the Major of New York. He was showered with gifts from fellow players, the Yankees, and the opposing Washington Senators. Gehrig, a shadow of his former self, was holding back tears, and it looked as if he might not be able to speak on that hot, humid summer day. But somehow, he garnered the strength to stand behind the microphone.

Just like he had done in each of the 2,130 consecutive games he played in his career, the Iron Horse gathered his strength and forged ahead.

“For the past two weeks you have been reading about a bad break. Yet today I consider myself the luckiest man on the face of the earth. I have been in ballparks for seventeen years and have never received anything but kindness and encouragement from you fans.

â€œWhen you look around, wouldnâ€™t you consider it a privilege to associate yourself with such a fine looking men as theyâ€™re standing in uniform in this ballpark today? Sure, I’m lucky. Who wouldn’t consider it an honor to have known Jacob Ruppert? Also, the builder of baseball’s greatest empire, Ed Barrow? To have spent six years with that wonderful little fellow, Miller Huggins? Then to have spent the next nine years with that outstanding leader, that smart student of psychology, the best manager in baseball today, Joe McCarthy? Sure, I’m lucky.

“So I close in saying that I might have been given a bad break, but Iâ€™ve got an awful lot to live for. Thank you.”

In his seventeen years, Lou Gehrig, all with the New York Yankees, became a legend for being one of the best and more durable players that the team had ever seen. He played from 1925 to 1938, taking part in no less than 150 games a season. But in 1939, as the disease started to ravage the once-great man, he played in only eight games, with a career batting average of an unbelievable .340. Early in the 1939 season, while he could still play, he batted only .143 until he could no longer play.

In his career, he was an MVP nominee 10 times, winning the award twice. 1933 marked the first time baseball had an All-Star game. Gehrig was an All-Star every year until his career ended. After Gehrig’s emotional speech, he managed to live almost two years. But on June 2, 1941, the great Lou Gehrig lost his battle with ALS.

Gehrig was enshrined in the Baseball Hall of Fame. On Dec. 7, 1939, the BBWAA (baseball writers) voted unanimously to suspend the waiting period and immediately placed Gehrig in the Baseball Hall of Fame. On June 2nd, the Yankees will be at home at Yankee Stadium playing against the Tampa Bay Rays. They also will celebrate the life of Lou Gehrig, the player, the man, the legend, and yes, the American hero.