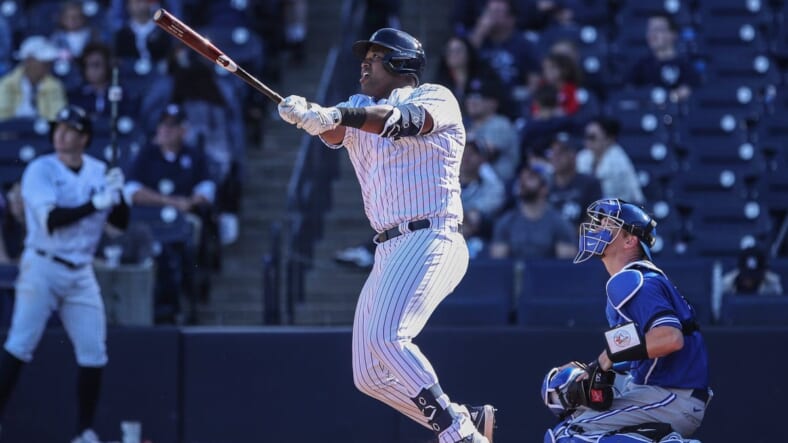 Over the weekend, the New York Yankees‘ first baseman Jay Bruce announced his retirement to take effect after his final game last night. The still relatively young Bruce (34) was obviously emotional in his statement to the fans and the bullpen with his fellow players. Bruce was not in the lineup last night. He first let manager Aaron Boone know about his plans on Friday but announced his retirement Sunday Morning.

“The reason I ultimately chose to do this is because over 13 years of playing pretty much every single day, I set a standard of what I expected out of myself from a performance standpoint,” Bruce said on Sunday afternoon. “I know there are ups and downs and ebbs and flows throughout a season and throughout a career, but ultimately, I just felt like I couldn’t perform at the level that I expected out of myself.”

“Thank you Jay, for your professionalism and leadership in your short time here. We wish you nothing but the best and congrats on an amazing career.” The tweet was followed by a heart.

The bottom line is that although he did have an amazing 14-year career, he did not play well for the Yankees. In a somewhat unfair move, the Yankees put him in the starting lineup as the Yankees’ first baseman after Luke Voit required knee surgery. Bruce was an outfielder by trade, with some experience at first base. As I said, it did not turn out well and led to his decision to retire.

His retirement leaves the Yankees with a question to solve, who do they put at first base until Voit returns in another month or so. They appear ready to leave DJ LeMahieu in the position now that they have Rougned Odor to cover second base. But the Yankees do have other options.

Mike Ford did not have an inspiring spring training, but he hit one home run and batted .259 during 11 games. But at the beginning of the regular season, the Yankees ultimately choose Jay Bruce to man first base. That turned out to be a mistake, so when the Yankees signed Odor, they moved DJ LeMahieu to first. Now that Jay has retired, they still have to find a permanent replacement until Luke Voit returns. Ford is an option; he has had his moments with the Yankees, hitting the longest home run in the past two season and a walk-off win. He also has been a Red Sox killer.

My choice to fill the first base void is Chris Gittens. In spring training, he hit 3 no-doubter home runs and batted .316 in 20 games. That alone should have got him the first base job. In 2019 he drove in 77 runs and got 118 hits with 23 homers batting .281 while with the Trenton Thunder. It seems to me this is a no-brainer that manager Aaron Boone should act upon immediately and allow DJ to go back to second base. Rougned Odor is batting .125. I am sure that Gittens can get better run production than that.