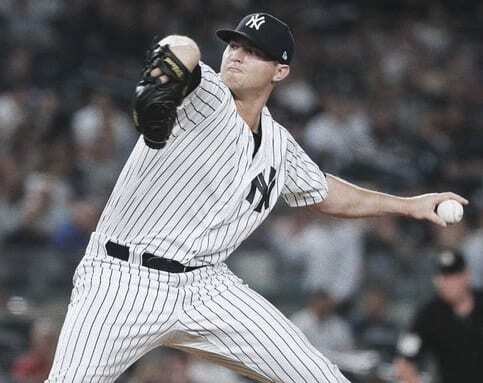 The New York Yankees have a bundle of decisions to make on how to improve the team before the start of the 2021 season. But the clock is ticking on one of those decisions.Â  Depending on when the World Series ends, the Yankees have only three days to decide on the option to keep Zack Britton in pinstripes. If the Yankees don’t exercise his option, Britton has five days to decide if he wants to be a Yankee or wants to hit the free-agent market.

For the most part, Zack Britton was the Yankee’s most reliable reliever in this past season. He appeared in 20 regular-season games, he posted a 1.89 ERA and surrendered zero home runs. That kind of performance nearly guarantees that the Yankees will want to exercise that option. Add to that the ex-Baltimore Orioles closer can close games. When Aroldis Chapman was out with the coronavirus, Britton saved 9 games for the Yankees.

The New York Yankee’s Zack Britton took on a new role with the Yankees, at least at the beginning of the season as Yankee closer Aroldis Chapman tested positive for the coronavirus.Â  Yankee manager Aaron Boone stated that Chapman would not be available to the Yankees for the foreseeable future. That decision led to Britton saving nine games in his absence.

Britton spent 2007 through the 2010 season in the minor leagues of the Orioles organization. When 2011 came around he again found himself in the minor leagues, this time with the Norfolk Tides. But just five days into the season he was called up to the majors to replace the injured Orioleâ€™s pitcher Brian Matusz. Britton finished his rookie campaign, appearing in 28 games (all starts), pitching to a 4.61 ERA, 1.45 WHIP, and an 11-11 record. In the interleague play, he also proved his hitting ability. In eight at-bats, he had five hits, leading all American League pitchers for the 2011 season.

In 2016 he signed another new contract and recorded 33 consecutive saves by August 3, setting an MLB record for most consecutive saves to start a season by a left-handed pitcher. Britton pitched in 69 games, throwing 67 innings while allowing only four earned runs for a 0.54 ERA. This broke the MLB record for the lowest single-season ERA by a pitcher with at least 50 innings pitched.

In 2017 he became just the fifth pitcher in MLB history to convert at least 50 consecutive save opportunities. Unfortunately, 2018 didnâ€™t start well for Zack, he signed his biggest deal with the Orioles, but he was placed on the 60-day disabled list to begin the season, as he recuperated from the ruptured Achilles tendon injury. He recorded his first save of the season on June 23rd.

On July 24, 2018, the Orioles traded Britton to the New York Yankees in exchange for Dillion Tate, Cody Carroll, and Josh Rogers. Britton went on to post a 2.88 ERA in 25 appearances for the Yankees in the 2018 season. His 1.86 ERA from 2016 to 2018 was the lowest in major league baseball of all pitchers with 100 or more innings pitched. Britton thrived in his new role as a late-game reliever. Britton signed a three-year contract with an option for a fourth year with the Yankees on January 11, 2019

Britton would appear in 66 games for 61 innings, often the lefty was used to get just one important out. He finished the season recording three saves and had an excellent ERA of 1.91 and a 3-1 record. In the 2018 and 2019 postseasons for the New York Yankees, he pitched in 12 innings while allowing just four runs. He also fields his position well with a .965 fielding percentage.

The shortened 2020 season for Britton was a good one, he went 1-2 in 20 games with an ERA of just 1.89. With the clock ticking the Yankees need to exercise his option, which will keep Britton under Yankee control for the next two seasons.

Among other decisions, the Yankees have to decide what to do with DJ LeMahieu, Masahiro Tanaka, Brett Garder among others, but none more important then holding on to Zack Britton.

EmpireSportsMedia.comâ€™s Columnist William Parlee is a member of the Society for American Baseball Research. Follow me on Twitter @parleewilliam