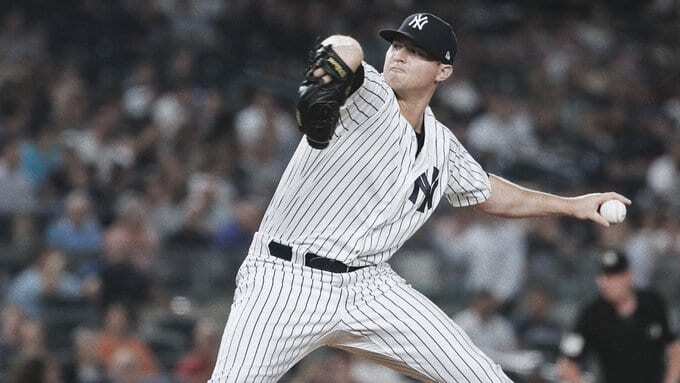 The New York Yankees have many decisions to be made regarding free agents, options, and filling defeciences in a team that has not made the World Series since 2009. One decision made will keep Yankee reliever/closer, Zack Britton, in pinstripes through the 2022 season.

Britton has been one of the most reliable Yankees relievers since he left the Baltimore Orioles. This past season he was just as reliable and also closed eight consecutive games for the Yankees while closer Aroldis Chapman was out with the coronavirus. His contract has an option for the Yankees for the 2021 season.

The orginal deal guaranteed three years, including a club option for a fourth season that can be exercised after Year 2 and, if not exercised, Britton could opt out after that second year. Britton chooses to stay with the Yankees, and the Yankees exercised his option through 2022. Britton will make $13 million this upcoming season and $14 million in the final year of the contract before becoming a free agent again.

After ten years in the Baltimore Orioles organization, in 2017 he became just the fifth pitcher in MLB history to convert at least 50 consecutive save opportunities. Unfortunately, 2018 didnâ€™t start well for Zack, he signed his biggest deal with the Orioles, but he was placed on the 60-day disabled list to begin the season, as he recuperated from the ruptured Achilles tendon injury.Â  He recorded his first save of the season on June 23rd.

On July 24, 2018, the Orioles traded Britton to the New York Yankees in exchange for Dillion Tate, Cody Carroll, and Josh Rogers. Britton went on to post a 2.88 ERA in 25 appearances for the Yankees in the 2018 season. His 1.86 ERA from 2016 to 2018 was the lowest in major league baseball of all pitchers with 100 or more innings pitched. Britton thrived in his new role as a late-game reliever. Britton signed a three-year contract with an option for a fourth year with the Yankees on January 11, 2019

Britton would appear in 66 games for 61 innings, often the lefty was used to get just one important out.Â  He finished the season recording three saves and had an excellent ERA of 1.91 and a 3-1 record. In the 2018 and 2019 postseasons for the New York Yankees, he pitched in 12 innings while allowing just four runs. He also fields his position well with a .965 fielding percentage.

In the shortened 2020 season, at least at the start of the season, Zack Britton will return to his old role and will become the Yankees closer. Just two days ago Yankee Closer Aroldis Chapman tested positive for the coronavirus.Â  Before he can return to the team, he will have to self-quarantine for two weeks and then test negative twice, 2 days apart.Â  Many people after recovering from the virus remain weak for weeks, which is most likely why manager Aaron Boone used the phrase: â€œHe will be out for the foreseeable future.â€

During the summer of 2019, Zack Britton bought himself an Edgertronic camera. Here is why this should excite you.

â€œThe Yankees have high-speed cameras at the Stadium. Iâ€™ve noticed differences with both my breaking ball and my sinker. I can see where my hand position is when I throw a good pitch. Rather than just feeling my way through an adjustment, I can get instant feedback on the adjustments I need to make.â€

The New York Yankees organization and Yankee fans expected and got even more improvements in Brittonâ€™s pitching in this shortened season.Â  Upon the news of Chapmanâ€™s positive virus test manager Aaron Boone had to choose between Adam Ottavino and Zack Britton; both have similar numbers. Still, Boone chose Britton as he has the closing experience. Boone had this to say:

â€œBritton has been an elite closer in this game for a long time, and heâ€™s still a great pitcher, so he naturally could fill that role,â€ the Yankees skipper observed. â€œItâ€™s easy to put him in that, but with our team and with our bullpen and our pitchers, we feel confident in a lot of guys. Britt would be a natural guy if Chappy wasnâ€™t back at that point.â€

Britton finished this season with a 1-2 record with a crazy low 1.89 ERA in 20 games in the regular season. He had a total of eight saves. In the postseason, he pitched in four games against the Tampa Bay Rays, not allowing a run and only allowing one hit for an ERA of 0.00. The New York Yankees will now have Britton in pinstripes for the next two seasons.