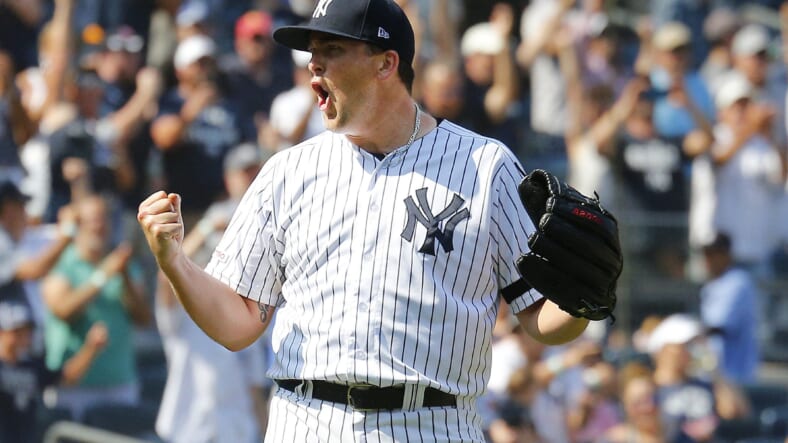 Aug 3, 2019; Bronx, NY, USA; New York Yankees relief pitcher Jonathan Holder (56) reacts after recording the final out of the game against the Boston Red Sox during game one of a doubleheader at Yankees Stadium. Mandatory Credit: Andy Marlin-USA TODAY Sports

New York Post | George A. King III: New York Yankees youth product Miguel Andujar is missing baseball more than you can imagine, especially after missing so much time in 2019 with a torn Labrum.

â€œI miss it a lot. You put together the fact that I missed so much time last year and then working myself back over many months and now we have to wait,â€™â€™ Andujar wrote to The Post on Thursday in an e-mail exchange.

The runner up for Rookie of the Year in 2018 is looking to find a spot on the starting team, and the probability is unlikely given his defensive efficiency. Hopefully, he can improve as an outfielder and earn reps in left field at some point during the 2020 campaign. Staying upbeat has been difficult for Andujar, but reports have indicated the MLB season could begin in the early portion of July.

Empire Sports Media | Nathan Solomon: While a sports hernia stunted Luke Voit’s growth with the Yankees in his second year, there’s hope that he can bounce back and have a stellar 2020 season. In 39 games during the 2018 season, Voit posted a .333 batting average with 14 homers and 33 RBIs. Voit’s incredible resurrection two years ago was a great sign for the Yankees, who previously featured Greg Bird at the position, which was problematic. Hopefully, he can continue his progression and hold down the first base spot in 2020.

Andres Chavez | Pinstripe Alley: Jonathan Holder had a difficult 2019 campaign, posting a 6.31 ERA. He was sent down to the minors at one point due to his disappointing performance, but he hols the talent to bounce back and be an effective player in 2020. However, aside from his bad ERA, he had a solid 4.45 FIP and 3.74 SIERA. His 3.14 ERA in 2018 was far better and represents what he’s capable of. A resurgence next season would be a big development for the Bombers.