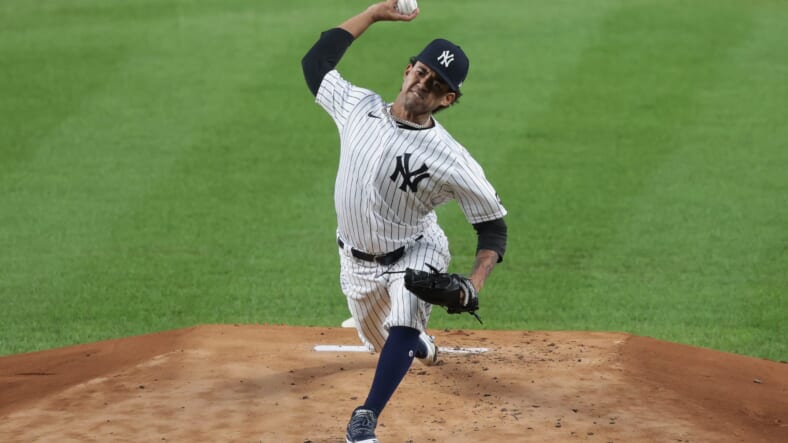 The New York Yankees are gearing up to face off against the Tampa Bay Rays in the ALDS, but the starting pitching rotation took a strange turn ahead of the opener on Monday evening.

Most expected the Yankees to utilize Gerrit Cole, Masahiro Tanaka, and JA Happ as a three-man rotation against Tampa, but they made an interesting change that could prove to be a boom or bust decision.

Manager Aaron Boone waited until about two hours before the opening pitch of the ALDS to determine the future of his rotation going into the series. Cole will obviously start game one, but young pitcher Deivi GarcÃ­a will actually step on the mound in game two as the starter.

This is a massive surprise, considering his lack of experience in the postseason and MLB as a whole. Over six games this year, Garcia has a 4.98 ERA over 34.1 innings. He has racked up 33 strikeouts and allowed 19 runs during that span, but he has had several solid performances that have brewed optimism within the Yankeesâ€™ base.

The New York Yankees are taking a huge risk:

Starting GarcÃ­a against a fantastic Rays team is a risky move, but he has had success on several occasions. Notably on September 9 against the Toronto Blue Jays, he lasted seven innings, allowing two earned runs and striking out six batters. He has been shaky at times, though, with his ERA gradually improving since that fantastic outing against Toronto. He concluded his 2020 regular season allowing four runs over 6.2 innings against the Miami Marlins.

It almost seems similar to how soccer players approach penalty shootouts. Sometimes, you have to save your best players for the most critical moments, and Tanaka starting in game three could be the turning point in the series. However, they must win game one with Cole on the mound.

Over one game this postseason, Tanaka has a 13.50 ERA, allowing six earned runs over 4.0 innings. He was problematic at best during the contest against Cleveland, which might have played into their decision to start GarcÃ­a in game two against Tampa.