New York Yankees linked to Nolan Arenado, but how true are the rumors? 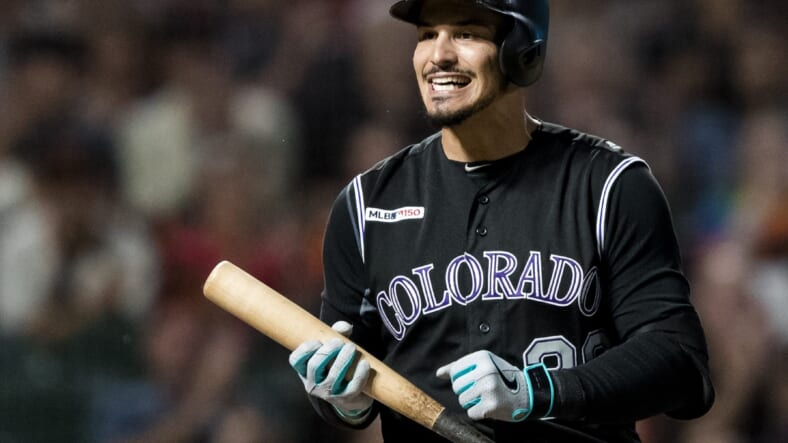 With Nolan Arenado on the fringe of being traded, of course, the New York Yankees are linked to the All-Star third baseman. There’s no need for GM Brian Cashman to even consider trading for Arenado considering his massive contract that would further push them into the luxury tax threshold, which they already surpassed after the Gerrit Cole signing.

So, now that we’ve got the reasons Arenado to the Yankees wouldn’t make sense out of the way, is there any legitimacy to these rumors?

As of now, only one so-called “source” has mentioned the two teams in the same sentence. A Twitter account called “MLB Marathon,” so take everything with a grain of salt.

#Yankees have emerged as a potential suitor for Arenado along with the #Cardinals, #Braves, and #Rangers. Unknown if Cashman would be willing to violate the luxury tax to that extreme. Remains to be seen if Arenado gets moved. #MLB

#Yankees will more than likely not meet the #Rockies asking price for Arenado. Something worth keeping an eye on however. The script can flip on a dime. #MLB

Odds for what team Nolan Arenado will be on for Week 1 of the 2020 MLB season, if he's traded (BetOnline):

Arenado to the Yankees seems to be the highest probability up to this point, but Manny Machado also topped that list in 2019. The reality is, the Yankees don’t need him with Gio Urshela and Miguel Andujar, both able to slide in and provide starting-level reps. However, Arenado is one of the best players in baseball, logging a .315 batting average and 41 homers in 2019.

The New York Yankees infield would be insane:

Plugging him into a Yankees infield consisting of DJ LeMahieu, Gleyber Torres, and Luke Voit would be borderline unfair, and that’s not even mentioning their overall offensive efficiency. The biggest turnoff for the Bombers and Cashman would be his contract, let alone the capital they would have to forfeit to gain his services. A preemptive deal would have to include Andujar, Deivi Garcia, Clint Frazier, or other prospects.

Nolan’s bloated eight-year, $260 million deal he signed before last season is a deterrent for the Bombers, who already host Giancarlo’s $26 million and climbing contract per season. Factor in the $35 million they just dished out to Cole and Aaron Judge’s future deal, and we can all but kiss the Arenado dreamscape goodbye.

Jim Bowden of The AthleticÂ released an article on Monday that viewed the Bombers as one of eight teams willing to negotiate, but it would cost them a boat-load of assets. The deal seems to be fair in stature, though.