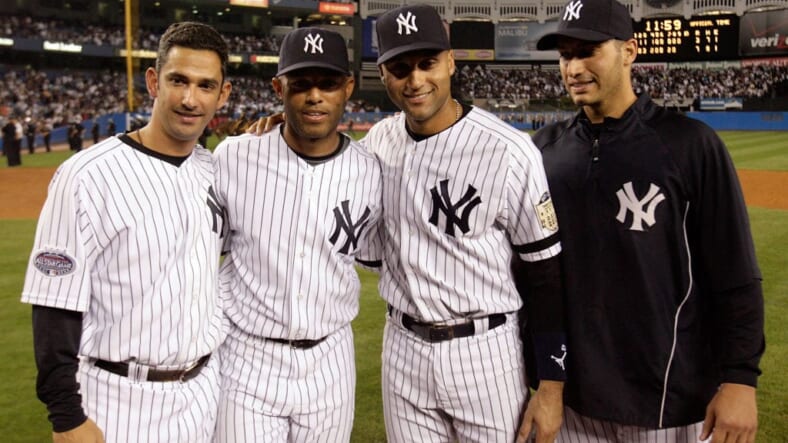 NEW YORK – SEPTEMBER 21: (L-R) Jorge Posada #20, Mariano Rivera #42, Derek Jeter #2 and Andy Pettitte #46 pose for a photograph after defeating the Baltimore Orioles of the New York Yankees during the last regular season game at Yankee Stadium on September 21, 2008 in the Bronx borough of New York City. The Yankees are playing their final season in the 85 year old ball park and plan on moving into the new Yankee Stadium across the street to start the 09 season. (Photo by Jim McIsaac/Getty Images)

Mel Stottlemyre is both a famous New York Yankee pitcher and long time pitching coach. Mel was born Melvin Leon Stottlemyre in Mabton, Washington, in 1941. He pitched for the Yankees for eleven years and coached for a historic record of 23 years for his Yankees.Â  As a pitcher, Mel started playing for his local American Legion post and went on to pitch in high school and at his college Yakima Valley.

Yankee scouts discovered him at Yakima and signed him to a contract in 1961. He was assigned to the minor league Harland Smokies. Shortly after a stint with the Auburn Yankees, he was promoted to the Greensboro Yankees, where he had a 17-9 record with an ERA of 2.50. In 1963 he was used as a starter and reliever, but Houk, the then Yankees manager, seeing his worth as a starter, demanded that he be used only as a starter.

In 1964 Mel was called up to the big team where he went 9-3 in a successful effort to get the Yankees to their fifth pennant in a row. In the World Series, he went 1-0-1. In 1965 he was made an All-Star but did not pitch in the game. He did win 20 games that year, 18 of them complete games, something that is unheard of today.

Stottlemyre got 20 wins in both 1968 and 1969. He started the 1969 All-Star game. Stottlemyre threw 40 shutouts in his 11-season career, the same number as Hall of Fame lefty Sany Koufax, which ties for 44th best all-time. Eighteen of those shutouts came in a three-season span from 1971â€“73. Mel was known as a pretty good hitter, too; in fact, he had a grand slam in 1965. The Yankees released Stottlemyre before the 1975 season. Stottlemyre retired with 164 career wins and a 2.97 ERA.

After a year off, Mel started his coaching career, first with the Mariners, then the Mets, followed by a coaching stint with the Houston Astros. When Joe Torre was named Yankees Manager in 1996, Mel joined his coaching staff as the New York Yankees pitching coach. In his first year, he brought the team ERA down from 4.65 to 3.81. Mel’s pitching staff was regarded as a major factor in the team’s dynasty years when they won four World Series Championships in five years. After 10 seasons, Stottlemyre resigned from his coaching position on October 12, 2005.

During the New York Yankees dynasty years of 1996-2005, Mel Stottlemyre was a key to the Yankees’ success.Â  He mentored Andy Pettitte, David Cone, Dwight Gooden,Â  Orlando Hernandez, Roger Clemmens, and David Welles, and others.Â  He especially worked with a young set-up man, Mariano Rivera who become a Hall of Fame closer.Â  Andy Pettitte and Mariano Rivera were the pitching members of the famous “Core 4,” which also included Derek Jeter and Jorge Posada.Â  Many believe Bernie Williams should have been recognized in that group.

Mel became pitching coach for the Mariners in 2008, but when the Manager was fired, he was fired along with him. Mel retired from baseball following that season.

He was inducted into the Washington State American Legion Baseball Hall of Fame in 2012. At Old-Timers’ Day on June 20, 2015, the Yankees dedicated a plaque in Monument Park in Stottlemyre’s honor. Mel was diagnosed with cancer in 2000 but went into remission for eleven years. Mel Passed away January 13, 2019, after a long battle with bone marrow cancer, but not before he published “Pride in Pinstripes” in 2007.

EmpireSportsMedia.com’s Columnist William Parlee is a member of the Society for American Baseball Research