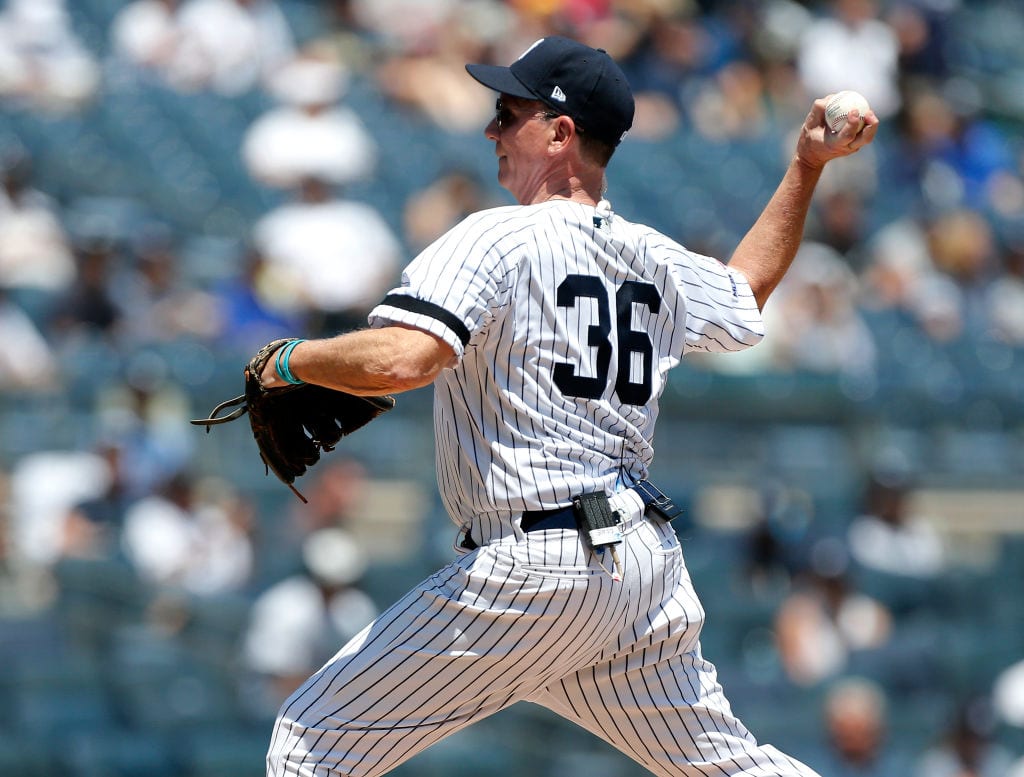 The Story of New York Yankees legend David Cone. It’s 1995; it’s the ALDS I’ve pitched 147 pitches, something unheard of today, even with a Justin Verlander or Gerrit Cole. I just walked the tying run in the eleventh inning that would cause us to lose the ALDS. My name is David Cone. Little did I know the best and worst challenges were yet to come in a historic career. Cone is not the atypical pitcher, he wasn’t imposing, doesn’t look athletic, and had the face of a choirboy, but he attained a place in sports history that few ever attain or even dream about.

Born David Brian Cone on January 2, 1963, in Kansas City, Missouri, he was last of four children born to hard-nosed, blue-collar parents, Ed and Sylvia Cone. His Dad, Ed, had dreams of being a pitcher himself but was a mechanic working 60 hour weeks. Ed felt sports was a way to get a better education and a better life for their children. He may have thought that, but in David’s case, he didn’t attend college and instead pursued a career as a baseball player, which was also improbable, as he came from a high school that had no baseball team. He attended Rockhurst High School and played football as a quarterback, leading them to a district championship. He was also a point guard for the basketball team.

Cone played baseball as a child locally, frequently playing alongside boys his older brothersâ€™ ages, David got used to fighting for what was his. He was cut from his first little league team at age seven because he was too small. He made it the next year, with Ed Cone as the new coach. In high school, he would play ball summers in a college league in Kansas City. He was noticed by scouts and was invited to an invitation-only try out at the Royals stadium for the St. Louis Cardinals.

He was also recruited to play football at the University of Missouri, where he enrolled, but the MLB draft would cut that short when he was drafted by the Kansas City Royals in 1981.

In his first two years in the minors, he would go 22-7 with an ERA of 2.21. The next year would see him sit out the season with an injury. When he returned, he never really returned to form. In 1986 he converted to a relief pitcher. On June 8th, he would make his major league debut in relief of Cy Young winner Brett Saberhagen. He made a few more games in relief but returned to the Omaha minor league team as a starter where he went 8-4 with a 2.79 ERA.

Prior to the 1987 season, David would see himself traded to the New York Mets, where he did not fare well in his first season. In 1988 he would pitch in relief again, but in May, they put him out to start a game and answered by pitching a complete-game shutout of the Atlanta Braves.

Cone spent over five seasons in his first stint with the New York Mets, most of the time serving as the team’s co-ace alongside Dwight Gooden while leading the National League in strikeouts in 1990 and 1991. He was successful with his fastball, curveball, and newly learned sidearm slider. Injuries worked in Cone’s favor, first when Dwight Gooden checked into rehab and again when Rick Aguilera’s elbow went, rocketing Cone into the starting rotation permanently. In that year, he won all of his games in May and eight in a row at the end of the season, going 20-3 with an ERA of 2.22.

Fans of David were starting to be called “Coneheads”. Cone really appealed to the New York media, as he was talkative, open, and honest. In 1992 the Mets were 14 games behind the first-place Pittsburgh Pirates, and Cone would be traded to the Toronto Blue Jays. In Toronto, Cone would have a short stay going 4 and 3 in the regular season. The Jays would go to the World Series that year and be the first Canadian team to win a World Series.

Cone in the postseason would be 1-1 with an ERA of 3.22. After the season, David would be a free agent and would return to his home town Kansas City Royals. He wouldn’t have his most impressive season going 11-14 despite his 3.33 ERA. 1994 would see him 16-5 in the shortened season, but Cone would receive the Cy Young Award. Four days after the strike ended, Cone would be traded back to the Jays. He was 9â€“6 with a 3.38 ERA for Toronto, but with Toronto in fifth place at the All-Star break, they again would trade Cone, this time to the New York Yankees.

Cone is traded to the New York Yankees

At the half with the Yankees trailing the Red Sox for the 1995 AL East, Cone instantly became the team’s ace and would post a 9-2 record as the Yankees won the wild card in the first season of the new three division, wild card format. The Yankees would take the Wild Card and go on to the ALDS against Seattle. Cone would famously blow game five and the series but still talked openly with reporters.

1996 would be a challenging season for Cone in many ways. First he resigned with the New York Yankees with a three-year contract. Early in the season he would be 4-1 with a 2.02 ERA. Then Cone was diagnosed with a life-threatening aneurysm. He was on the DL for over 3 months. In his comeback start that September against the Oakland Athletics, Cone pitched a no-hitter through seven innings before he had to leave due to pitch count restrictions. The Yankees would go onto the ALDS, in which Cone lost his game. In the ALCS, he had a no-decision. In game 3 of the World Series he would give up only one run in six innings against the Braves Tom Glavine. The Yankees would go on to win it’s first World Series in eighteen years.

In 1998 Cone would go 20-7, his second 20 game season, and the longest span between 20 game wins (11). Cone would win his ALDS game, His ALCS game, and his game 3 of the World Series against the Padres as the Yankees would repeat in the World Championship.Â  Setting the scene, it’s a beautiful sunny day at Yankee Stadium. Forty-three years earlier, New York Yankee legend Yogi Berra caught Don Larsen’s first ever in a World Series perfect game.Â  That day on July 18, 1999, both Larsen and Yogi were in the stands to take in the game.Â  The starting pitcher would be David Cone. On that date, the Yankees had won 13 of his 17 starts. In the game against the Montreal Expos, David would go 27 up, 27 down for the third perfect game in New York Yankee history.

The Yankees would three-peat and win the World Series. Strangely after the perfect game, Cone would not return to form and would have his worst year in 2000, going 4-14. In an exciting move, the Yankees would bring Cone in to face one batter, Mike Piazza in Game 4 of the 2000 World Series. Cone induced a pop-up to end the inning and give Jeff Nelson the win and the Yankees another World Series win.

In a move, the NY media would call “traitor,” and Cone would call a divorce; Cone would sign with the Red Sox for a one year deal. He would go 9-7 in 2001 and his contract would not be renewed. He did not pitch in 2002. In 2003 he attempted a comeback with the Mets, but, in May, he realized his pitching style that was hard on his hips had taken its toll, and he retired from baseball. Cone during his baseball career would be in five All-Star games, would be nominated twice for the MVP award, and would be nominated five times for the Cy Young award, he won the Cy Young in 1994.

In 2008, he became a part-time color commentator for the YES Network, among a rotating team of announcers providing in-game, and studio analysis. Cone has won praise as a perceptive student of sabermetrics, with observations ranging from complicated statistics to technical analysis of how the ball spins across the plate. In one interview he would say â€œEvery year itâ€™s become a little easier, knowing what the job entails, when to use sabermetrics and when not to,â€ said Cone. â€œI try to be an easy listen. I try to tell you something you donâ€™t know.â€