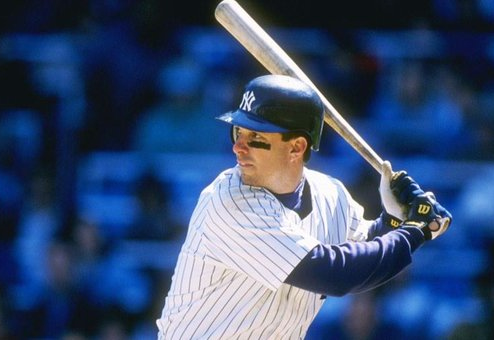 The New York Yankees have been blessed with many great players over the years. Today we look at the multi-talented “Tino” Martinez.

Constantino Martinez was born in Tampa, Florida,, to a Cuban American father and Greek mother on December 7, 1967. As a young boy, he worked in his Grandfather’s small cigar factory. In his spare time and after school, he could be found on local ball fields playing a game he loved, baseball. When older,, he attended Tampa Catholic High School for two years and the final two years at Jefferson High School. He won state championships for both schools before enrolling in the University of Tampa.

In his three years as the first baseman for the University of Tampa, Martinez was a three-time first-team All-SSC, all-South Region, and All-America pick and being selected to the Academic All-America team. Playing in his hometown of Tampa, he broke school records for batting average (.398), home runs (54), and runs batted in (222). In 1988, he was a finalist for the Golden Spikes Award, which is given to the top collegiate baseball player in the nation at any division level. Martinez was a USA team member whoer who won the 1988 Olympic gold medal in baseball in Korea. In the series’s series’s final game, he hit two home runs in a complete game pitched by Jim Abbot. Also, he was the most valuable player of the World Amateur Championships in Italy in 1988. That same year he was also named Tampa Sports Club Amateur Athlete of the Year.

Tino was drafted in 1988 by the Seattle Mariners,, where he played under manager Lou Pinella, who had also grown up in Tino’s west Tampa neighborhood. Pinella knew some of his family. Tino wasn’t the greatest during his first few years but broke out in 1995 when he batted .293 with 31 home runs and 111 RBI’s. He would go on to play the Yankees in the ALDS. Neither the Mariners nor Yankees would advance to the World Series that was won by the Atlanta Braves. Following that season,, Tino was traded to the New York Yankees.

Tino had big shoes to fill as he was replacing Don Mattingly at first base. In two stints with the Yankees, he would end up playing seven seasons in the Bronx. He played his best ball with the Yankees from 1996 through 2001. His best year was 1997,, when he hit .296 with 44 home runs with 141 runs driven in. Stats any ballplayer would love to have. He ended the season with the Silver Slugger Award, was an All-Star and MVP nominee. But all of his efforts didn’t get the New York Yankees a World Series win. He helped the Yankees get to four World Series in his time, 1996, 1998, 1999, and 2000. He won the home run derby in 1997.

Tino was a great defender at first base but also seemed to be up at the plate at an important moment and almost always was clutch. His most important home run as a Yankee game in game 1 of the 1998 World Series. The Yankees had tied the game earlier in the inning with a Chuck Knoblauch 3-run home run. The following three batters got on base, and Martinez came to the plate. After taking a very close ball 3, he hit a grand slam into the upper deck on a 3-2 count, giving the Yankees a four-run lead. Another highlight came in the 2001 Diamondback series; Tino would homer with one on in the ninth inning to tie up the game, which the New York Yankees eventually lost when Mariano Rivera gave up the save in game seven.

In 2002 the Yankees did not renew his contract in favor of signing power hitter Jason Giambi replacing him at first. Tino would do his own replacing by replacing legend Mark McGwire at first for the St. Louis Cardinals. Although his defense at first remained solid in his time with the Cardinals, ,his bat would suffer several prolonged slumps. During this tenure with the Cardinals, one of his most memorable moments came when he returned to Yankee Stadium during a series in 2003. An emotional Martinez was driven to tears when he went to bat as he was given a standing ovation by the Yankee fans who appreciated the integral part he played during the team’s last dynastic run. In the second game of the three-game series, Martinez hit 2 home runs off former teammate Andy Pettitte to a loud thunderous ovation both times. The Yankee fans cheered him for a curtain call, a rare occurrence in honor of a visiting team’s player.

After the season,, the Cards would trade Tino to the Tampa Bay Rays. Tino was happy to be home,, and the fans loved their hometown hero, but his stay would be short-lived as he again signed with his beloved Yankees before the start of the 2005 season. In May for the Yankees, he would hit five home runs in five consecutive games. The Yankees did not get past the ALDS that year, losing to the Angels in five games. After the season,, the Yankees declined Tino’s option,, and he became a free agent. On February 15, 2006, he announced that he was retiring from baseball. He would later go on to be a coach and a broadcaster for ESPN. The Silver Slugger, two-time All-Star, and two-time MVP candidate is still one of the most popular players of the Dynasty era.

Some say that Yankees Stadium was built for the lefty hitting Martinez as he frequently took advantage of the short porch. They Yankee fans and organization thought so much of Tino Martinez, that on June 21, 2014 it was declared Tino Day at Yankee Stadium. On that day he was awarded a plaque in Monument Park, the Yankees’ equivalent of Hall of Fame enshrinement.