New York Yankees: Legend Mariano Rivera to be inducted into Hall of Fame 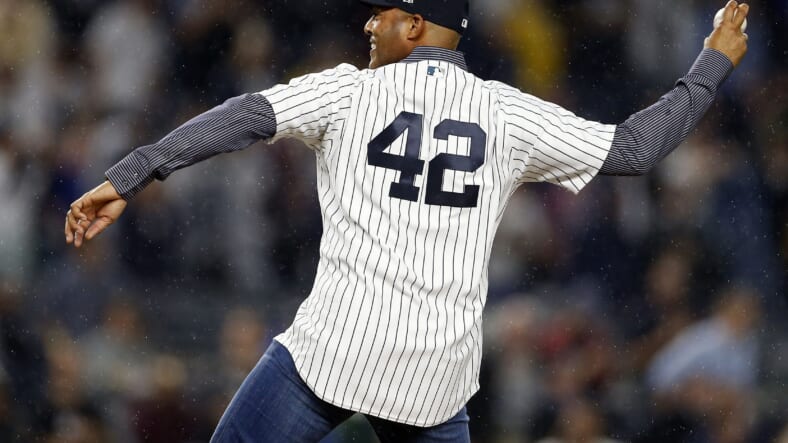 New York Yankees legend, Mariano Rivera, will be inducted into the Baseball Hall of Fame on Sunday. “Mo” had an unbelievable career with the Yankees, and is credited to a lot of the club’s past success. Unsurprisingly, he was voted first ballot with an astounding 425Â votes. Congratulations Mo!

River’s career is nothing short of special. A 13 time All-Star and a nine-time MVP candidate (Baseball Reference), Rivera goes down as the best closer in Major League Baseball history.Â  He holds the all-time record of 652 games saved and 952 games finished.

Dominance in the postseason

As phenomenal as he was in the regular season, he is mostly remembered for his dominance in the playoffs. His unbelievable postseason 0.70 ERA among 16 years is nothing short of legendary. The most dominance Mo displayed was in the 1999 postseason and World Series. In three appearances in the World Series, he went 1-0 with two saves while only allowing four baserunners. Because of his dominance, Rivera earned the MVP award for that World Series.

Among all the monumental records and statistics Rivera posted, the most impressive one: more people have walked the moon (12) than men who have scored against Mariano Rivera in the postseason (11). That ridiculous stat sums up Rivera’s postseason career in one sentence.

Another Yankee legend and soon-to-be Hall of Famer, Derek Jeter, had this to say about his teammate in a blog post on his website, The Player’ Tribune: “The thing I respect most about Mo is that what you see is what you get. A lot of people I’ve met over the years, they’ve asked me what Mariano Rivera is like off the field. And I’ll tell you what I tell them – which is that he’s pretty much the same person you watched for all those years on the mound.”