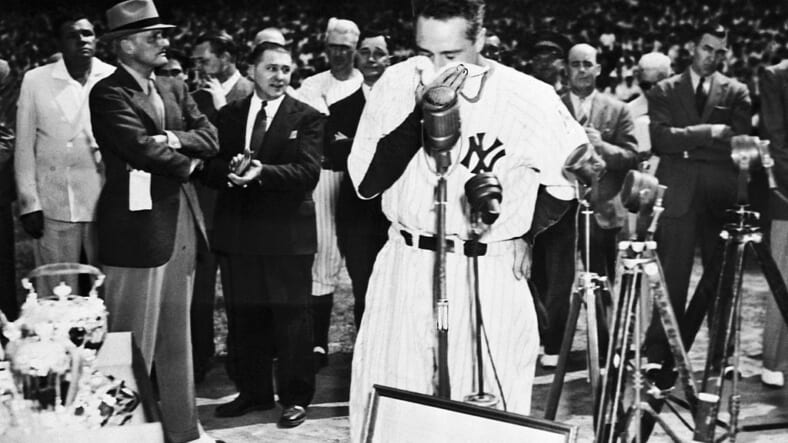 (Original Caption) 7/4/39-New York: Lou Gehrig, the "Iron Horse" of baseball, who was forced to the bency by amyotrophic lateral scherosis after playing 2,130 consecutive games, is touched by fans demonstration as he is acclaimed in a manner unrivaled in baseball history. Upwards of 75,000 jammed Yankee Stadium to honor Lou. He is shown here--handkerchief to his face, deeply moved by the ovation they gave him.

New York Yankees’ legend and Major League Baseball Hall of Famer Lou Gehrig would have been 117 years old today, being born on June 19, 1903. Gehrig played 17 years in the Major Leagues, all of them being with the New York Yankees. In those 17 years, Gehrig racked up a total of seven All-Star games (the first one ever being in 1933 and Gehrig made the midsummer classic every year to finish his career), was named MVP two times in 1927 and 1936, and was a six-time World Series Champion.

Gehrig is most known for his incredible consecutive games streak of 2,130. Although Cal Ripken would break that record years later, Gehrig is remembered as an MLB great who ended his career when he delivered his famous “Luckiest Man” speech on July 4, 1939.

Gehrig was diagnosed with Amyotrophic Lateral Sclerosis (ALS) on June 19, 1939, which is also his birthday. ALS is now known commonly as “Lou Gehrig’s Disease,” since he was a national figure and won the hearts of many. He passed away on June 2, 1941, two years after his famed speech.

Lou Gehrig was truly an idol and goes down without a doubt as one of the greatest Yankees of all time. In his “Luckiest Man” speech he spoke on his time in pinstripes:

“Fans, for the past two weeks you have been reading about the bad break I got. Yet today I consider myself the luckiest man on the face of this earth. I have been in ballparks for 17 years and have never received anything but kindness and encouragement from you fans”