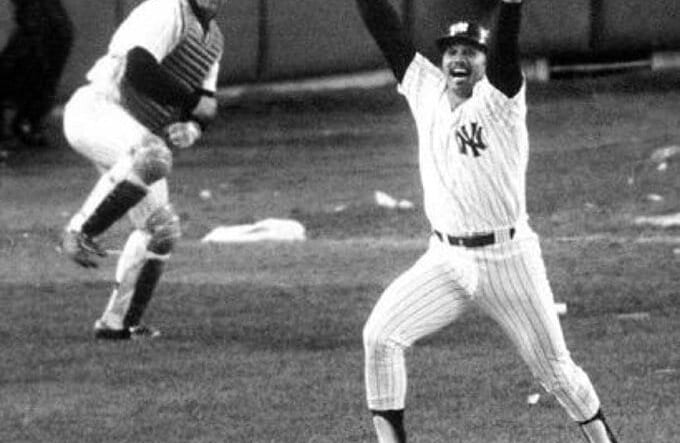 On a cold New York Yankees autumn night on October 14, 1976, the fifth game of a winner take all ALCS game, the game would be at a standstill in the bottom of the ninth. Kansas City relief pitcher Mark Littell would be taking warm-up tosses, Yankee public address announcer Bob Sheppard was cautioning the crowd of over 58,000 about throwing debris onto the playing field. The game had already been stopped several times for bottles, firecrackers, beer cans, and rolls of toilet paper being thrown from the stands.
Meanwhile Yankee first baseman Chris Chambliss waited in the cold. The delay prevented Littell from staying loose and interfered with his rhythm. Finally, at 11:13 PM, Chambliss stepped into the batterâ€™s box, and home-plate umpire Art Frantz yelled â€œPlay ball.â€ Littell would throw Chris a high fastball that Chambliss would smash over the right-field wall, for a walk-off win and one of the most iconic moments in baseball history, as the Yankee fans emptied the stands and filled the fields.
https://www.youtube.com/watch?v=NfrKPr89igs
There were so many people on the field and blocking home plate that Chambliss wasnâ€™t actually sure he stepped on the plate. Discussing it with Graig Nettles, Nettles suggested he go back out and step on the home plate so that the umpires wouldnâ€™t say he missed the plate, and not count the run. Chambliss borrowed a police raincoat as a disguise and returned to the filed and stepped on home plate, that sealed the deal.
Carroll Christopher Chambliss was born on December 26, 1948, in Dayton, Ohio. Chris was the third son of Reverend Carroll and Christine Chambliss. Being a Navy Chaplain they lived in several cities, finally ending up in Oceanside, California, where Chris attended high school, playing both shortstop and first base on the varsity baseball team. He and his three other brothers attended Mira Costa Jr. College. In 1967 and 1968 he would be drafted by the Reds, but instead attended UCLA. There he played for the Anchorage Glacier Pilots, helping the team capture the National Baseball Congress Championship, which culminated with a 5-1 win over Liberal, Kansas. Chris hit .583 during the NBC Tournament and was named the Most Valuable Player.
In the January 1970 draft, the Cleveland Indians picked Chris with the first pick in the first round and assigned him to their affiliate in Wichita of the American Association, Clevelandâ€™s top farm team. Chris earned Rookie of the Year honors while at Wichita, becoming the first freshman to win the batting title, posting a .342 average. He would make his major league debut in 1971, and in 111 games hit would bat to a .275 average with nine home runs. After two more successful seasons with the Indians he would be traded to the Yankees, after seventeen games at the start of the 1974 season after hitting .328 so far that year. While with the Yankees Chambliss would be an excellent defender at his position on first and a Gold Glover.
In 1976 and 1977 he would hit 17 home runs and be an All-Star and two-time MVP nominee for the New York Yankees. 1976 was also the year in the postseason that he hit his famous walk-off homer. 1976 is also the year that George Steinbrenner would bring pitcher Don Gullett, Bucky Dent, Oscar Gamble, and Reggie Jackson to the team. Jackson was signed against manager Billy Martinâ€™s objections. Martin was noticeably absent when the Yankees introduced Jackson to the press. At one time Martin would say Jackson may be Mr. October, but Chris Chambliss is Mr. Season. The Yankees would win the ALCS from Kansas City and the World Series from the Dodgers in 1977 and in 1978.
After the 1979 season, the New York Yankees would be looking for a qualified catcher to replace Thurman Munson that had died in a plane crash and would trade Chambliss to the Atlanta Braves where he would play out the last seven years of his 17-year career while being an MVP nominee once again. He finished his Yankee career hitting .282 with 79 home runs and 454 RBIâ€™s.
Chris now 72, and his wife Audry reside in Alpharetta, Georgia. They had a son Russell who played in the Yankee farm system until he quit to become a teacher. Chris was a hitting coach for a time with the Atlanta Braves. in 1989 he became manager of the double-A London Tigers. He had been considered several times to manage in the majors by the Mets, Dodgers, White Sox, and the Diamondbacks, but was never hired. He finished his career in baseball coaching for the Seattle Mariners in 2012 at the age of 64. He will be forever remembered for the blast that emptied the stands at Yankee Stadium.