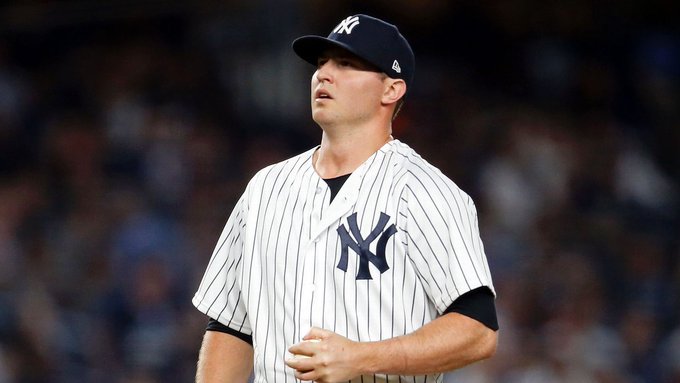 Although not as bad as the last two years, the New York Yankees have had their share of injuries. But the future looks bright with most injured players being back with the team in the month of July, some sooner. Here are the latest updates.

We start off with Zack Britton returning from bone chip surgery as he will be back to the team sooner than any other player on this list. Manager Aaron Boone said on Thursday that Britton is doing well coming off his first rehab game. Boone suggested that Britton would be activated off the IL during this road trip which could be as early as today, but more like will be during the Blue Jays series in Buffalo.

After a successful first rehab start (2 2/3 1 run), Severino will make his second rehab start with the Hudson Valley Renegades this afternoon. Aaron Boone has stated that Severino’s starts will be six days apart. He is drawing closer to the return to Yankee Stadium, which is still projected to be in a month or so. He will probably only be built up to 50-60 pitches when he returns and will finish building up over several games, hoping that he will be fully stretched out by the postseason.

As reported by Aaron Boone, Voit will have his first rehab game at Scranton Wilkes/Barre early next week. He could return to the team after a week of rehab games.

MLB.com reports that O’Day has increased his throwing distance to 120 feet on the flat and that he may start throwing off the mound soon. Projected return to the team something before the All-Star break.

Max Goodman of Sports Illustrated has reported that Schmidt has been throwing bullpens. But so far, he is only throwing his fastballs. His projected return to the team is also sometime in July.

Aaron Boone stated on Tuesday that Wilson is responding well to treatment of his hamstring injury but did not indicate when he might pitch for the team.

LaMarre started rehab games this week at Scranton Wilkes/Barre. He could be available to the major league time in a week or two at the most.

As of the last update, Kluber is still tossing the ball but has not thrown off the mound. He is still projected to be out until early August if all goes well.

The has been no change in Hick’s recovery from wrist surgery. If he returns to the team this season, it likely will not be before September at best.