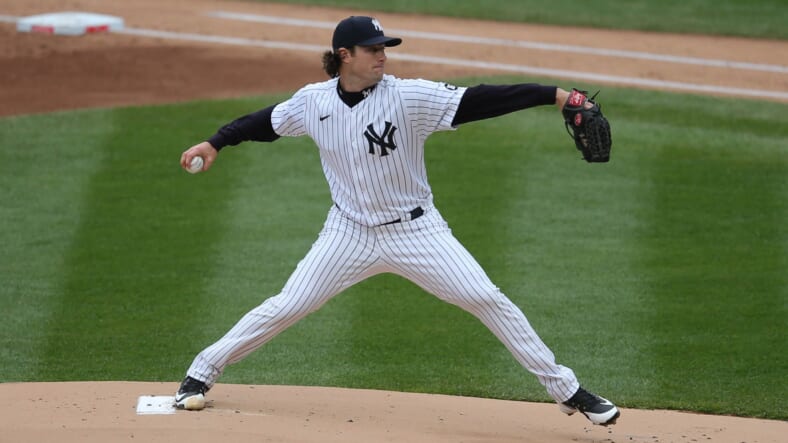 The New York Yankees are coming off a series win against the second-best team in baseball, the Oakland Athletics. They now have a day off to evaluate their play and prepare for a three-game series at Yankee Stadium against the Kansas City Royals. Starting on Tuesday evening, the Royals will face the Yankee’s ace, Gerrit Cole. The Yankees, with the series win against the A’s, are now just 4.5 games behind the East-leading Boston Red Sox and winning six games of their last ten. The Royals trail the Central-leading White Sox by ten games and have lost 7 of their last 10.

Yesterday the Royals went behind 2-0 in the top of the first inning with both the Royals and the Red Sox playing some pretty sloppy baseball. But the Royals came convincingly back to win the game 7-3. The Yankees had a squeaker yesterday when Gary Sanchez hit the winning hit, and the Yankees had a triple play in the ninth inning.

Gerrit Cole will start the first game of the Kansas City Royals series at the Stadium in the Bronx on Tuesday night. The right-hander is 8-3 with an ERA of 2.31 and with 117 strikeouts on the season. Cole tossed a season-high-tying eight innings Wednesday against the Blue Jays, allowing only two runs on four hits. His 117 strikeouts through his first 14 starts are the most by any Yankees pitcher in his first 14 starts of a season. The only Royals player who has been successful off of Cole is Whit Merryfield; in seven at-bats, he has a .286 record.
As of this writing, the Royals have not released the names of the starters for any of the three games at the Stadium. The Royals would have liked Danny Duffy to start against Cole, but he is on the IL.Â  Looking at the Royals’ starts, it’s hard to predict who will start against Cole. In the three-game series, the Yankees likely will see Brady Singer, Brad Keller, and Kris Bubic. During the series, the Royals may have to put together a bullpen start due to the missing Danny Duffy.
Wednesday, June 23rd, 7:05 pm:
Wednesday night’s starter for the New York Yankees will be Michael King, who was bought up as a replacement for Corey Kluber, who is nursing a bad shoulder. King, since being brought up, is 0-3 with an ERA of 4.08. He has pitched better than the stats would indicate. King scattered five hits and two walks across 4 1/3 innings last time out, aided by the Yankeesâ€™ second triple play of the season in the first inning. He has allowed three earned runs or fewer in three of his past four starts. None of the Royal batters have seen King, except for Alberto Hanser, who had one hit in two plate appearances.
Thursday, June 24th, 1:05 pm:
Jameson Taillon will start Thursday’s matinee. Of late, when Taillon is on the mound for the Yankees, it’s almost an automatic loss. Taillon has not found his form yet and has been the Yankees’ most undependable pitcher.Â  In his next to the last start, he only lasted 1/3 of an inning, giving up four earned runs. The last start he went
4 2/3 innings of two-run ball. The Yankees have lost his last four starts. This will make his second career start vs. the Royals, having tossed seven scoreless innings with 11 strikeouts in a 2018 no-decision. Jared Dyson has had good luck off of Taillon hitting .333.
All of the games will be televised on Bally Sports Kansas City and the YES Network. Thursday’s matinee will also be on MLBN out of market.