New York Yankees: Judge vs. Altuve, how are they doing now? 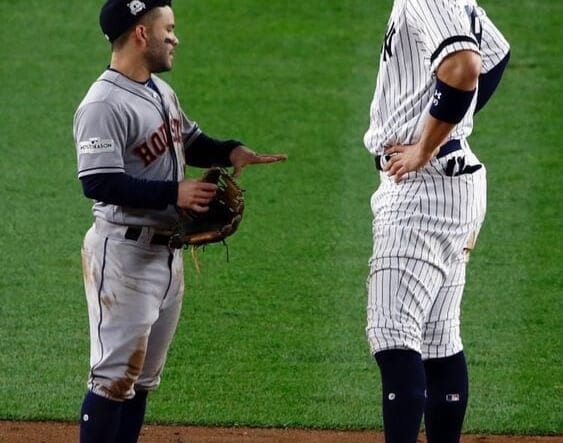 The New York Yankees Aaron Judge and the Houston Astros’ Jose Altuve have a storyline that starts long before the cheating scandal that the Astros were enveloped in. Altuve is an eleven-year veteran that made his major league debut at the age of 20 in 2011. At the time, he was one of the shortest players in the game, and that still stands today at just 5 feet 6 inches, and even that may be an exaggeration. Judge, on the other hand, made his major league debut at the age of 24. Judge is 6 foot 7 inches. The size difference between the two stars had made the two internet fodder from the first time they were seen together.

Aaron Judge looks like a giant and Jose Altuve a little person when you see the two together. There is good reason for that; Judge looks a good two feet taller than Altuve, although, in reality, it is only eleven inches. Add to that; Judge is almost 120 pounds of muscle heavier than Altuve. Little did they know at the first meeting that the two would be drawn apart by one of the most egregious scandals in baseball.

After the 2017 season, Jose Altuve was named the MVP of the American League. Aaron Judge came in second in the voting. Altuve finished the year batting .346 with 24 home runs and an OPS of .957. He won the MVP, was a Silver Slugger, and an All-Star. At the end of the season, Judge had a batting average of .284 with 52 home runs and an OPS of 1.049. He was the Rookie of the year, an All-Star, a Silver Slugger, and came in second in the MVP voting even though he had the higher WAR. It is common for the Championship winner to get the most votes. It was announced after a long investigation on February 18, 2020, that MLB had proved that the Houston Astros cheated by electronically stealing signs in the 2017 season and into the playoffs.

With that announcement, the rift between the two players gained momentum. Judge and the entire New York Yankee organization realized that not only Judge’s slight in the MVP voting may have been caused by Altuve taking part in cheating, but the Yankees themselves may have been denied a shot at a 28th World Championship. The rift increased when the Yankees learned that not a single player would be charged or punished for their part in the scandal.

Commissioner Rob Manfred suspended manager A.J. Hinch for a year for his part in the systemic cheating scandal. The same suspension was issued to the club’s general manager Jeff Luhnow. Upon learning of the MLB decision, Astro’s owner Jim Crane fired both employees. Luhnow launched an unsuccessful lawsuit against Crane and MLB, claiming that he was being used as a scapegoat. However, the MLB investigation showed that the cheating was teamwide, and it was unbelievable that everyone not only wouldn’t have known about it but did nothing to stop it.

The cheating was thought to be so widespread that it had further implications. Newly hired Boston Red Sox manager Alex Cora, the Houston Astros bench coach, was fired by the Red Sox for his part in the scandal. Newly hired New York Mets manager Carlos Beltran was also fired for his part. But because the Houston Astros players cooperated with the investigation, they were allowed to go scot-free, not being charged or implicated in any way.

Much to the chagrin of the New York Yankees, the Los Angeles Dodgers who lost to the Astros in the 2017 World Series, and all the other MLB teams, the Astros were not stripped of their title that they didn’t deserve. Also, all the players maintained their World Series rings. The only solace for the Yankees is that the Astros will always be known as the team that stole a World Series victory.

This writer will let Aaron Judge speak for the team and how they felt when the February 18th news was released.

“the team should vacate the title and that players should have been punished. … You cheated and you didn’t earn it,”

The relationship between the two teams has been permanently ruined and will likely never be repaired. Although manager Aaron Boone has said he has put it behind him, that may not hold for Aaron Judge and many of the other New York Yankee players.

Last night due to the league alignment in the shortened 2020 pandemic season, the Astros met up with the Yankees for the first time since the cheating scandal was revealed. The Yankee fans got to show the Astros how they felt about them. Fans all over the Stadium that was limited to only 10,800 had signs saying shame, and you cheated, among many others, some not as dignified. The entire game was electric at the Stadium; many players after the game said that it had a “playoff feel.”

The fans stood more than sat throughout the game, rooting on the Yankees in the eventual 7-3 win over the Astros. The Yankee fans remained mostly under control, although there was constant booing when each Astro player was introduced. It wasn’t just in the first inning; it was throughout the game with second baseman Jose Altuve receiving the brunt of the shame and the loudest boos. Several times during the game, the fans resorted to chants repeating Altuve’s name over and over again. Tonight and again on Thursday, the two teams will meet again, don’t expect that the boos stopped with last night’s game.

Throughout Jose Altuve’s career, like it or not, he has been the better player, mostly because his little body has stayed healthy, whereas Judge’s hulking frame has not. With Aaron Judge healthy so far this year, he is tied for the most home runs and the most RBI’s with Giancarlo Stanton. Judge has a career WAR of 20.5, Altuve’s career WAR sits at 36.5. Altuve is having a bit of a rough start this season. He is batting .247 with only one home run and is 1 for 24 in his last plate appearances. Last night he ground out once and struck out three times.