New York Yankees: Judge and Stanton prepare to stay on the field 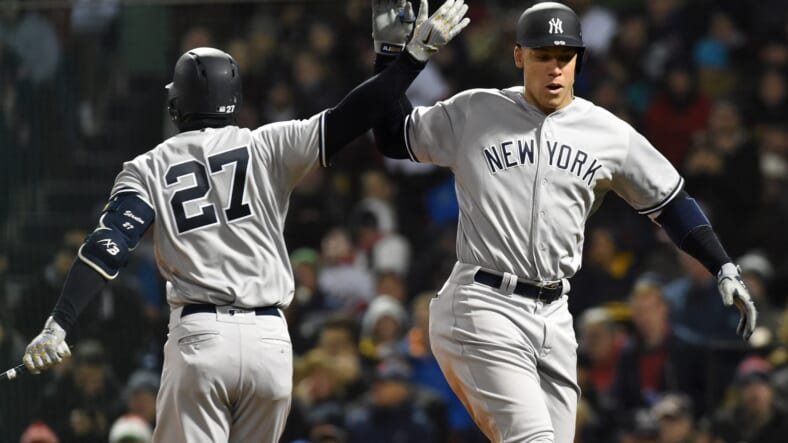 It’s no secret that the New York Yankees have endured a couple of seasons where their players have had trouble staying off the IL. Two of those players are the team’s most powerful sluggers, Aaron Judge, and Giancarlo Stanton. Both of those players have had trouble staying on the playing surface of Yankee Stadium. The Yankees, in search of their 28th World Championship, need these two players to stay healthy.

Both of these guys and hit for the stars when they are healthy. Judge hit 52 home runs in 2017, leading the American League. In the same year, Stanton bettered him, hitting 59 long balls for the most in the National League. He was named the NL MVP that year. But both of them since then have been dogged with injury after injury.Â  The New York Yankees training and strength/conditioning departments are headed by Eric Cressey, who is doing everything he can to change that.

Number one, both players had been hitting the weight room less this offseason. Both of these players are monsters in their own way. Judge had played in just 63% (242 of 384) of the Yankeesâ€™ regular-season games since 2017 when he played in 155 games. Meanwhile, Stanton played 158 regular-season games when he joined the team in 2018 but has participated in only 18.4% (42 of 222) since then.

Both players under Cressey’s direction are preparing to stay healthy during the 2021 season. Cressey had reported when talking to Meredith Marakovits on the YES Network’s Hot Stove Thursday night that Aaron Judge, at 6-foot-7 and 282 pounds, in particular, has taken a heavy interest in a lot of Yoga to be more agile. Cressey said, â€œIn both cases, they lifted less than they have in the past.â€ Stanton is also a monster at 6-foot-6, 245 pounds.

Many detractors of the two players suspect all their muscles are a hindrance in staying healthy when playing and that their musclebound frames might be better suited for the NFL or NBA, not baseball. Cressey is trying his best to change that perception.

â€œThose are guys that I think the world of,â€ the trainer said. â€œTheyâ€™re amazing workers. The first thing you have to say is, any time you see an athlete like that â€¦ thereâ€™s a perception theyâ€™re not working hard. That couldnâ€™t be further from the truth. Those guys are rock stars in every aspect of their preparation.â€

â€œYou also need to be mindful of the stressors that are on guys who are 6-foot-7, 6-foot-8, big dudes standing around for long periods of time in cleats,â€ he said. â€œThose are things that normal people donâ€™t encounter. Weâ€™ve understood that their preparation needs to be markedly different in terms of not just building them up as athletes, but building them up as baseball players where thereâ€™s a gradual on-ramping of those specific stressors â€” running the bases, changing direction, swinging.â€

Last year, Giancarlo Stanton played in only 18 games in the regular season after pulling a hamstring in Tampa against the Tampa Bay Rays. He did a lot of rehab that involved agility training, and he came back near the end of the short 60 game coronavirus season. To show the kind of player he can be when healthy, he was the Yankee postseason star even though the Yankees exited too early. In the seven games of the postseason, he hit .301 with six home runs. Judge before his injury, was leading baseball with 9 home runs in just 18 games.

The New York Yankees this offseason have done much to improve the team from 2020. Their main priority was to re-sign batting champ DJ LeMahieu which they were finally successful doing. They also have cleaned house with the starting pitching staff, hired 2 time Cy Young Award-winning Corey Kluber, and traded for starter Jameson Taillon. They added the best reliever in baseball last year in Darren O’Day while offloading the struggling Adam Ottavino. With these upgrades, the Yankees need Aaron Judge and Giancarlo Stanton to stay healthy and perform as they can, and they are hoping the changes the two have made this offseason will make that a reality.