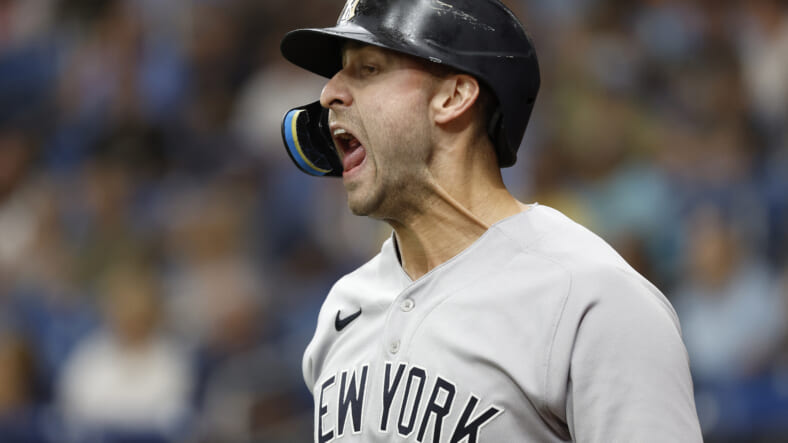 May 27, 2022; St. Petersburg, Florida, USA; New York Yankees left fielder Joey Gallo (13) looks on as he is on deck to bat during the second inning against the Tampa Bay Rays at Tropicana Field. Mandatory Credit: Kim Klement-USA TODAY Sports

It is no surprise that former New York Yankees slugger Joey Gallo has revived his season with the Los Angeles Dodgers after being traded at the deadline.

On his way out, Gallo shot back at New York and Yankee fans, indicating how harsh they were and how he couldn’t even leave his apartment without feeling awful about himself.

Moving to Los Angeles was a good move for both teams, but it is only fair that the Yankees are now struggling considerably without Gallo while he’s enjoying success with the Dodgers.

“It was good for both sides,” Gallo said. “It was the best opportunity for me, and for them they got a great All-Star outfielder to play in my place. I’ll never have any hard feelings about that, I didn’t do my job to my abilities, but it’s always nice to have a fresh start.”

However, Dodger fans are a bit tamer than the hostile voices and mannerisms of Yankee fans, who normally voice their displeasure when players are laboring. Over the weekend, Gallo smashed a home run, enjoying some cheers that have escaped his ears for quite some time.

“It’s been a while since I’ve heard people chanting for me, so I’m pretty excited about that.”

The Yankees have lost eight of their last 10 games, finally scraping by a struggling Boston Red Sox team on Saturday evening, courtesy of an Isiah Kiner-Falefa two-run homer and bunt single in the ninth inning. Nobody expected IKF to rise to the occasion, but he was due for a big game after being tortured by fans, similar to Gallo.