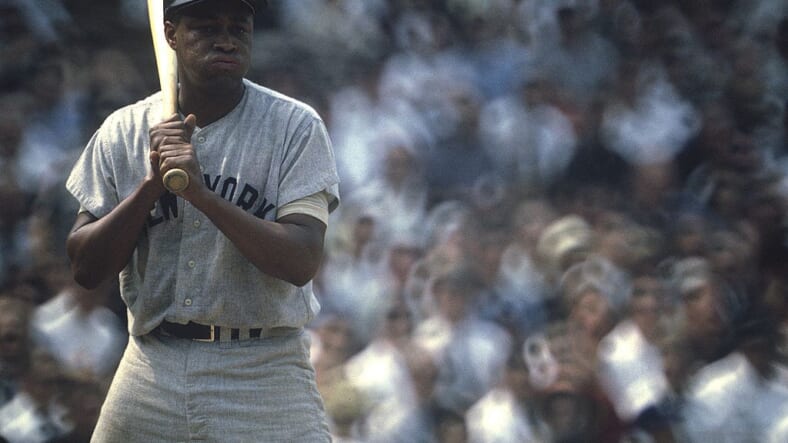 UNSPECIFIED - CIRCA 1964: Elston Howard #32 of the New York Yankees bats during an Major League Baseball game circa 1964. Howard played for the Yankees from 1955-67. (Photo by Focus on Sport/Getty Images)

The New York Yankees will celebrate Jackie Robinson Day tomorrow when they meet up with the Tampa Bay Rays at Yankee Stadium. All of baseball celebrates the day honoring the major league’s first black Major League player traditionally on April 15; however, for teams that have the day off as the Yankees do, it is celebrated on Friday. All players will wear his number 42 to honor him.

Jackie Robinson paved the way for black players to eventually move from the Negro Leagues to the majors, including the Yankee’s Elston Howard.Â  On April 15, 74 years ago, Robinson became a Brooklyn Dodger. He was the first African-American in all of baseball to break the color barrier. One day earlier but eight years later, the New York Yankees acquired their first black player in Elston Howard.

Early on, when black players entered the majors, they didn’t have it easy. Some had acceptance problems even from players on their own team. Some could not eat with or stay with their white counterparts. Many eating establishments and hotels at that time still would not allow blacks. When the New York Yankees hired Elston Howard, they made sure that they would only stay in hotels that accepted blacks.

Before the Yankees added a black player to the team, they waited to find the perfect man to add. That man was Elston Howard, a fine gentleman of high moral character. His teammates immediately accepted Elston. He was further endeared to the team and fans alike for his baseball abilities as a catcher and ballplayer.

Elston Howard played for the New York Yankees for 13 years from 1955 to 1967, when he was traded to the Boston Red Sox. During his time with the Yankees, he amassed a .279 batting average withÂ  167 homers and batting in nearly 800 runs. He was a 12-time All-Star, won the Gold Glove Award twice, and was an MVP candidate five times, winning the prestigious award once. In 1982 the New York Yankees retired his number 32 and installed a plaque in Monument Park. Had it not been for a few disastrous seasons late in his career, caused by an elbow ailment, he would surely be in the Hall of Fame.

Jackie Robinson Day has been celebrated every year since 2004.Â  Robinson’s number 42 was retired by all of MLB in 1997. Every year on his day, every on and off-field personnel of all teams wear his number 42 since 2009, celebrating his legacy. In Robinson’s major league career, 10 years with the Brooklyn Dodgers, he batted .311. He was an All-Star six times and was an MVP nominee eight times, winning the award in 1949.

Robinson’s personality was one of high moral values and non-violence that challenged the stereotypical opinion about black men. He was very popular and influenced the culture of the day. He was also greatly involved in the civil rights movement. The Civil Rights Act of 1964 opened public facilities to all races. But the movement against segregation after World War II really began in 1947 with Jackie Robinson. Robinson, after his playing days, was the first black television baseball analyst. He was also vice president of Chock full o’ Nuts corporation. He helped establish the Freedom National Bank, and in 1972 was awarded the Congressional Medal of Freedom for his achievements on and off the field.

Robinson also established the Jackie Robinson Construction Company to build housing for low-income families. He was inducted into the Baseball Hall of Fame onÂ  July 23, 1962. On October 15, 1972, in his last public appearance, he threw out the first pitch before Game two of the 1972 World Series; he died nine days later at his home in Stamford, CT. He died from complications arising from both heart disease and diabetes age the age of 53.