New York Yankees: Is Mark Trumbo the answer to the departing Eric Chavez? 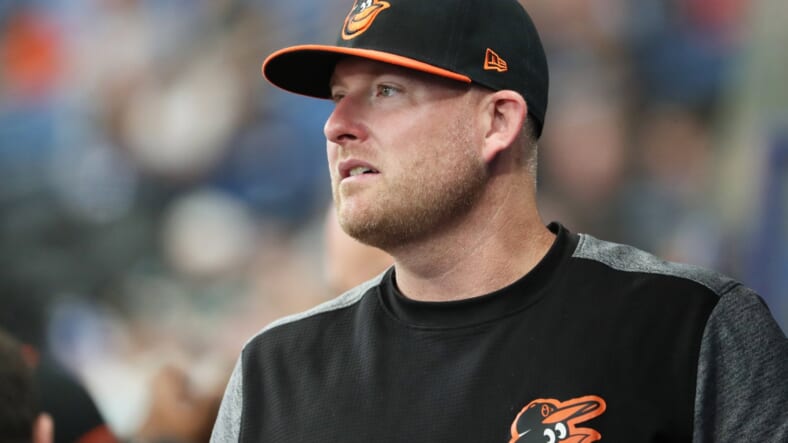 The New York Yankees didn’t do much in postseason 1.0, in fact, they did nothing but sit on their hands while almost half of the free agents available went to other major league teams, while giant holes in the Yankee team remained unfilled. On December 1, a new Collective Bargaining Agreement couldn’t be reached before the old one expired. This caused Commissioner Rob Manfred to institute a lockdown preventing teams from making transactions over even talking to players or their agents.,

One move to date is that Cashman/Boone and company were able to assemble a new coaching staff to replace hitting coach Marcus Thames, assistant hitting coach P.J. Pilittere; they also replaced first and third-base coaches, among others. So here is the coaching lineup for the Yankees:

Just when the Yankees thought the coaching staff had firmed up for 2022, they had a terrible blow. They had also hired Eric Chavez as an assistant hitting coach, but now Steve Cohen and new New York Mets manager Buck Showalter have stolen Chavez away for the Yankees giving him the hitting coach job with the crosstown rivals.

In an effort to replace him, the name Mark Trumbo has been mentioned. Trumbo a former Baltimore Oriole. He also played for the Angels, Diamondbacks, and Seattle Mariners. He was with the Orioles from 2015; He amassed a .249 batting average with 87 home runs over four seasons. He has had a consistent batting career with almost the same average for each team he played for. In 2016 he had a career-high 47 home runs. He would also bring to the Yankees experience playing through injuries, as he has had plenty of them in his career.

Trumbo is “very well thought of [in baseball circles] and a smart and engaging communicator” who’s been connected to a few teams this winter. With the loss of Chavez, the Yankees will be looking for someone with baseball experience. Most of the staff is now analytics-wise but don’t have much experience playing the game.

Manager Aaron Boone and bullpen coach Mike Harkey are the only two on the staff of nine right now that have major league experience after they let third base coach Phil Nevin, hitting coach Marcus Thames and first base coach Reggie Willits go after the season.

It’s a balance that Boone said he was comfortable with, but as a third-generation big leaguer, he certainly understands the value of experience.

“That is absolutely a value and part of a checklist that checks a box for a lot of people. Experience matters; what they’ve done matters,” Boone said last month when the Yankees officially announced their 2022 coaching staff. “But we were also probably closing ourselves off to a lot of really great coaches because in a lot of ways that was a prerequisite.”

“Ultimately, players ask, ‘Can you help me, and are you helping me?’ Ultimately is the biggest litmus test and the biggest factor,” Boone added. “A guy that doesn’t have a big-league resume from a playing standpoint may have to earn his way a little bit more perhaps, but once you demonstrate and show that you’re helping a player, that’s all you want (as a player). You’ve got a short window to have a Major League career, and if somebody from a coaching standpoint is helping me and impacting me in the end, I don’t really care how (he got there).”

Along with Trumbo, the Yankees have many other names to consider to round out the pitching coach staff. One of those is former Yankee Curtis Granderson; however, he has stated that he is not interested in coaching this season. If he is actually offered the job, that may change.