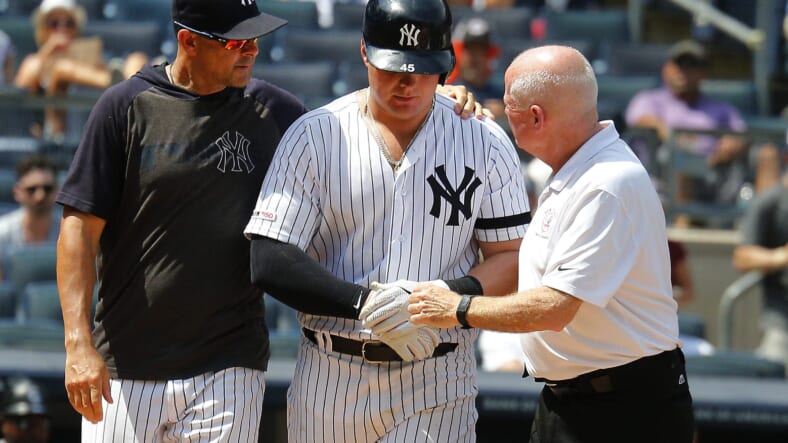 Last season the New York Yankees had an unprecedented number of injuries.Â  Thirty injuries to players that led to 38 separate entries into the Injury List (IL). Because of the exceptional depth of the Yankees and it’s farm system, the team persevered and even flourished with it’s “next man up” mentality, production, and 103 wins on the season.Â  Nevertheless, the Yankees don’t want to see that again this season, but the injury bug may already be showing it’s ugly head.

Just before spring training started, pitcher James Paxton underwent back surgery.Â  Paxton’s surgery became necessary when he was no longer responding to treatment for back pain.Â  Paxton had aÂ  Microdiscectomy. The operation consists of removing a portion of the intervertebral disc, the herniated or protruding portion that is compressing the traversing spinal nerve root. He also had a cyst removed. Luckily for the Yankees, his 3 to 4-month rehab from the surgery, which would have allowed him back into the rotation sometime before the All-Star break, now appears to be shorted to enable his return as early as June. Yet this still causes some concern.

last year Luis Severino had a disastrous spring training first suffering from a rotator cuff injury the led to a lat strain and missing all but two weeks of the season.Â  He returned for three starts in September before making two more starts in the postseason.Â  In his last start of the postseason, he felt soreness in his right pitching elbow, that soreness has continued throughout the offseason and persists today. In addition to that, he has forearm soreness.Â  Today the 26-year-old right-hander will visit team physician Dr. Chris Ahamad to determine what the next steps will be.Â  Manager Aaron Boone when questioned, was unable to answer if Severino would be ready to start the second game of the regular season.

Aaron Judge played in only 102 games due to injuries.Â Â  Those injuries included a left oblique strain that caused him to miss two full months at the beginning of the season. Now since returning to spring training, Judge has had right shoulder soreness that has kept him from throwing and catching.Â  In the 2017 season, Judge needed arthroscopic surgery to fix cartilage in his left shoulder.Â Â  When questioned about his sore right shoulder, he responded:

â€œIt probably started a couple weeks ago, when I first got down here. Iâ€™ve been hitting since early November, and working out since early November, and once I got down here, I hit on the field, hitting outside. I just thought itâ€™d be best to â€” I just felt a little soreness up in the shoulder. Nothing alarming, nothing that I was like, â€˜Hey, we need to really check this out.â€™ So I said, â€˜Hey, we got plenty of time going into spring training, letâ€™s take it slow these next couple days, make sure everythingâ€™s right, and then kind of go from there.â€™â€

With the fear of the nightmare the Yankees suffered throughout the season last year, there is some concern when they start to see injuries again.Â  When Manager Boone was questioned about the Judge soreness, he said:

â€œIâ€™m sure the next day or two, weâ€™ll start ramping him up,â€ Boone said. Boone has also said that this doesnâ€™t seem like anything serious, it seems like usual wear and tear that every baseball player experiences from throwing. This sort of soreness even dates back to when Judge was at Fresno State.

â€œHe had some stuff in there going back to even when he was drafted which, frankly, a lot of people have,â€ Boone said, â€œA lot of people will have different things going on there, kind of typical for most baseball players. It wasnâ€™t much change from that.â€Â  Boone hopes to ramp him up a bit today but doesn’t know if he will be available for the first spring training game on Saturday against the Toronto Blue Jays.

Aaron Hicks has not been injured this season as of yet but will miss time at the beginning of the season due to his rehab from Tommy John surgery.Â  When Hicks was spoken too on Wednesday, he said he felt excellent.Â  Hick was responding well to his rehab, but in September of last year, he suffered a setback.Â  Immediately after the ALCS, he underwent Tommy John surgery.Â  He said that his rehab has gone well, but he believes he will miss the first few months of the season.Â  Hicks said, “I kind of want to start throwing first, and then Iâ€™ll kind of be able to gauge it better from there. But of course, I want to get back as fast as possible.â€

While the Yankees hope to avoid the majority of last year’s injuries, they are putting their hopes on the latest medical and training staff to keep the team healthy throughout the season.Â  The Yankees relieved longtime head athletic trainer Steve Donohue, who began working for the Yankees organization in 1979 and joined the big league club in 1986 under legendary trainer Gene Monahan, he will assume an emeritus role.Â  The new head trainer is Michael Schuk.Â  The Yankees also hired highly respected performance coach Eric Cressey to oversee their strength and conditioning and training departments.Â