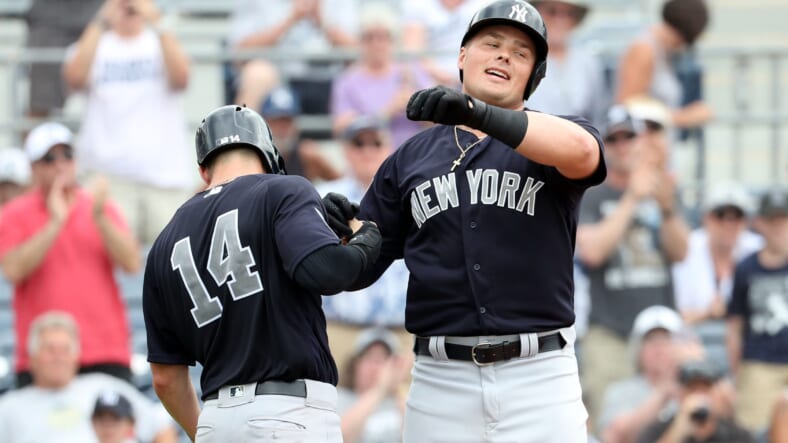 The New York Yankees first baseman Luke Voit is on the verge of experiencing a very unpleasant phenomenon in Yankee Stadium – when the shouts of â€œLuuuuuuuuuuuuukeâ€ suddenly turn to jeers of â€œbooooooooo.â€Â  Not that Iâ€™m advocating such a turn of events – quite the contrary.

Voit was the hero of Opening Day from the cleanup spot, hitting a three-run shot in the first inning with Aaron Judge and Giancarlo Stanton on the bases.Â  He also had two walks and was hit by a pitch.Â  He had a 1.000 day – on base four times with 1 H, 1 HR, and 4 RBIs.

He said to CBSSports.com after the game:

“It felt good off the bat — I did my little Sammy Sosa hop — it felt good to pick up where I left off,” said Voit following the game. “To get that first hit out of the way is always nice.”

In fact, in Tuesday’s game against the Detroit Tigers, the Tigers intentionally walked Judge to get to Voit, which, we all know, canâ€™t happen.Â  While fans want men on base when Voit is at the plate, they donâ€™t want the bat to be taken out of Judgeâ€™s hands.

â€œHeâ€™s one of the guys thatâ€™s good at not going out of the zone and he needs to get back to that,â€™â€™ Boone said of Voit.

So while he might have picked up where he left off last season on Opening Day, he needs to pick it up again.Â  The Yankees’ offense has stalled against both the Baltimore Orioles and the Tigers and Voit’s bat has been part of the problem.

Yankee fans want to see that player who hit .333 with 14 homers and 33 RBIs in just 39 games last season.Â  He ignited the Yankees in August and September for the all-too-brief postseason run.

Coming into the season, Voit and Bird competed hard for the first base position, Â though fans had been told by general manager Brian Cashman that Voit had won the job on the strength of his performance after coming to the team . Â Voit took a few hits for his defense last season, but worked in the offseason to improve with the glove.

In spring training, Voit hit .289 with 4 homers and 12 RBIs in 17 games which was enough to keep pace with Bird, who had an outstanding spring himself, for the first baseman’s position, although the battle was not ultimately decided because Hicks went down with injury and the team elected to carry both Voit and Bird.

Voit is poised to either make the analytics nerds proud or to whiffle into Yankee obscurity, only to be discovered buried in some future history of the Yankees.

With a virtual team on the Injured List, Voit needs to work hard not to land there himself as he’s twice been hit by pitches this season, most recently in Tuesday’s game against the Tigers. Â X-rays after the game were negative and he was back in the lineup on Wednesday.

The Yankees lack of offense is certainly not Voit’s fault. Â The Yankees lost to the Tigers by a score of 2-1 on Wednesday and along the way set a new Yankee record for strikeouts in a game with 18. Â In fact, all 10 Yankees batters struck out in the game.

Voit, as one of the Yankee starters still standing, needs to produce on offense and soon or those calls from the stands he hears won’t be “Luuuuuuke.”