New York Yankees head back to Tampa soon, and continue the COVID-19 fight 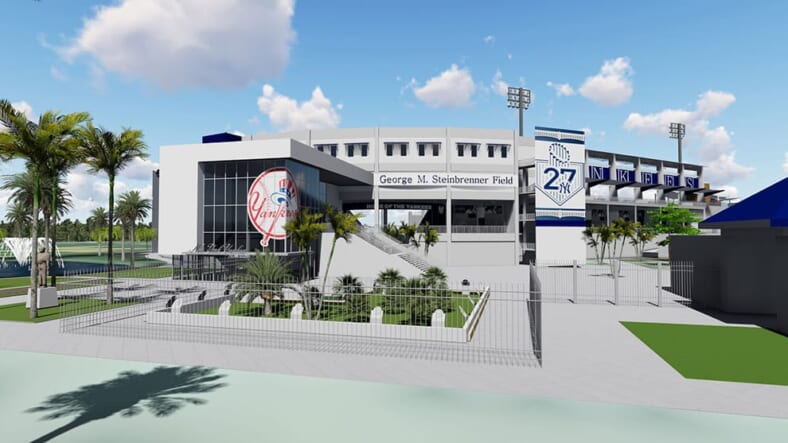 Could spring training start as early as next week?

The New York Yankees mull no less than a dozen plans to get the boys of summer back on the field.Â  It should be noted that MLB has no starting time for a season to begin, but it does appear to be getting closer.Â  The plans for a regular-season includes two different geographic plans, A situation that would involve all games for all 30 teams played in Arizona seems to be losing support.

One of the newest plans is to realign teams to play in three divisions regardless of league affiliation.Â  For the New York Yankees that would mean they would be playing against all AL East coast AL teams, including the Toronto Blue Jays.Â  It also means they would be playing against the Pittsburgh Pirates, the Philadelphia Phillies, the Washington Nationals, and the Florida Marlins of the National League.Â  The teams in the center of the country would be banded into the Central League, and the West coast teams with the addition of the two Texas teams would make up the West League or division.

The latest plan seems to be gaining favor.Â  There is also a plan out there that would have spring training start at home stadiums.Â  This writer feels that is unlikely as major baseball hubs like New York City, Chicago, and Los Angeles are still dealing with many new cases of the coronavirus daily and are still under stiff restrictions.Â  Although Bob Nightengale of USA Today said this is possible, NYC Major de Blasio said Yankee Stadium will not be used until August at the earliest.Â  It is more likely that as spring training starts, teams will find themselves in the traditional Florida and Arizona locations.

There are several reports that the New York Yankees may be headed to George M. Steinbrenner Field in Tampa, Florida as early as this weekend. Some half dozen or so Yankee players are already in the area.Â  We know that at least Aaron Judge, Giancarlo Stanton, and Luis Severino are at the facility. The Yankees may be looking at starting some spring training activities sometime next week.

At present, the general consensus is that a regular-season could start as soon as the last week of June or early in July.Â  But that timeline is dependant on a reduction in new cases of the virus and the availability of wide-spread testing.Â  When the season actually starts will be up to MLB and health officials, and will likely start with no fans in the stands.Â  A more concrete plan to start baseball should be forthcoming in the next two weeks.

The latest New York Yankee to step up to the plate and provide for coronavirus relief is none other than General Manager Brian Cashman.Â  Cashman is no stranger to causes such as efforts to keep children from going hungry to bringing attention to the needs of the homeless.Â  Cashman on May 14 will have a virtual experience at the Family Center. The minimum $25 dollar participation fee with go to the Family Centersâ€™ Emergency Family Assistance Fund.Â  The organization has turned their efforts to aid hard-hit Fairfield County, CT, residents most affected by the coronavirus.

Yankee outfielder Giancarlo Stanton is working with Voodoo Manufacturing to supply health workers in California and New York with hard reusable face shields.Â Â Â  The original shipments will be 6,000 new shields to both locations and an additional 3,000 to follow.Â  Stanton in addressing the needs of the health field said that this is not the end, he will continue to investigate needs and will act as he evaluates needs.

“Obviously we’ve never seen anything like this. It just seems like every new notification on our phones, or however we get our information, isn’t positive. You’ve got to keep moving forward, see what you can do while staying at home.” Stanton said.

Many other New York Yankees players have made donations and giving aid in many ways to lessen the impact of the coronavirus.Â  Aaron Judge has recently empowered Bronx, New York children in need, as they adapt to classes online.Â  Judge has donated thousands of headphones to help with those classes.