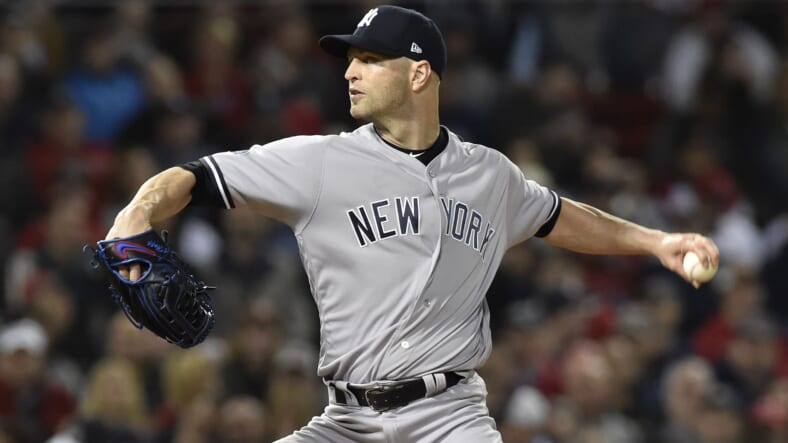 The New York Yankees fell to the Tampa Bay Rays in game two of the ALDS on Tuesday evening. In what started off problematic for the Bombers, only ended up worse, as their pitching faltered and their offends sputtered to a halt.

An emphatic win in game one did not provide the momentum the Yankees needed to secure game two and take a significant advantage in the series. The Rays clawed their way back in, with starting pitcher Tyler Glasnow lasting five innings and allowing four and runs.

However, he struck out 10 batters, as the Yankees totaled 17 strikeouts on the evening. The Raysâ€™ bullpen was also effective, limiting the Yankees to just one hit over four innings.

The good news, Giancarlo Stanton has finally found his postseason form. He launched two homers and was responsible for all four of the Yankees runs. His homer in the second inning just barely reached the right-field wall, tying the game at one.

In the fourth inning, he launched a behemoth blast that drove in Aaron Hicks and Luke Voit. The crack of the bat was all you needed to hear to know that his home run was monstrous.

Aside from Stanton, the only other Yankees that managed to record hits were Aaron Hicks, Clint Frazier, and DJ LeMahieu. Otherwise, a majority of the lineup struck out consistently.

Unfortunately, game two had more negatives than positives in comparison to game one. Offensively, the Yankeesâ€™ best hitters struck out a problematic number of times.

Leadoff hitter DJ LeMahieu uncharacteristically went down twice and Judge struck out three times. Voit also had a strikeout hat-trick and the bottom of the order was saved from embarrassment by one Frazier hit.

As for their pitching, the New York Yankees utilized an interesting ideology going into the game. They started Deivi GarcÃ­a but pulled him after just one inning. Racking up 27 pitches to start the game was an issue, and management made the executive decision to replace him with J.A. Happ.

Over 2.2 innings, Happ allowed four earned runs and three walks. Overall, he was awful and put the Yankees in a terrible spot. The bullpen wasnâ€™t much better, as Adam Ottavino allowed one run, and Jonathan Loaisiga did the same. They made it all the way through their bullpen and landed with Nick Nelson to close out the eighth inning, as he struck out two batters.

The Yankees’ loss to the Rays was mainly due to their ineffective pitching. Their starters were questionable and the bullpen failed to get the job done. If not for Giancarlo Stanton, the game might have been a blowout.

The Yankeesâ€™ 18 strikeouts on the evening was a postseason record for the franchise. They cannot replicate such a number in game three if they wish to move forward.