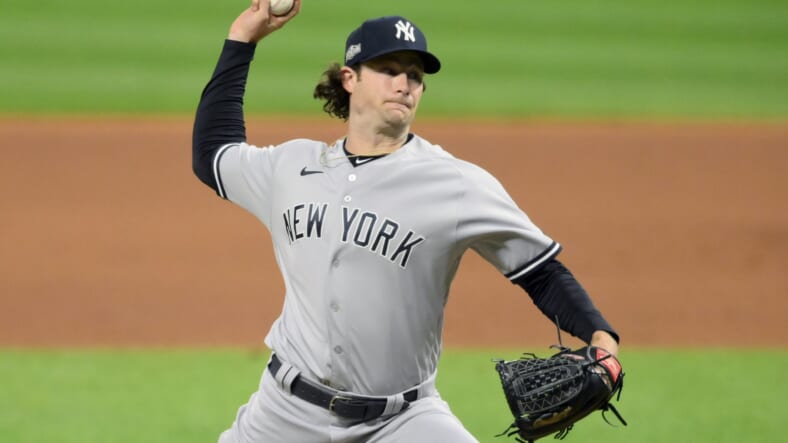 The New York Yankees escaped game one of the ALDS against the Tampa Bay Rays with a massive victory. With Gerrit Cole on the mound, the opener of the series was essential for a Yankee team that often goes on lengthy cold streaks.

Securing game one gives the Yanks a significant advantage heading into game two, with youngster Deivi GarcÃ­a taking the mound.

The Yankees have been tortured by the Rays all season long, and they made an emphatic statement, thanks to some timely homers by their more consistent hitters.

Good news, the Yankees were clicking on all fronts, and the offense played as well as we could have hoped against fantastic pitching.

Offensively, they racked up 13 hits and struck out six times, a fantastic ratio. Lead-off hitter DJ LeMahieu had two hits and Aaron Judge launched a home run in the fifth inning to secure the lead for the Yankees.

However, to start the game, the Bombers managed to strike first, with Aaron Hicks hitting a sacrifice fly to center, driving in LeMahieu. Both Clint Frazier and Kyle Higashioka hit solo homers to help their cause and ultimately pushed the Yankees over the edge.

As for the Yankees pitching, starter Gerrit Cole lasted 6.0 innings, allowing three earned runs and striking out eight batters. His kryptonite this season has been Ji-Man Choi, who launched a two-run homer in the fourth inning to regain the lead. Cole did not back down from the challenge, though, as he consistently hit the upper 90s with his fastball, despite reaching the upper 90s in pitch count. This was about as great an outing against the Rays as you can hope for; the Yankees managed to produce just enough offense.

The 9th inning was the catalyst for the Bombers, who gave Giancarlo Stanton a bases-loaded opportunity.Â  He did not disappoint, launching a grand slam, his eighth career salami.

-Gerrit Cole was the first Yankee with eight strikeouts in back-to-back postseason games since Roger Clemens in 2001.

-Cole’s strikeout of Manual Margot in the fifth inning came at 100.1 mph, the fastest pitch heâ€™s thrown this season.

-The Yankees are the first team in MLB history to hit 3+ home runs in each of the first three games of a postseason.

There wasnâ€™t much bad news from the victory, as baseball is a game of inches and a win was all you couldâ€™ve hoped for. Considering the Yankees are 11-18 playing away this year, securing game one was essential. They posted four earned runs on Blake Snell, who is one of the more dominant arms is in the league.