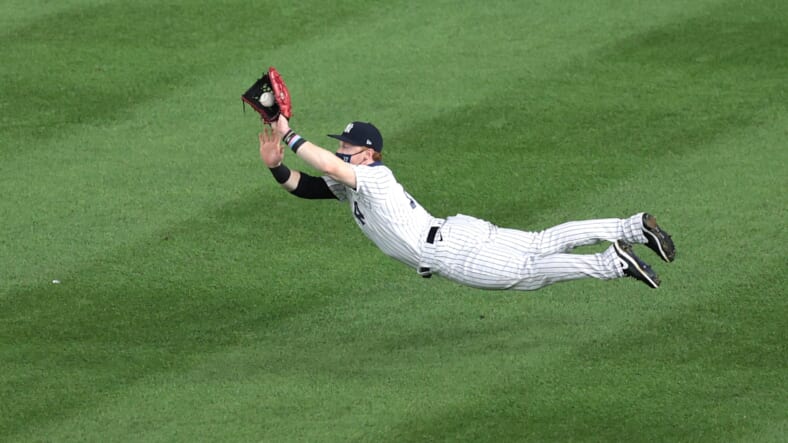 In a few minutes, Major League Baseball will reveal the winners of the 2020 edition of the Gold Gloves, awards that recognize defensive excellence in both leagues. The New York Yankees, as you already know by now, have two players nominated: Gio Urshela at third base and Clint Frazier in right field.

To be fair, most experts, players, coaches, managers and fans weren’t surprised to learn that Urshela was nominated. We have seen him flash the leather from the New York Yankees’ infield in the bright lights of October, as well as in the regular season, for the better part of the last two years.

But to see Frazier having a very good defensive year after struggling so much with the glove to start his career, misplay fly ball after fly ball, and post horrid defensive numbers throughout his big league tenure, is especially refreshing.

That is why, Gold Glove or not, the Yankees have to be very pleased with Frazier. Known for having a little bit of an attitude problem in the past, he decided to put in the work during the offseason and be a better fielding outfielder. The difference is evident. It is night and day.

The Yankees have themselves a good one

Frazier is now a comfortably above-average fielder according to Outs Above Average (a Statcast metric, where he finished in the 82nd percentile) and outfielder jump (58th percentile.)

Yankees’ fans will also be happy to know that Frazier graded out positively in other metrics. In DRS (defensive runs saved) he had a +4 mark in 216.0 right field innings after finishing last year with -6. He also had a 3.8 UZR and 24.0 UZR/150.

You could see in his routes, in his effort and his overall attitude that Frazier wanted to be a great defensive outfielder. And now, he is a Gold Glove nominee!

He will compete with Anthony Santander and Joey Gallo. But it doesn’t matter if he wins or losses: the Yankees, and the player himself, already won.