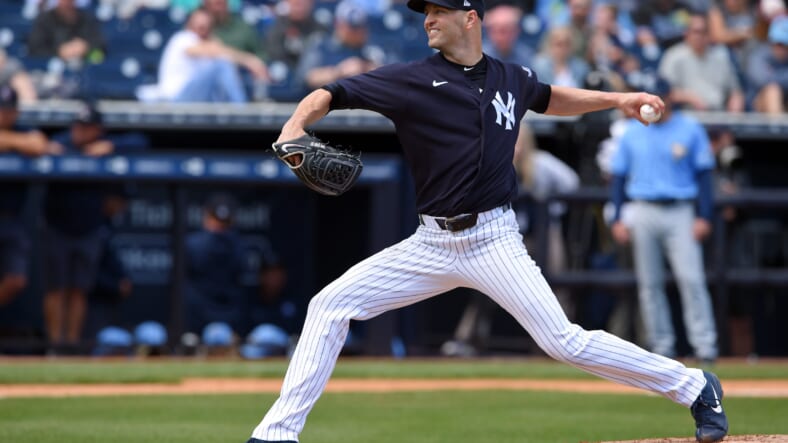 When the beginning of the 2020 offseason began, everyone knew the signing of an ace starting pitcher would be in the near future. General manager Brian Cashman made it known that the New York Yankees wouldn’t go quietly into the night. Unloading $324 million on Gerrit Cole sent a vibration throughout the MLB that shattered records.

Cashman made Cole the highest-paid pitcher in league history, but one of his better decisions came toward the end of the starting rotation. While most clamored on about J.A. Happ and why he should be released/traded effective immediately, Cashman stood his ground, likely informed of the discomfort Luis Severino had been facing this offseason.

Happ had a tumultuous 2019 campaign, finished with a 12-8 record, 34 homers allowed (career-high), and a 5.57 ERA through August. The Yankees barely used him in the postseason due to his inefficacy on the mound.

The New York Yankees might be getting the old J.A. Happ back:

This spring has told a different story for Happ and his lack of confidence from last season. His fastball has been excellent, painting corners and generating easy outs.

â€œI really wanted to throw strikes from the get go,â€ Happ told reporters after his outing. “Iâ€™m better when I do that. So thatâ€™s my main focus … attacking.

Happ threw 30 strikes out of 40 total pitches, which he was happy with. The lone run J.A. allowed on Thursday came by a pop-fly that sneakily landed right before the right-field foul line, allowing a double and a run scored. However, the other nine hitters that walked up to the plate were retired. He forced six ground-outs, two strikeouts, and a fly ball.

â€œThe crispness on his fastball, which we saw return kind of return to that J.A. Happ level late last season, I feel itâ€™s carried over into this spring so far,â€ Boone said.

The Yanks desperately need Happ to return to his 2018 form, as losing Severino for the entire season and James Paxton for months will undoubtedly hurt the efficiency of the rotation.