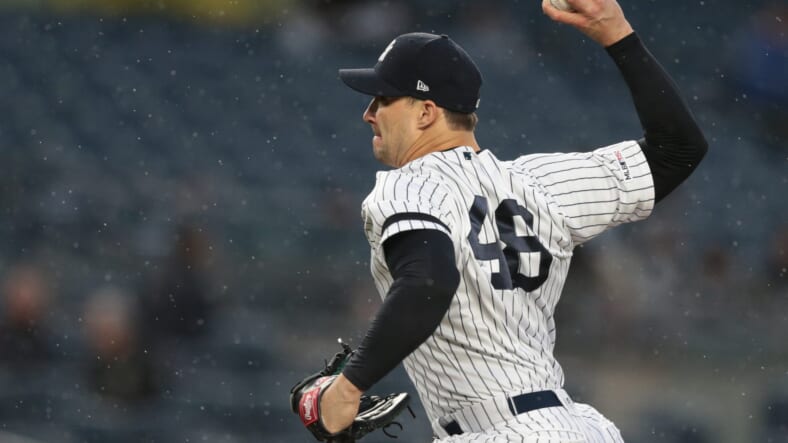 The New York Yankees lost a very important piece of their bullpen at the dawn of the shortened 2020 season. Tommy Kahnle, one of the most dependable relievers of the past three years, injured his elbow and required Tommy John surgery, immediately putting a cloud over his future with the franchise.

As a result, the hard-throwing right-hander lost nearly all the 2020 season and will be out, at the very least, until late next season. There is a strong possibility that we won’t see Tommy Kahnle until 2022.

Recently, the New York Yankees outrighted Kahnle off their 40-man roster and, instead of a minor league assignment, he elected to become a free agent. Since he hit the market, he has received plenty of interest from major league teams, according to MLB Network’s Jon Heyman.

Heyman reported on Monday that Kahnle is considering “multiple” two-year offers. He was very effective with the Yankees and teams noticed that. Relievers are always in high demand, so clubs are willing to let him “redshirt” the 2021 season and then essentially having him back in 2022.

Would the Yankees be interested in a two-year pact?

Of course, if teams want to secure Kahnle’s services now, it wouldn’t make much sense for them to sign Kahnle to a one-year deal, since he is going to miss the majority of the 2021 season after the reconstructive elbow surgery, which he had early in August.

In the one inning he threw this season, the Yankees’ hurler allowed no runs and struck out three batters, with one walk. He is known for his excellent changeup, a more dangerous weapon than his four-seam fastball.

It’s unclear if the Yankees would be interested in bringing him back on a two-year deal given their needs for the 2021 season, but the possibility of Kahnle returning to the Bronx can’t be dismissed.