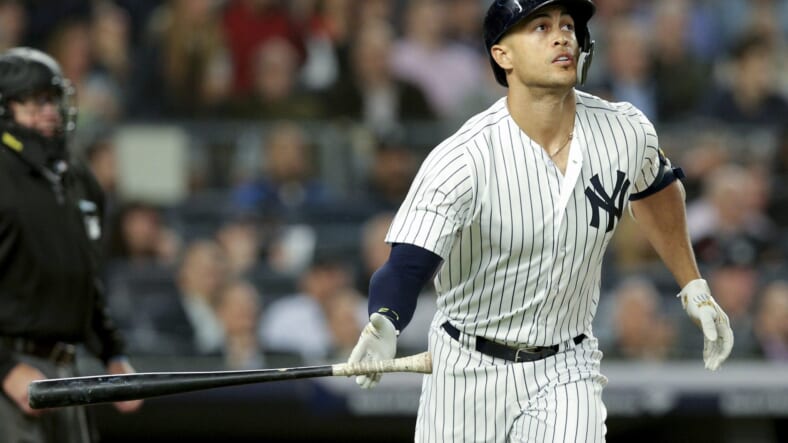 Giancarlo Stanton played in his tenth game Wednesday night for the New York Yankees against the Los Angeles Angels. He looked strong and healthy in everything he did last night.

“(It was) encouraging,” said manager Aaron Boone on Stanton. (He) got off some good swings,Â obviously the double, smoked the ball back up the middle. Made a great throw to the plate early… I thought he was moving [well] on the bases.”

Getting behind in the count 0-2 in his first at-bat, Stanton slugged a double into the left-field gap. Running the bases he looked well and comfortable, which is a great sign for the Yankees.

His second at-bat he grounded out but still hit the ball very hard. Having his bat back in the lineup who provides consistent high power regardless of what he does is huge for the lineup.

Boone had originally planned to have Stanton go half the game, “I only planned on going four, maybe five innings there, but he was doing well and we kind of talked through it there in that fifth, â€˜You want to go back out for the sixth and get that last at-bat?â€™ And he did.”

As the New York Yankees prepare for the postseason, having Stanton’s bat back in the lineup in monumental. He’s able to go on tears where he’s terrifying at the plate.

The 29-year-old is expected to be back in the lineup tonight for the final game of the series against the Angels. A win tonight could clinch the AL East for the Yankees and bring them to their 100th win.