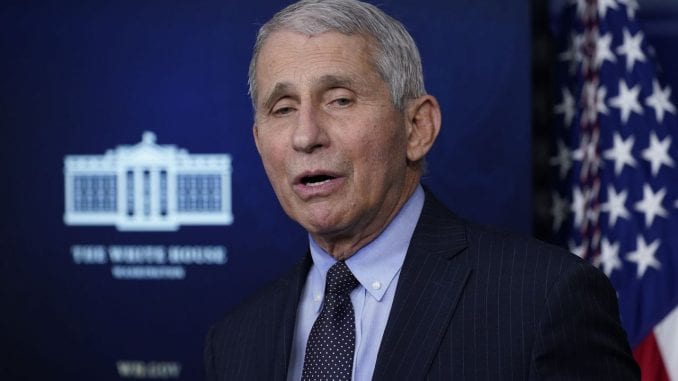 The New York Yankees front office and fans alike are from mildly to wildly happy that on Opening Day today, 10,840 fans will be allowed into Yankee Stadium to view the first game of the 2021 baseball season. The front office is mildly happy as it will allow them to make some revenue, but at only approximately 20% of capacity, they won’t make money; they just won’t lose as muchâ€”Yankee Stadium on average fills to 41,827 (2019), which is about 80% of capacity.

But there may be good news on the horizon. This morning on the CBS morning news Dr. Anthony Fauci said at some point during the 2021 baseball season, we will return to 2019. “you heard it here on CBS.”

Dr. Anthony Stephen Fauci is a physician-scientist and immunologist who serves as the director of the U.S. National Institute of Allergy and Infectious Diseases. He was a coronavirus advisor to President Trump, and under the new administration, he is the chief medical advisor to President Joseph Biden. Although the 80-year-old immunologist-scientist has served American public health in various capacities for more than 50 years and has been an advisor to every U.S. president since Ronald Reagan.*

Most of his public health work has been behind the scenes, and most Americans never heard of him. But with the worst virus to hit the United States in the last hundred years, he became the font of the most reliable information, keeping Americans informed nearly daily on their television sets. The coronavirus has made him a medical rock star. When Dr. Fauci speaks, people listen.

Last season as the virus ravaged the country, baseball fans lost out by not attending their local ballparks around the country. Only during the last few games of the postseason were a few fans allowed in stadiums. Now, if Dr. Fauci is to be believed, when this postseason rolls around, stadiums like Yankee Stadium may see near-capacity crowds enjoying the New York Yankees on their way to a 28th World Championship. That statement is from me, not Dr. Fauci. Dr. Fauci is a lifelong New York Yankee fan.

Last season he threw out the ceremonial first pitch at the Yankees Opening Day at Nationals Park in Washington, DC. The embarrassing pitch went more toward the first baseline than the National’s catcher. In a digital interview with the YES Network’s Jack Curry, the Brooklyn native Fauci explained his love of the Yankees:

“We had a whole culture,” he explained, looking back half a century ago in his mind. “It was Duke Snyder versus Mickey Mantle. Yogi Berra versus Roy Campanella. Pee-Wee Reese versus Phil Rizzuto. We used to follow their batting averages that I could tell you on any given day in elementary school exactly what the point up or down in Yogi Berra’s average was, or Mickey Mantle or anybody.”