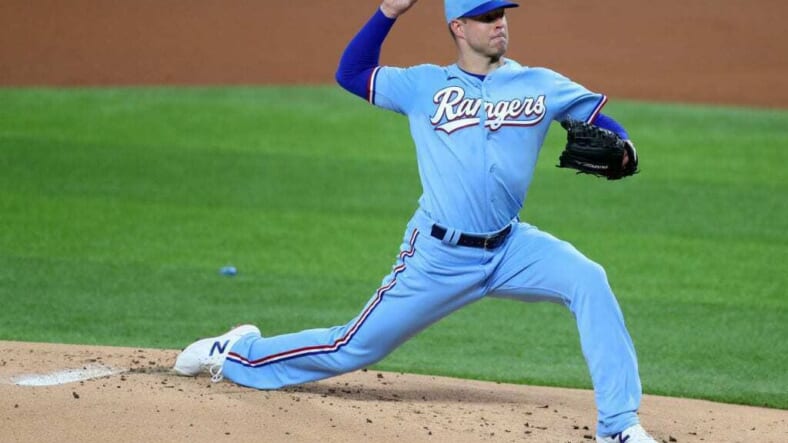 ARLINGTON, TEXAS – JULY 26: Corey Kluber (28) of the Texas Rangers pitches against the Colorado Rockies in the top of the first inning at Globe Life Field on July 26, 2020 in Arlington, Texas. (Photo by Tom Pennington/Getty Images)

The New York Yankees have several pitchers on their way back in 2021, including Luis Severino and Domingo German. Severino has been rehabilitating from Tommy John surgery while German was living out the rest of a suspension he picked up last year due to a domestic violence case.

The Yankees were noncommittal when it came to the retention of German â€” justifiably so. However, the addition of Severino will be a significant deal, as he should pair well with Gerrit Cole.

Severino has been a bit inconsistent the past few seasons, with a notable 2017 performance, when he finished with a 2.98 ERA, striking out 230 batters over 193 innings. He backed up his performance in 2018 with a 3.39 ERA. He pitched just 12 innings in 2019 before being shut down and suffered another significant injury this past spring training.

Corey Kluber is now a free agent. Could the Yankees be his next team? Pitching coach Matt Blake worked with Kluber in Cleveland, and Kluber has worked out in previous offseason with Eric Cressey, who is New York's Director of Player Health & Performance.

Kluber pitched just one inning this past year for the Rangers but had been stellar for the Cleveland Indians in a larger sample size. He pitched nine years with Cleveland, with notable performances between 2016-18. In 2017, he finished with a 2.25 ERA, striking out 265 batters over 203 innings. He won the Cy Young award and ranked seventh in MVP voting. Heâ€™s only three years removed from his most impressive performance, so the Yankees investing minimal capital on him as a high upside player is not a bad idea.

This past season, Kluber was on a one-year, $1 million deal with the Rangers after being traded by the Indians. He is now a free agent, and the Yankees might be inclined to invest capital on him for one season.

The Rangers declined his $18 million club option for 2021, which opens the door for the Yankees, who are in need of starting pitching. He did suffer a broken forearm in 2019 and a grade 2 shoulder tear in 2020, which has significantly dampened the optimism around his game. It will take time for him to return to form, but it is possible he never sees the same caliber performances he enjoyed in 2017, but he could still be of value.

If the Yankees are looking to save salary cap after a tumultuous 2020 campaign due to COVID-19, taking a flyer on Kluber is not a bad idea.