New York Yankees: Could Miguel Andujar beat out Clint Frazier in the outfield? 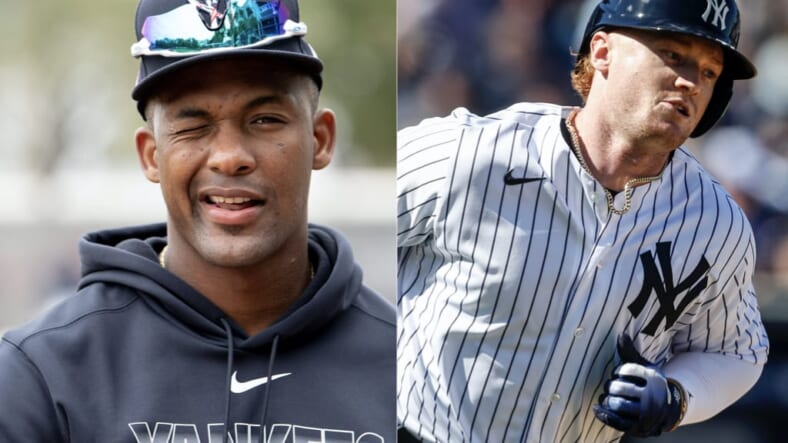 With the New York Yankees dealing with a significant amount of injuries in the outfield and pitching corps, they were forced to utilize other talents to supplement their losses. One of the players forced into an unfamiliar position was third baseman, Miguel Andujar. Andujar suffered a torn labrum in 2019, losing the starting third base spot to Gio Urshela, who blossomed into a regular starting player.

Urshela, who had previously had a career-high .233 BA in 2018 with the Toronto Blue Jays, exploded onto the scene for the Yankees, hitting .314 with 21 home runs and 74 or RBIs over 442 at-bats. He became a staple on the defense and a consistent hitter in the batting order.

Ultimately, Gio has the first crack at the third-base position, and given his consistency, the spot seems all but secured by the Columbian international. Andujar, on the other hand, has had to make a change in his game, spending time in left field and at first base this spring training.

So far, Andujar seems to be a realistic reserve option in left field, as he looked comfortable handling pop flies and line drives.

Can Miguel Andujar overtake Clint Frazier in the outfield for the New York Yankees?

Considering Frazierâ€™s experience in the outfield, it is unlikely that Andujar will overtake him as the starter on opening day in just three weeks. The former third baseman has had a rocky spring training at the plate, finishing with a .217 batting average with one home run. Clint, on the other hand, logged a .353 batting average with one homer and two RBIs over 17 at-bats. Obviously, these are small sample sizes to consider, and Andujar is traditionally the better offensive player. However, his loan season of productivity in 2018 must be taken with a grain of salt, considering he missed nearly all of 2019.

At this point, we can say that Frazier will most likely be the starter in the outfield against the Baltimore Orioles on March 26. With Aaron Judge, Giancarlo Stanton, and Aaron hicks all set to miss time, the Yankees will have to supplement their absence in the meantime. I wouldnâ€™t be surprised to see Miggy earn some starting reps in the first few weeks of the season, though.